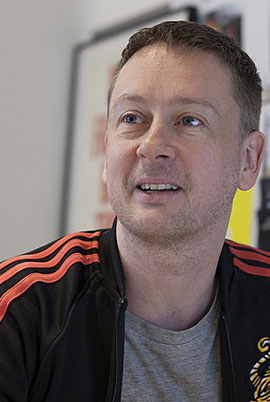 A lot of things have to come together perfectly to make a great ad.

An almost Herculean task, like trying to get a good coffee on a train or a cheap pint in London. But maybe not as hard as getting Brexit done.

Before the creatives even take the lids off the lovely smelling N50s, there’s the tough world that exists client side, as well as strategy and research.

And even when a brilliant idea is beautifully scripted, there’s cinematography, editing, music, the weather, dwindling budgets, tighter restrictions and, in the worst cases, distracted viewers.

So before I say "that ad’s better than those", let’s first celebrate all the work that’s made it on-air - and this award.

Having said that. Cadbury’s ‘Fence’ is the ad that’s hitting the spot for me. It takes a real, familiar truth and tells the story in a way I’m convinced will connect with all but the most distracted.

This heart-warming spot features a lonely old man who tends his immaculate garden through fair weather and foul and is constantly (sometimes with a grimace of irritation) throwing back the balls and whatnot that fly over the fence courtesy of the noisy kids next door. The kids, at long last acknowledging Mr Thompson’s generous nature, throw over a bar of Dairy Milk… and a couple of faces appear above the fence to tell him he doesn’t need to throw this one back.

Our favourite bulldog brand ambassador puts the Chill into Churchill by hopping onto a skateboard and gliding around some downtown city streets to a backing track of Britney Stoney’s soothing 2018 track, O.D. What better way to show the company’s commitment, in an increasingly complicated financial world, to making things easy for its customers? There’s no traffic, the sun is shining, it’s a beautiful summer’s morning. As the pay-off has it: "Isn’t this how insurance should make you feel? … Oh yes."

3. The Guardian 'Hope is Power'

The brief here was to reinforce The Guardian’s positioning as a brave voice of challenge. In this high-concept film, we see a butterfly, trapped in a bare and slightly sinister room, fluttering relentlessly against the glass of its closed window. As the backing music (Nothing Changes from the Broadway musical Hadestown) suggests, this is a pointless struggle. Or is it? At last, the glass shatters and the butterfly is free, proving, clearly, that "change is possible" and that "hope is power".

The cute conceit in play here is the notion that it’s possible to create an ad so powerful that it can turn the most virulent Marmite haters into Marmite lovers. We don’t see this brainwashing ad, clearly, only its effects, as a bunch of newly-converted Marmite fans curse the company for conjuring up such fiendish powers of persuasion. A funny new take on the established notion that there’s no middle ground when it comes to the brand.

5. National Citizen Service 'No We Can'

NCS exists to foster a sense of independence in young adults and so its latest ad evokes a whole generation on the march. Co-created by teenagers and featuring NCS grads, it’s an energetic montage of young adults being patronised, put down, misunderstood and told they can’t do all sorts of stuff – only for them to respond politely, firmly: "No… We can!" The TV campaign is part of a broader Government-funded "No We Can" initiative launched back in the summer.