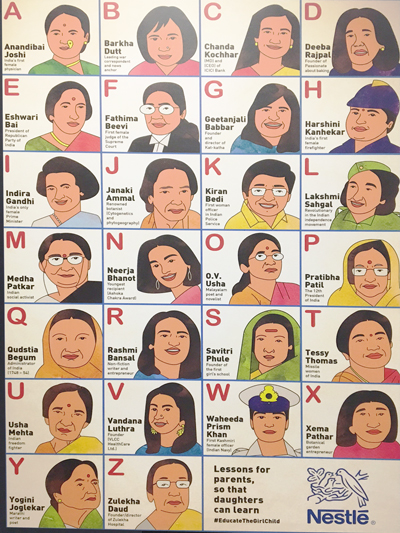 The latest staging of India's Zee Melt marketing festival took place in Mumbai last week and afforded outside speakers like myself an immediate read-across from its thriving market to our own.

The Indian advertising market has grown threefold over the last decade, positively hums with ambition and is now home to some of the world’s very best agencies and practice…but is not without its problems.

The three-day conference is set up unapologetically at the crossroads of marketing, advertising and ‘tech’. It’s part trade show, part festival with four stages dedicated to all manner of workstreams and a dizzying array of speakers. (the black and yellow taxi that dodged its way, horn blaring, from my hotel to the venue comprised experts in pricing, VR filmmaking and advertising: a festival in miniature).

Like the city that hosts it, Melt thrives on chaos and common themes quickly crystallise.  For this first-time speaker and visitor, four things leapt out.

I was followed on stage by Sonal Dabral, the charismatic chairman and chief creative officer of DDB Mudra Group, and by our very own Dave Trott, brooking no argument in his time-honoured style.

And what was obvious, refreshingly so – not just from their bearing on stage but from the audience’s rapt attention – was that creative leaders still rule the roost here, or at least command an unfair share of attention and authority.

An industry at a crossroads

For all the growth that India’s advertising market has seen over the past decade, there’s been a countervailing collapse in agency margin (as lamented by the energetic Publicis Communications India chief executive Saurabh Varma) such that agency income has stayed steady or declined. This despite the new strategic and executional expectations from agencies "beyond the TVC". (Sound familiar?)

There was much talk both on- and off-stage about whether creative agencies should reinvent themselves wholesale to re-capture that margin (some of Varma’s favourite work was not advertising at all, but genuinely creative problem-solving nonetheless) or proudly stick to the knitting.

Consensus seemed to lean towards the former, for all Dave’s spirited scepticism about ‘tech’ as the answer to everything.

An obvious appetite for learning

Watch out, mature markets and especially any arrogant practitioners: these boys (and just now it is boys: see below) are coming to eat your lunch.

There’s a palpable sense not just of ambition and experimentation at large in India’s advertising corridors, but also of a desire to learn: from best practice, from others, and even from the past.

We, too, need to keep the flame of learning alive or accept that we will be slowly displaced on the global stage.

This is a man’s world

Here’s the but.  For all the diversity of delegates, the speakers at Melt were, overwhelmingly, male.

In fairness to the organisers – and to the ad industry – this problem runs way deeper: India remains obstinately patriarchal, so much so that a woman finishing top in India’s civil servant exams makes front page news in The Times of India.

So it was encouraging that Melt also hosted a brilliant exhibition of print advertising – sponsored by that same newspaper – designed to make a dent on the appalling prejudice suffered by "Educating the girl child", 20 million of whom miss out on education and 30% of whom are married before the age of 18.

From a ‘class photo’ depicting a family whose living standards and pride had been lifted by a girl’s education to a classroom alphabet listing an A to Z of inspring Indian women, it showed our industry at its very best.

Yes, advertising is part of the problem here, as it is elsewhere.  But it’s our great privilege as an industry that it can also be part of the solution.

Laurence Green is co-founder of 101

Listen to your idea rather than the feedback

Maxus will live on in India despite MEC merger