The Paralympic Games is poised to reach its biggest ever global media audience, according to the International Paralympic Committee (IPC).

The IPC says there has been a 30% increase in territories showing the Paralympics since 2012 and predicts the Rio Games will reach a cumulative global audience of four billion for the first time.

Alexis Schaefer, commercial and marketing director at the International Paralympic Committee, said: "The Paralympics has witnessed incredible growth over the past few decades and we have seen especially how the Paralympic stories of extraordinary human achievement resonate with the general public and with our sponsors."

According to Schaefer, this growth will continue with the next summer Games taking place in Japan where the Paralympics has a big following. However, experts in the industry have argued that brands are being too slow in taking full advantage of the marketing opportunity of the Games.

The global TV audience for the London 2012 Paralympic Games was 3.8 million, which matched the worldwide audience of the Beijing Games in 2008, according to to the IPC.

Beijing's audience marked a huge boost from Athens in 2004, which reached 1.9 million, and Athens in turn was an impressive improvement from the 300 million people watched Sydney 2000. 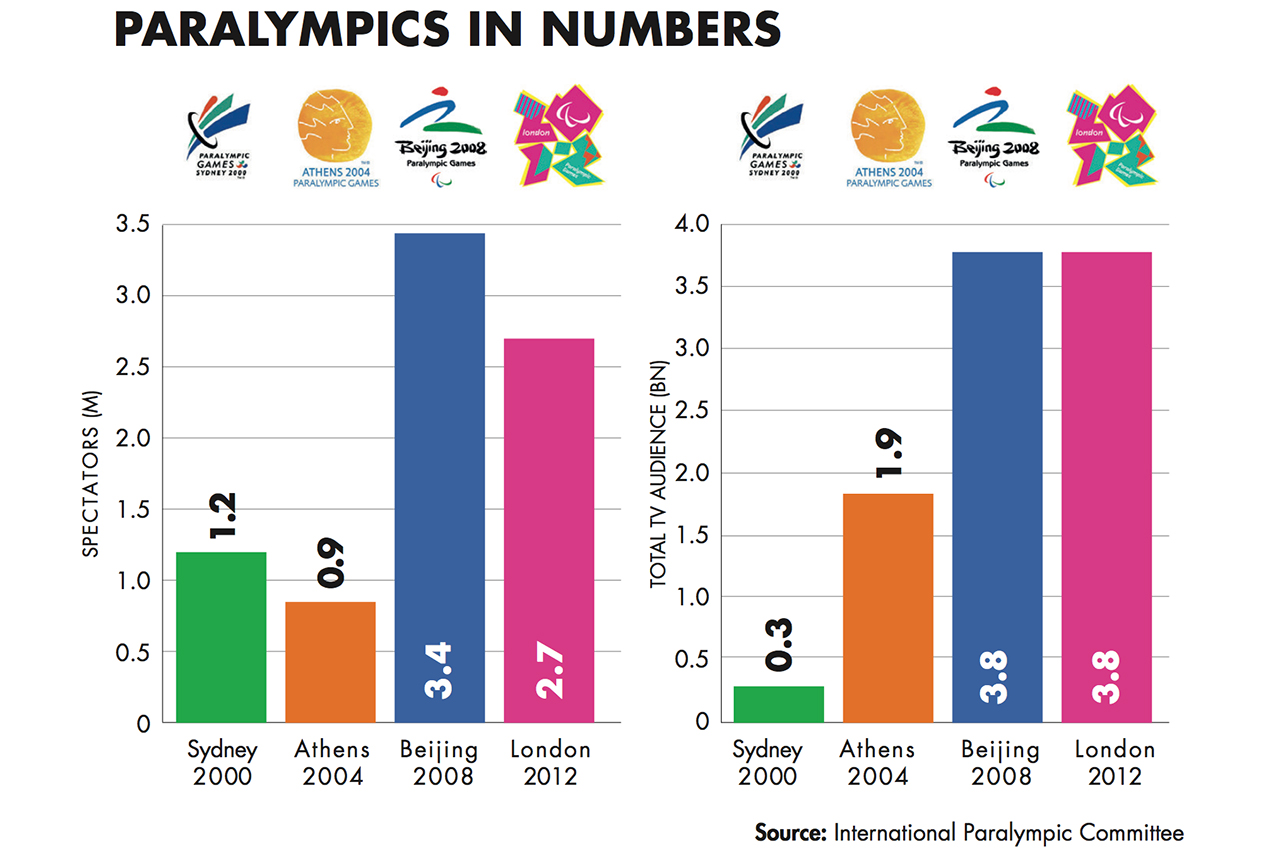 According to Channel 4, the UK broadcaster of the Paralympics, almost 40 million people, or more than two-thirds of the UK population, watched the Games on TV in 2012. This equated to a 251% increase in daily reach compared to viewing of the 2008 Beijing Paralympics. The 2012 Games reached a peak viewing level of 11.6 million for the opening ceremony, Channel 4’s biggest audience in more than a decade.

Dan Brooke, chief marketing officer at Channel 4, said the broadcaster is to the Paralympics what NBC is to the Olympics, which means key events will be scheduled in its favour. He explained: "We have a lot of big medal events for athletes from Great Britain that will play out in British prime time."

And while Brooke said that Channel 4 doesn't expect to top the ratings high of the "home advantage" that London delivered in 2012, this doesn't negate the power of the Games as a marketing platform.

Last night's opening ceremony achieved an average audience of 1.3 million between 9pm and 1.30am, 12.3% of the available audience. The audience peaked with 2.2 million at 10pm. The programme’s share of the total TV audience peaked at 11.30pm with 19.1%.

Twitter said there were more than half a million tweets globally about the Paralympics opening ceremony last night (data was not available for the 2012 Games).

In the UK, brands including Sainsbury’s, Samsung and Nissan took advantage of that power with Paralympic-themed ads in the first ad break of the opening ceremony. The Games also included the premiere of three Maltesers ads featuring disabled actors, the winners of Channel 4’s £1m Superhumans Wanted competition for the Paralympics. The ads were applauded by viewers on Twitter.

Loving the @MaltesersUK ads in the #Paralympics break! Hope they'll be shown during other programming #malteasers

Take a bow #malteasers. The adverts on Channel 4 during the #Paralympics were fabulous. Disability is part of life, let's not hide it.

Nearly spat my drink out there! Bravo #Malteasers - those should be your mainstream adverts!! #paralympics

Loving the #malteasers adverts playing in the #Paralympic ad breaks ... More of this all the time pls ...

Brooke said that while the UK is a pioneer in the Paralympics, the country "has still got a long way to go before we become a truly equal society".

Pointing to research from Scope, which shows that 20% of the UK population has a disability, Brooke said there is still a dearth of representation in the media: "When you turn on the TV, look at ads and newspapers it is a different world, and disability is invisible."