Alex Holder, a former advertising executive, believes that talking more openly about money could have a transformative effect on people's lives and careers.

Alex Holder, a self-proclaimed "advertising runaway", recalls an incident at one of her former agencies when someone from accounts left a notepad in a meeting room that contained the names, current wages and salary increases of eight colleagues. The page was photocopied and passed around the agency, revealing a disparity of salaries ranging from £22k to £130k.

The highest earner was, unsurprisingly, a man. He was on £38k more than Holder, despite having just a couple more years of experience. Armed with that knowledge, Holder asked for a pay rise and got one.

"Secrecy keeps pay gaps intact. It puts power in the hands of the employer and it breeds feelings of shame," Holder writes in her new book, Open Up: The Power of Talking About Money. "Public conversation, the kind that makes newspaper headlines, is needed – it changes society and challenges perceptions."

To talk candidly of money is seen as very un-British, yet Holder believes that broaching this awkward subject is necessary not only in general public discourse but also on a personal level. Opening up about money has certainly helped her own career as she left adland to become a writer and consultant. But, on a bigger scale, that kind of radical approach could also transform the whole advertising environment.

Holder spent 12 years at agencies including Wieden & Kennedy, Mother and Anomaly London, where she was a partner and executive creative director between 2013 and 2016. During that period in the industry, she recalls: "I wasn’t treating money with any respect. It was just something I earned and I always thought it would be there. I didn't value my time either – I was working a lot. It got to a point where I didn’t want one agency to completely own me and my time."

She says she observed that unbalanced attitude towards money and work among her peers as well. In her job, she began to feel "I was feeding a consuming cycle that I don’t totally stand behind. I’m definitely not on a moral high ground, but I can’t believe how much I really cared and fought for it. I realised I did my best work when it’s something I ultimately care about."

A more mindful relationship with money

After leaving Anomaly, Holder set out to become a freelance writer – a job that halved her salary. That decision forced her to build healthier financial habits, and the book she has written since is in many ways a result of that process. It is not a manual for getting rich, but rather a guide to having a more mindful relationship with money and consumption.

"Now that I’ve started talking about money, it’s less of a thing and I feel more in control of it," she says. Just as open conversations have helped break down taboos around mental health and sex, Holder believes transparency could be the first step in tackling bigger money issues such as the gender pay gap and economic inequality.

The ad industry has a money problem: it lacks a formal wage structure and this leads to "massive pay disparity", Holder explains. Her former colleague Ben Key summed it up to her as such: "In the first half of your career you’re underpaid, and in the second half you're overpaid."

Agencies need "a balancing out across the board", with more transparency and a formal pay structure, Holder argues. This would curb problems such as people getting false job offers in order to pressure their employers into giving them more money. "That’s not helpful for anybody and doesn’t foster a relationship of trust," she says. "It also bleeds talent if the only way to get pay rises is to go to another agency."

The uglier side to this lack of transparency is a problem that has finally come under the spotlight: the gender pay gap. Last year, WPP reported a median pay gap of 14.6% between men and women; the worst agency was J Walter Thompson, which had a gap of 44.7% in favour of men.

"After the pay gap audit and results were revealed, there can’t be a woman in London who isn’t sat there looking at her male colleague thinking: are you earning more than me and I have no idea? That creates a distrustful environment and the only person it benefits is the employer," Holder says. "The people at the brunt of inequality are usually women and minorities. Generally, it’s white men who benefit exponentially from that because more white men are leading agencies." 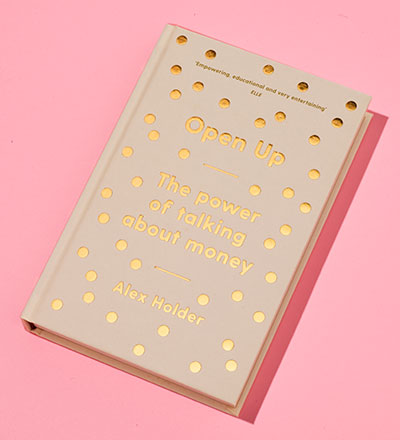 The industry’s disparity came into harsh focus for Holder when she saw that notepad in her agency, but it made her realise: "To get a pay rise in advertising, you’ve actually got to go and ask for it. No-one’s going to come to you and crown you with a pay rise."

Many people struggle with how to negotiate pay rises, and that is why Holder advises talking more about money on a personal level first: "Ultimately, if you can't talk to your friends about money, then you’re not going to be able to negotiate a pay rise.

"I’m not saying turn around to the person next to you and say: this is what I earn, what do you earn? Treat it like a conversation about mental health or sex – in places you feel safe with people you trust. If you can get good at talking about money with people you love and trust, maybe when you’re next in a pay rise conversation or in a situation where you don’t feel comfortable, you will feel empowered and you’ll have the confidence to talk about it."

Shedding taboos about money has also helped Holder navigate the world of freelancing, a career path that is becoming increasingly attractive to a new generation of creative talent. After talking candidly with other freelancers and industry figures, she says she saw an "immediate benefit" to her job by being able to negotiate fair rates.

Holder believes that taking control of money will become a new wellness trend, because better financial health can help lessen anxiety. If she is right, then brands may have even more of an imperative to change their advertising messages about consumption.

"Brands have a responsibility to help us all consume better – making sure people are buying things that will actually fulfill them, rather than something they’re going to use once and throw away, can’t afford and are ultimately not good for them," Holder says. "Having more honest conversations about what we’re doing and why, and being aware of what we’re selling, will only benefit our industry and brands."

Now, Holder sees clearly how opening up about money could have changed so many facets of her life, from her creative work to relationships. "There are light-bulb moments waiting for you if you have the conversation," she explains. "We saw the pay gap at work, and inequality in this country is getting worse. Protecting that awkwardness and shame around money is not helping anyone."

Mary Portas: How 'working like a woman' will transform creative businesses

From desk jobs to side-hustles: How one creative entrepreneur smashed the career ladder and designed a new way of working