This year, we will honor executives across all areas of advertising and marketing.

Campaign US has opened its annual 40 Over 40 Awards for nominations, but this year, we’re dropping the "digital" element to make the celebration more inclusive.

A panel consisting of the Campaign US editorial team as well as a jury of decorated industry leaders will judge nominations. Jury members will be revealed in the coming weeks.

The Campaign US 40 Over 40 Awards will honor executives for their noteworthy contributions across advertising, marketing, media, technology and communications – from groundbreaking creative work and head-turning innovations to outside-of-the-box thinking and award-winning campaigns.

"While we love celebrating rising stars, we can’t forget about the professionals who paved the way for those entering the industry. In the past, Campaign US’ 40 Over 40 was dedicated to digital professionals, but we’ve now opened it up to laud the most talented and accomplished individuals transforming all of adland," said Campaign US Editor Lindsay Stein.

The deadline for entries is June 19, with winners being revealed in August. 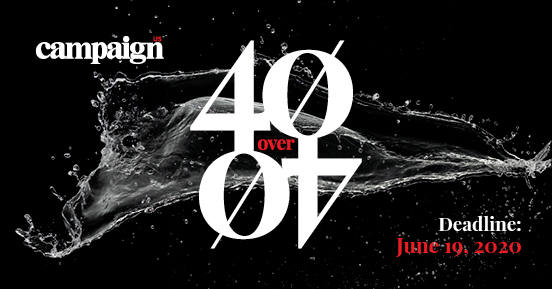