The perfect marriage of behavioral science and creativity.

It’s not so common in America -- land of the free and home of the rare public urination sighting. But over in Europe, people have grown fond of taking a slash in just about any outside environment.

One extreme victim is Paris. Train stations in particular are a pee-zone of choice. Although illegal, the act is multiplying and the cleanup is expensive.

SNCF, France’s biggest locomotive company, hired Ogilvy to do something about La Gare des Mureaux, which experienced one of the worst cases across the network.

"The corners of walls inside and outside of La Gare des Mureaux had become official urinals that passersby and station workers had resigned to live with," said Catherine Deslisle, head of the SNCF Transilien Nudge Unit.

Her team turned to the strategic and creative minds of Ogilvy Paris (specifically the agency's consulting practice of behavioral science), and together they created an intervention called "Stade des Mureaux."

The station was transformed into a sports stadium, home to an athletics track outside complete with spectators and stop-clock and large bubble stickers in the corner of walls representing life-size athletes playing with exaggerated 3D balls. 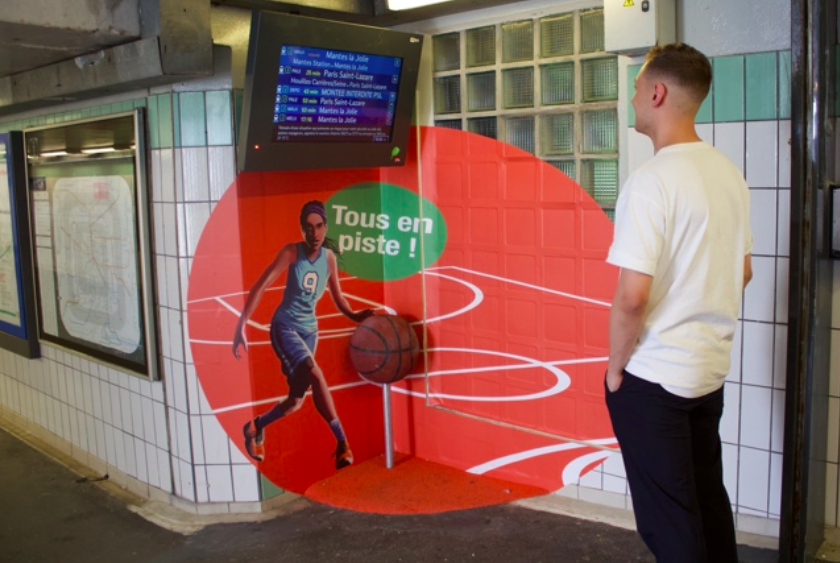 Nicolas Fieulaine, Researcher in Social Psychology of NF Etudes, explained: "When we do not give a particular purpose to a place, we let people decide for themselves how to use it. For example, to make it a place to relieve themselves. In this instance, some walls became ‘accepted’ urinals and it becomes difficult or impossible to change the behaviour unless we give a new role to the place in question.

"In our case, a children’s play area is a very simple way to say to the potential offenders ‘no, this corner of the wall is not a place to urinate.’ This is called a framing effect in behavioral sciences."

The Stade des Mureaux showed an 88 percent reduction of public urination over a period of four weeks, and a total reduction on the walls outside of the station. The only residual acts took place between 1am and 6am, at times when the station is empty -- in rare instances.

In addition, the perception of the station des Mureaux by travelers improved significantly. The image of cleanliness was up 14 percent, the feeling of unpleasant odors was reduced by 34 percent and the overall experience in the station jumped 24 percent.

Benoit DeFleurian, principal and head of behavioural science practice at Ogilvy Paris, said: "The Stade des Mureaux is much more than just an effective nudge. For when behavioral science meets creativity, nudges do not just have the utility of changing behavior. They tell stories, they bring life and cheerfulness and they improve the user experience. And this is obviously a key collateral effect for SNCF."