Online supermarket and food delivery platforms are the three fastest growers in the Top 75.

With people having periodically faced severe restrictions this year on their ability to go out for dinner or even visit the supermarket, there was a clear opportunity for businesses offering to take those things to people’s homes. So it is not surprising to see three such brands named as the fastest growing in the UK, in the Kantar and WPP’s Most Valuable UK Brands report.

Ocado, which earlier this month switched its supply deal from Waitrose & Partners to Marks & Spencer, tops the list, growing its brand value 63% to $3.3bn (£2.7bn), taking it to 18th place in the overall ranking.

Deliveroo (ranked 29th) is the next fastest, with a value up 40% to $1.9bn. The restaurant delivery platform was also the fastest grower in last year’s ranking. Just behind it this year is competitor Just Eat (ranked 20th), which grew its brand value 19% to $2.8bn.

But at the top of the list, during 2020 the UK’s most valuable brands have shed value, with all but four of the top 20 in decline. There is no change in the order of the top five brands, led by Vodafone – comfortably top of the list with a value of $23.1bn – followed by HSBC, Shell, BP and BT. The values of these five corporate giants have fallen by between 13% (Vodafone) and 24% (BT), according to BrandZ. 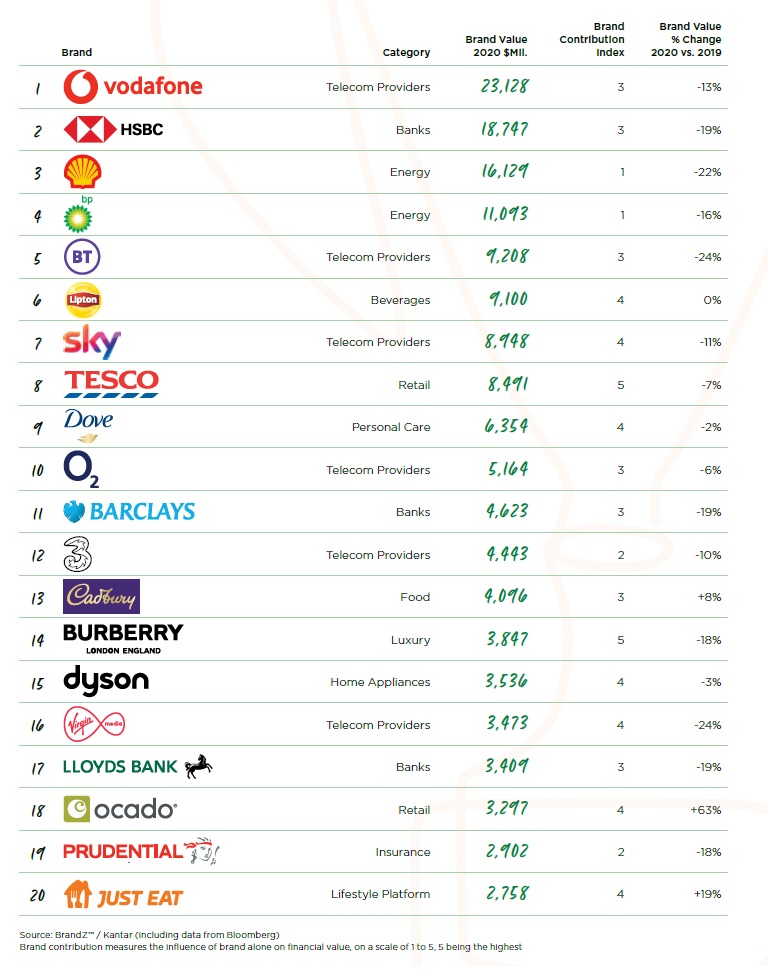 Overall, the collective value of the top 75 brands decreased 13% – a worse outcome than the global top 100 ranking published in June – but they have still outperformed the brands within the FTSE 100 by 5%, BrandZ said.

Jane Bloomfield, chief growth officer at Kantar UK, said: “Many of our UK Top 75 continue to trade on size and stature, which is a precarious position in a highly competitive global landscape. A lack of innovation and differentiation leaves them exposed as household budgets fall and consumers re-evaluate brand choices, often permanently switching to new brands they have found during the pandemic.

“This is a ‘do’ moment for brands and positive action is needed to ensure survival. No brand is too big or too well known to fail in the current climate. Understanding the drivers of brand growth and acting on them quickly is business critical.”

Unilever, Tesco, Mastercard and more on why CMOs need to invest in advertising

Brand recovery in a post-pandemic world

Amazon overtakes Google and Apple as world's most valuable brand