At some point, Oatly will face the challenge of how to hang in there as a brand when the 'free-from' category no longer has the same centrality in consumers' minds

Some brand categories are era-defining. They just force their way to the front of culture for a while and become not just something to consume but something to talk about in the pub, somewhere you’d love to work, and some trivial but evocative part of your life story.

For me, it all started with lager, as things often did back then. It once seemed OK to do almost anything as long as you did it in an Australian accent, thanks first to Foster’s and then to its disarmingly unsophisticated cousin, Castlemaine XXXX. But this didn’t last forever. Lager became gradually less front and centre, apart from its anti-heroic cameo in an Underworld track made famous by Trainspotting.

Next up was denim. Before Levi’s, brand owners were scared of retro. I almost got thrown from a high floor onto the mean streets of Mayfair for suggesting it as a possible roll-the-dice strategy for a terminally declining brand of boxed chocolates. But Levi’s turned it into a weapon of mass attraction, and suddenly everyone (well me anyway) was buying not only 501s, but white vests and Sam Cooke records. After a while, Diesel’s mad quirkiness kept the category’s influence going.

Over the years a succession of other categories have gratefully seized their 15 minutes, or slightly longer, of fame. After denim, came sports brands. Nike was both rebel and leader, finding its own voice in football and effortlessly uniting sport and popular culture. But by the turn of the millennium, sports brands were giving up some of their centrality to products powered not by sweat but electricity.

Nike’s global advertising director Geoffrey Frost joined Motorola, reassured by one of his agency team telling him that "cell phones are the new trainers". In the UK, brands like Vodafone, Orange and O2 radiated energy. Then mobile brands gave way to tech ones – Apple and Google, and tech gave way to social.

This raises some questions. First, what is the era-defining category in 2020? Is there one? I discussed this with some colleagues recently in one of those breaks between people apologising for being late on the call, and people apologising for needing to get on another call. Their view, advocated frivolously at first but with increasing conviction, was that the category was "anything vegan". I wasn’t quite sure about this until one name exploded into my not yet Covid-fogged brain: Oatly. If vegan is a category, then Oatly is its poster child.

Part of the answer is to have an effortlessly distinctive personality, to go "over here" when everyone else is "over there", to give the impression that you don’t really care if anyone joins you because you’re having a lot of fun anyway, thanks very much. It’s a difficult trick to pull off but an irresistible brand personality can be not just a sales driver, but the grit of distinctiveness in in a successful corporate oyster. 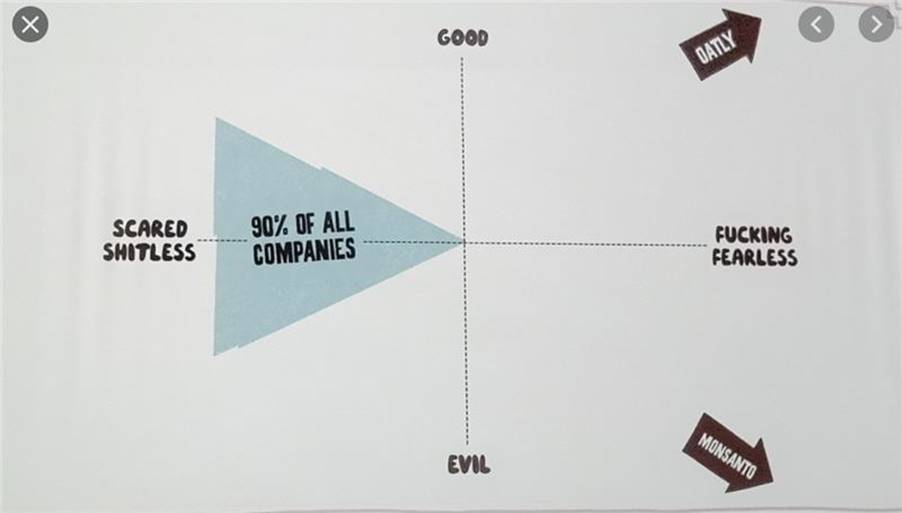 One example of this is the Oatly business strategy, which has achieved levels of fame and notoriety not commonly attained by a strategy chart (above). I’m prepared to bet that for a certain type of talent, just seeing this personality-rich one-pager has significantly increased their propensity to apply for open positions at the company.

Lastly, and the toughest question, is how to hang in there as a brand when the category no longer has some of its centrality in people’s minds. One of the reasons Apple and Nike are such stalwarts of the conference circuit is that they seem to have cracked that code, while many of the other brands mentioned above have stayed static or even virtually disappeared.

There are enough potential reasons for that to occupy a book, rather than a short article, but here’s one thought. Those brands have maintained their sense of self to a striking degree. They’ve never given the impression that their success leads them to play it safe or pander to their massive audiences. But that doesn't simply mean being crazy rebels and never changing. Brands nowadays don’t get much of an adolescence and today’s rebel is tomorrow’s carefully scrutinised corporate entity.

Even crazy quirky little Oatly got a lot of flak for selling a stake to Blackstone. Making the transition from precociously outspoken child to responsibly charismatic adult is never easy. But even if it has it be achieved faster than ever before, it’s the secret of outlasting your era.

John Shaw is chief strategy and innovation officer at Superunion

Vegan brands must move beyond a self-limiting strategy