Trump's presidential win is reenergizing the newsroom, said the executive editor at SXSW.

President Donald Trump has publically condemned a lot of brands, but the New York Times has been an especially frequent target. The newspaper even has a running list of all the times Trump has tweeted about its "failing reputation" and "fake" coverage.

However, as much as Trump would like to see the newspaper and other news organizations like it lose its readership, NYT’s Executive Editor Dean Baquet said the paper will be there to cover Trump’s moves every step of the way "without fear or flight."

If anything, Trump’s win is spurring a momentous new age in journalism, according to Baquet.

"We are preparing for the story of the generation," Baquet told NYT media columnist Jim Rutenberg during a discussion at SXSW on Sunday. With a president riveting the nation with his antics and the economic realities that are forcing their way in, he said, "the next two years will be an historic moment in the life of news organizations. Twenty books will be written about American journalism."

During a session called "Covering POTUS: A Conversation with the Failing NYT," Baquet said Trump’s win has rejuvenated the paper’s mission of being an honorable searcher of truth. Reading the newspaper was a necessity from the '30s to the '80s, he said, but the rise of the internet has given people more options to get their news. The organization had been undergoing an identity crisis about where it fit in, said Baquet. Then Trump won the presidency.

"The night of the election," said Baquet, "when I was wandering around the newsroom after I first realized we were all in shock because he won, I just levitated because I thought, it’s so clear what my life is going to be like in the next two or three years."

With an audience yearning for Trump news, the New York Times hired more investigative staff members and saw "hundreds of thousands of people sign up for digital subscriptions" after the election, said Baquet. 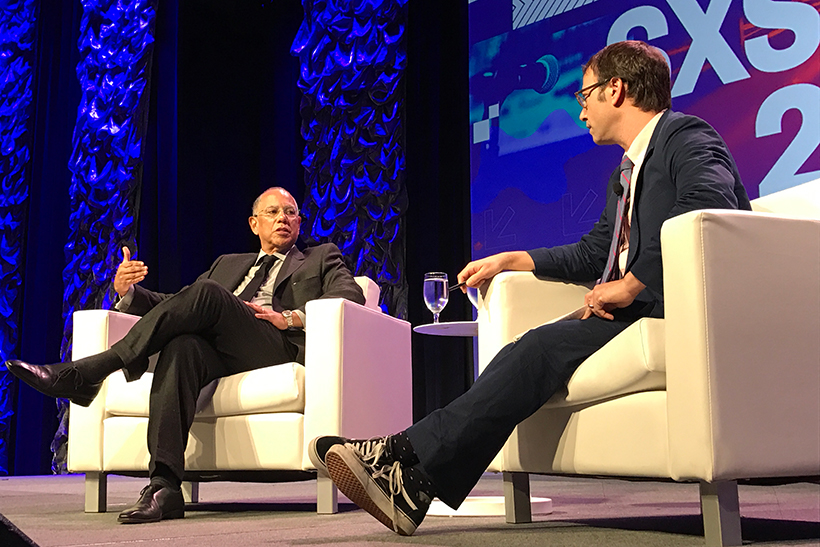 Still, like other newspapers, there is still an element of uncertainty in its future. Baquet addressed the paper’s struggles with lost advertising revenue and maintaining its reputation as a truthseeker, even as layoffs are pending.

"I have to figure out how to manage a changing economic reality of newspapers," he said. "The harsh reality of the newspaper business is that advertising, which has sustained us for a long time, is disappearing ... The New York Times will be a little smaller, but emphasis on a little bit. We will do nothing to cut our ability to cover this presidency in Washington."

As part of an effort to counter Trump's "fake news" claims, the New York Times recently introduced an ad campaign declaring "The Truth is Hard," during this year’s Oscars. The ad is one way the paper hopes to boost its sales by reflecting the brand’s mission back to the public who might be misled by Trump’s comments, said Baquet.

"I think we took for granted that people knew what we did and they don’t. And we have to fight to make sure they do," he said. "One thing we started to do is to be transparent and let people know what it takes to get a story.

"It’s about creating a long-term view that what we do is different. We spend the money and we risk our lives to cover war," he said. "I refuse to believe that people will not understand that what we do is not fake news, that it is hard-fought, hard-won coverage."

Engage or walk away? Brands' dilemma after a Trump Twitter attack