SRI LANKA — Two major newspapers here made a simple but powerful gesture to honour the country's elders, with some agency help.

Like many Asian countries, Sri Lankan culture reveres and respects the contributions of elder citizens. Yet with today’s fast-paced lifestyle, many elders feel neglected and alone, with the younger generation hardly seeming to have any time for them. TBWA Sri Lanka and PHD Sri Lanka joined forces to find a way to re-ignite that feeling towards elders in a tangible manner that would have a direct impact on their lives.

PHD and TBWA convinced the Mawbima Group of Newspapers, the publishers of the Mawbima (Sinhala) and Ceylon Today (English) daily newspapers to increase the font size of their two publications from the normal 10 points to 17 points on the International Day of Elders (Sept. 28). The newspapers boast readership of approximately 704,000 and 83,000, respectively.

This effort received coverage from a host of local radio and TV stations including all four morning television chat shows, three of the five leading FM radio morning shows and the two major evening news programs.

The initiative was extended to involve the general public by having them join in this tribute on social media (Facebook) through the physical adoption of the campaign mnemonic as their profile picture. 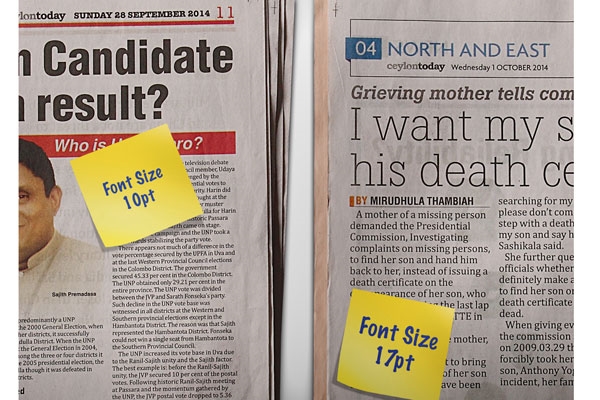 Mawbima and Ceylon Today increased their print runs by 25 percent and 35 percent, respectively on the day, and both reported selling out completely. Both also received numberous calls and letters, from both the general public as well as from key opinion leaders, commending the initiative as a thoughtful gesture.

"In all my 25-plus years in media, I have never seen editors get excited over an agency concept," said Keith Wijesuriya, CEO of PHD Sri Lanka. "And certainly not one that brought no revenue as a commercial deal."