Ad broke rules because it featured Harry Winks and Davinson Sanchez, who are under 25. 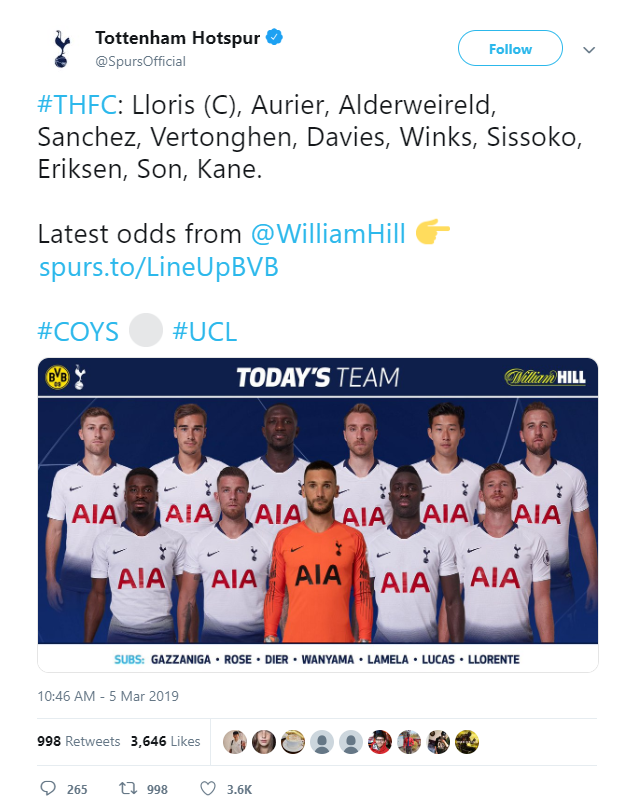 The Advertising Standards Authority has ruled against Tottenham Hotspur and William Hill for a joint tweet posted ahead of Spurs’ match against Borussia Dortmund in the Champions League on 5 March.

Rather than acting on complaints, the ASA itself chose to investigate whether the tweet was irresponsible and breached the CAP Code because it featured Harry Winks and Davinson Sanchez, players who were both under 25 years of age.

The tweet featured Tottenham’s full starting line-up for that day’s match, with a link through to a page featuring betting odds from William Hill.

According to the CAP Code, no-one under 25 can feature in marketing communications for a gambling brand, except in very specific circumstances.

Any ad featuring a person below that age must be in a place where a bet could be placed directly through a transactional facility, such as a gambling operator’s own website. The individual featured must also be the subject of the bet being offered and the image must only show them in the context of the bet (eg playing football) and not in a gambling context.

The ASA ruled that the ad did not meet either of those requirements and ordered it not to be used again in the current form.

Have the ASA's gender rules gone too far?

Can the Champions League rival the Super Bowl for brands?

Is your brand as smart as a seven-year-old?