The New York Time’s Chief Operating Officer has revealed the ‘stunning moment of defeat’ that served as the turning point for her career.

Describing the "pivotal" moment when she was passed over for a job she’d been working toward for a decade, she explained: "When this job that I’d been moving up the ladder for became available, it was not obvious to the new CEO of that company that I should be the person for that job, and it was a stunning moment of defeat in my career.

"When I’d probed about why I was not an obvious choice, he essentially said, ‘It just strikes me that you’re smart enough to know what to do, but didn’t stand up and tell everybody.’ It was the turning point in my career."

Kopit Levien left that company by choice, and vowed she’d only leave her next job "in a body bag."

"I will never again play not to lose -- I had to learn how to be someone who played to win -- everything else was different after that."

The COO, who’s been with the company for around five years, said there was a period of time in which she was the only women on the executive committee. But three other female execs joined rapidly – a transition she said empowered her in her role. 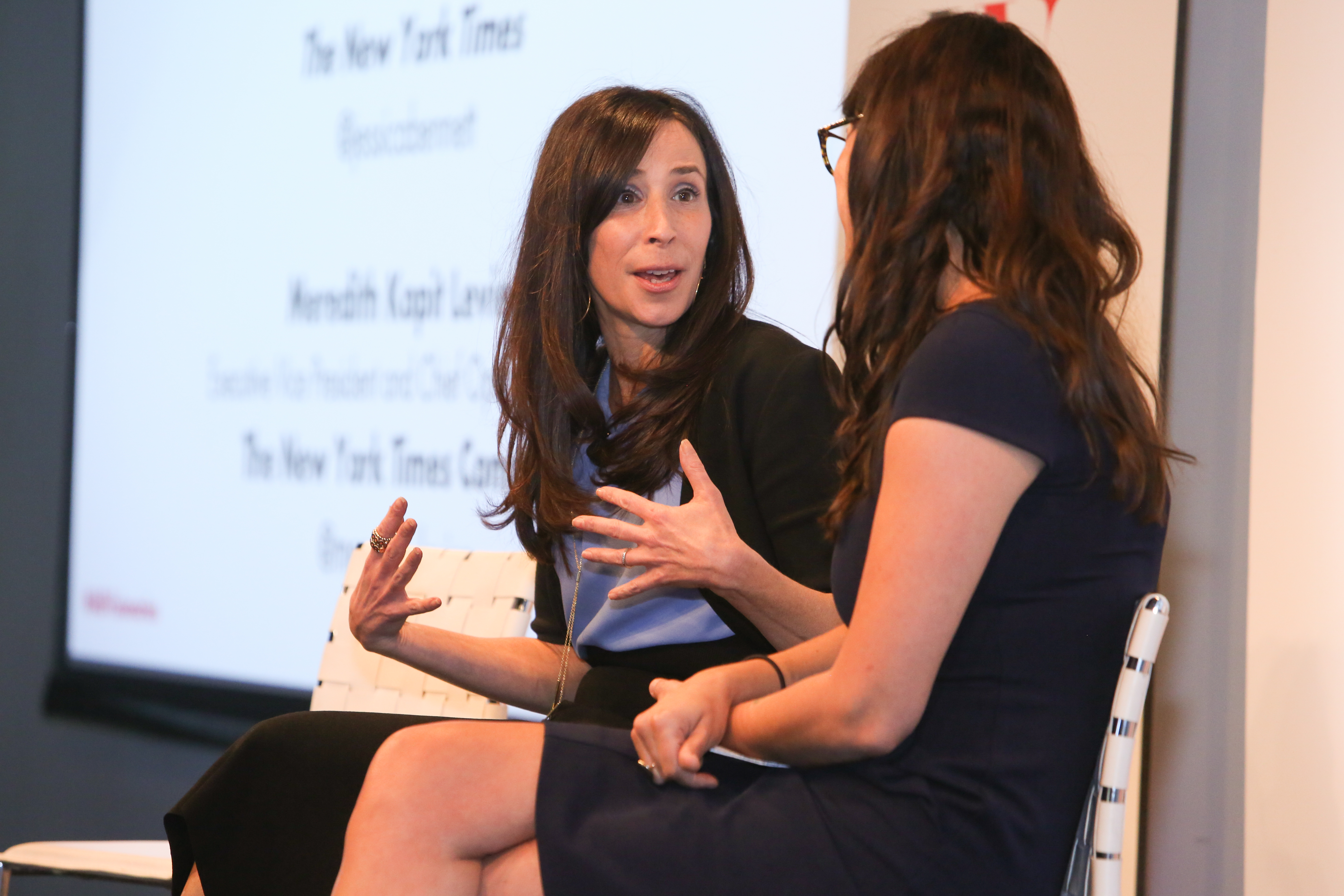 "It’s so clear to me that when there are more women in the room, I perform better," she added. "It’s because I’m not so worried about the atmospherics or trying to fit into a system that I didn’t design."

Kopit Levien shared the stage with Jessica Bennett, the New York Times’ first gender editor. Bennett, who joined the team around two weeks after the Harvey Weinstein story broke, spoke about what direction the equality conversation must go in now.

The editor said mass thumb-twiddling followed the Weinstein story, as newsrooms waited for the next high-profile public figure to fall.

"It was a tsunami, this domino effect, one after the next after the next," said Bennett. "Then it felt like there was a little bit of a lull. And being the skeptical journalist who has written about gender issues for a long time, I started looking at my clock wondering when people were going to get tired of this story line, and they have not.

"What we’re seeing is a shift from very high-profile cases with very well-off, privileged woman – who in many cases were more famous than the accusers -- expand into looking more critically into working class industries and looking at the role of race in this conversation. Now we’re really gearing toward looking at solutions. If the legal system hasn’t been able to keep up, then what mechanisms are in place to prevent this from happening in the future?"

The New York Times will bolster its gender coverage with deep-dives into topics like masculinity and what boys are being taught about what it means to be a man. The organization recently won praise for Overlooked – an editorial initiative in with obituaries were written for deserving women who never got them.

Bennett explained that as newsrooms become more diverse in nature, so too will the coverage.

"Media was traditionally created for and by white men, that’s the reality and it’s okay for us to acknowledge that," she added. "As we see newsrooms shifting -- more women in leadership roles, more people of color -- we’re also seeing coverage shift. These things are so intertwined."

Revealed: How to market 'togetherness' in broken America

Age doesn't matter - it's all about storytelling in advertising

Are we there yet? Saatchi & Saatchi's Andrea Diquez has her say