Aldi and Lidl are in second and third place respectively.

Netflix has bumped Aldi off the top spot on the BrandIndex, a YouGov barometer that ranks brands on their "buzz" – a position that Aldi has occupied for the past five years.

It is the first time that the video-streaming platform is number one, after it entered the rankings in 2016.

The scores are calculated by asking respondents if they have heard anything positive or negative about a brand in the past two weeks. The survey took place at regular intervals between 1 January and 31 December 2019.

Netflix’s score has increased by 0.5 year on year – something that YouGov said is down to "a host of Oscar-nominated, big-budget original film and TV series releases".

Aldi took second place and Lidl has re-entered the top three in third place, after coming fourth last year, with a score increase of 1.1 and 1.3 respectively. 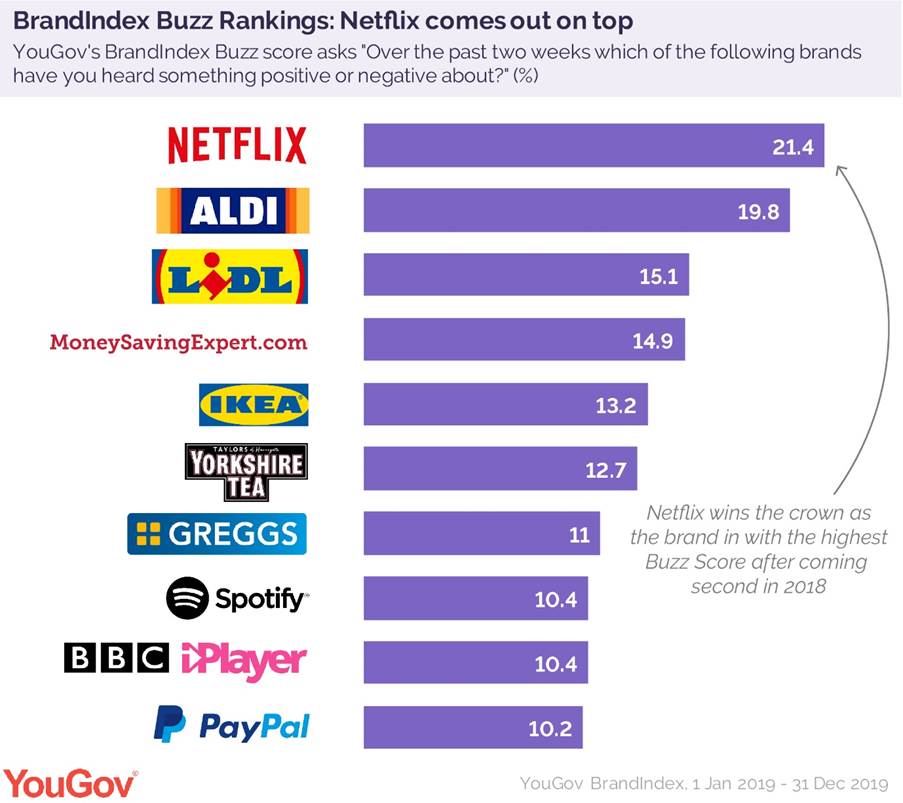 Greggs and Spotify are new entrants in the top 10. YouGov noted that Gregg "saw the effects of their vegan sausage roll".

Amelia Brophy, head of UK data products at YouGov, said: "For the first time since 2014, Aldi does not place top in YouGov’s annual buzz rankings, being pipped to the gold medal by Netflix. Netflix only entered into the rankings in 2016 and has done well to be highly perceived by the public in such a short amount of time.

"2019 saw Netflix focus on developing and launching original content that caters for multiple markets and demographic groups, which appears to have been successful rewarding them with multiple award nominations, including the Oscars, and ensuring that the brand was talked about positively more than ever before."

MoneySavingExpert tops ranking of brands most recommended by own users

BBC at risk of losing generation of potential licence-fee payers