Netflix is the brand with the second-most-positive net perception among UK consumers, according to YouGov's BrandIndex Buzz Rankings for 2018.

Aldi kept the top spot with a score of 18.7, up from 18.1 in 2017. It was the first time in five years that any brand other than Aldi and Lidl had occupied the top two positions.

Netflix only entered the top 10 for the first time in 2016, when it ranked sixth, climbing to third last year.

MoneySavingExpert.com leapfrogged both Lidl and BBC iPlayer, climbing this year's rankings by two places to third and improving its score from 12.6 to 14.0. BBC iPlayer fell from fourth to sixth, scoring 11.8, down from 13.2 last year.

Amelia Brophy, head of data products at YouGov UK, said: "For the first time in five years, we have a new brand, Netflix, in our top two BrandIndex Rankings, which is impressive for a company that only entered the top 10 in 2016. The BBC have also performed well this past year, with both channel one and iPlayer inside the top 10.

"However, it’s the most improved brands which are most interesting. With all four top positions being inhabited by transport companies, it’s clear that brands have had to make great improvements – particularly in a year of relatively bad press among cancellations, strikes and increased costs across the entire transport industry."

YouGov also revealed the 10 brands with the greatest improvement in their buzz score, and it was dominated by transport brands that have faced reputational challenges, with British Airways (up 6.6 points), railway brand Southern (6.5), Uber (5.9) and United Airlines (5.0) making up the top four. 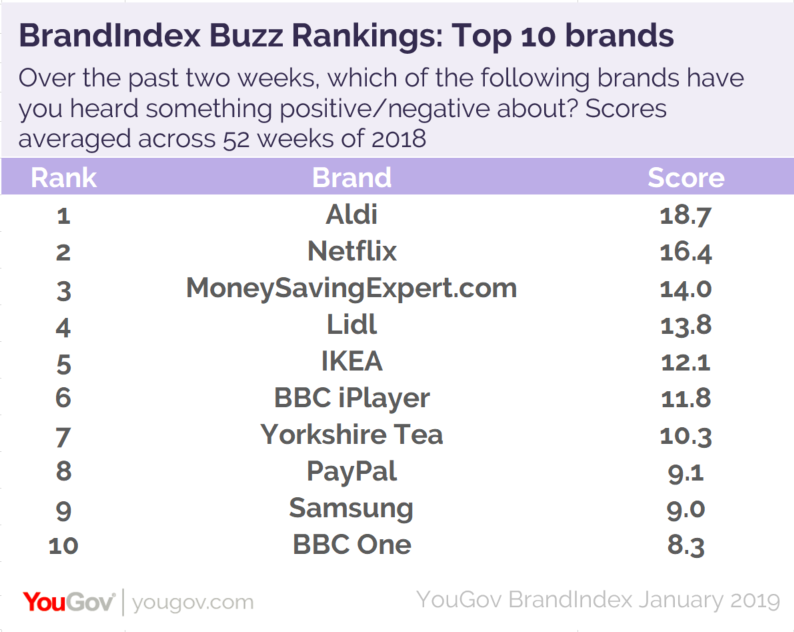 MoneySavingExpert tops ranking of brands most recommended by own users