Lloyds Bank won Channel 4's Diversity in Advertising Award for a campaign about mental health. But the bank believes the effort to break down taboos is only just beginning.

When public figures from Prince Harry to Lady Gaga and Stormzy are opening up about their mental health, it is clear the Royals were right when they said last year that "attitudes to mental health are at a tipping point."

Nearly a year after the Royal Family’s groundbreaking mental health campaign for the charity Heads Together, that tipping point has finally reached mainstream advertising. Earlier this month Lloyds Bank launched ads in which celebrities, bank employees and members of the public play a "Who am I?" sticky-note guessing game to talk about mental health conditions such as anxiety, bipolar disorder and depression.

The campaign by Adam & Eve/DDB won Channel 4’s second Diversity in Advertising Award, which gave £1m in free airtime to the best creative idea focused on non-visible disability. The brands entering this year’s competition faced an even tougher brief than the first time around, but Lloyds took on the challenge to address issues that it had come to realise were affecting its own customers and staff.

"You can avoid doing anything for worry that it might come across as negative," said Ros King, marketing communications director at Lloyds Banking Group. "In the end it’s important to get people talking about mental health, just the way we talk about cancer. To not talk about it would be a real shame because people wouldn’t benefit."

Lloyds was among nearly 100 entries to the first Channel 4 diversity contest in 2016, called Superhumans Wanted, but that award went to Mars brand Maltesers and its agency Abbott Mead Vickers BBDO. With the brief to feature disability in advertising, Maltesers won for spots depicting disabled people in everyday awkward situations, such as having sex with a new partner.

The competition had come about because Channel 4 wanted to make it less risky for marketers to improve diversity, the broadcaster’s head of sales Matt Salmon said. "We were blown away by how engaged advertisers and their agencies were in Superhumans Wanted," he recalled, but this year Channel 4 took it a step further by challenging entrants to come up with ideas about non-visible disability.

"We were very nervous about doing that because TV is all about vision and sound. To set an advertising brief about something non-visible was a fairly ambitious strategy," Salmon said. "But after the fantastic reception that Mars got, it gave us the confidence to challenge brands again."

This time the competition received 53 entries. And it faced an unexpected snafu: after Channel 4 awarded the prize to Volvo and Grey London in July, the car company pulled out three months later, claiming the winning idea had not been shared with the brand or approved for production.

Lloyds and Adam & Eve/DDB, who had been highly commended, won the award instead. While many of the entries focused on mental health, Salmon said the judges liked the bank’s pitch because it "allowed them to showcase a whole range of different mental health conditions."

As a late winner Lloyds, the agency and Channel 4 faced a tighter time crunch, a challenge that was compounded because the script included celebrities, many of whom were less accessible during the Christmas holiday period.

"We had to work more closely with Lloyds, Adam & Eve/DDB and the media agency [Greenhouse] than we had in the past," Salmon said. "But the result of that collaboration is a much more integrated campaign."

The campaign was timed to launch on Time To Talk Day, a national day aimed at breaking the silence around mental health issues. It included a more robust social media strategy than last year’s winner, with celebrities such as Professor Green making 30-second pledges to #GetTheInsideOut.

To meet the challenge of representing a non-visible disability in a visual medium, Adam & Eve/DDB creative directors James Gillham and Graham Cappi came up with the idea of the sticky-note guessing game.

"When we began chatting we realised we were both quite ignorant about mental health, but we knew the most important thing was to start asking questions, even though they might be wrong, to start the conversation," Gillham and Cappi said via email. "The other thing we were conscious of was not to be too sombre. That’s how we got to a game."

Besides the celebrities, a striking part of the ad is that it features real Lloyds employees talking about their actual mental health conditions. The range of people in the ad "brings home the fact that this affects everybody," King said.

That truth had already been acknowledged by the brand, which has partnered with Mental Health UK for the past two years, raising over £4.8m for the charity and helping them launch a money advice service for people with mental health issues. The bank has also provided training for 30,000 of its employees to better understand mental health.

"This felt authentic," Salmon said of the Lloyds ads. "Just like with Mars, this was a natural extension of what the brand was already doing." 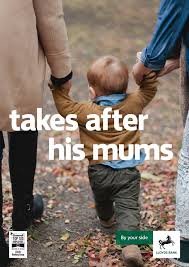 Now as the bank begins to tackle conversations about mental health, research backs up its efforts. One in four people in the UK are affected by mental health issues, and 75% people believe there is still a stigma attached to that, according to a survey conducted by YouGov. Yet 72% of the survey respondents said society has a better understanding of mental health compared to five years ago, and that has been helped by more media coverage and openness from public figures.

Lloyds knows the conversation is just beginning. This campaign will continue to run on other channels after its free airtime has run out, King said.

"I hope this will encourage viewers to talk to their families and friends about how they feel," Salmon said. "If this makes one person go and have that conversation and start thinking about their mental wellbeing, then we’ve achieved something."

Google's Nishma Robb: for 20 years I felt I was going to be found out