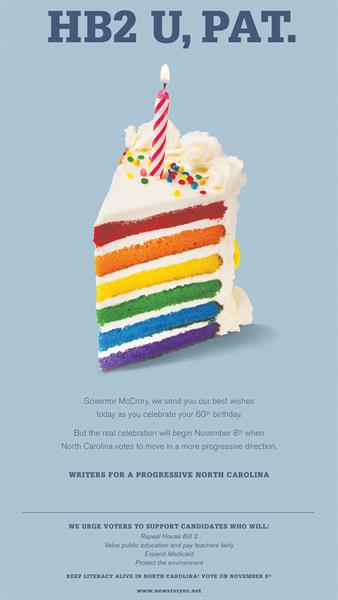 North Carolina’s anti-LGBT HB2 "bathroom bill" was signed into law by Republican Governor Pat McCrory in March 2016, a move that initiated calls for boycotts of the state and strong opposition from local progressives. To "celebrate" McCrory’s 60th birthday today, a group of NC authors and songwriters ran a full-page ad in the Raleigh News & Observer calling for voters to replace him come Election Day. The ad is the first work for the nonprofit Writers for a Progressive North Carolina from Charlotte creative agency BooneOakley. In addition to the newspaper ad, the campaign is running as a banner ad on local new sites, as well as via paid Facebook placements and on social media.

Streaming service Topic wants to be your new quarantine hobby

McKinney gets creative in fight against N.C.'s anti-LGBT bill