Linda Yaccarino speaks with Campaign US about shifting from a pure-play TV company into a technology company, competing with tech giants for data and talent, and the evolution of video measurement.

Upfronts season is approaching, and major TV networks are getting ready to preview their upcoming slates to secure ad spend ahead of broadcast.

But behind the glitz and glamor, the sales pitch is changing.  NBCUniversal, for one, will highlight its hybrid content and technology capabilities this year, which enable brands to buy premium ad slots “anywhere and everywhere” — not just during prime time.

“Gone are the olden days of an upfront where people who would come to Radio City would hear about only NBC prime time. When you walk in those doors [on May 16], you are going to hear about everywhere and every way that the content of NBCUniversal reaches customers,” Linda Yaccarino, chairman of global advertising and partnerships at NBCUniversal, told Campaign US.

Comcast’s media and entertainment conglomerate has been building up to this shift over the past few years, embracing new ways to distribute content online and deviating from the linear schedule to offer viewers greater flexibility to watch content when and where they want. For example, viewers can watch Saturday Night Live on-demand on NBCU’s streaming service Peacock, or catch clips on platforms such as YouTube and TikTok.

“The consumer does not differentiate between channels, or even time of day anymore. It's really important that we are meeting the consumers everywhere they are,” Yaccarino said.

Consumer viewing fragmentation has also led NBCU to embrace partnerships more heavily as part of its distribution strategy. Through a range of content and distribution partnerships, the media giant now claims to reach consumers on more than 300 touch points with its content each month.

As such, this year’s upfronts will celebrate what Yaccarino called the NBCU’s “total video” offering. “From broadcast to the metaverse, it's really celebrating the video that we make and distribute to offer marketers the grandest of platforms to sell their product,” she said.

To enable advertisers to tap consumers across all of its touchpoints, NBCU has focused on building its first-party data offering and taking an audience-based approach to its portfolio, creating a single point of access across its media properties. Yaccarino said NBCU now offers the same digital capabilities as search and social platforms.

“Data and first-party access is not to the exclusivity of the social platforms anymore,” she said. “Think about NBCU being a content company, but also a technology company.”

The advertising sales leader was speaking with Campaign US editor Alison Weissbrot during Campaign’s Media Awards 2022 virtual ceremony on Thursday (April 28). Yaccarino chaired the awards jury this year — catch up on all the winners here. 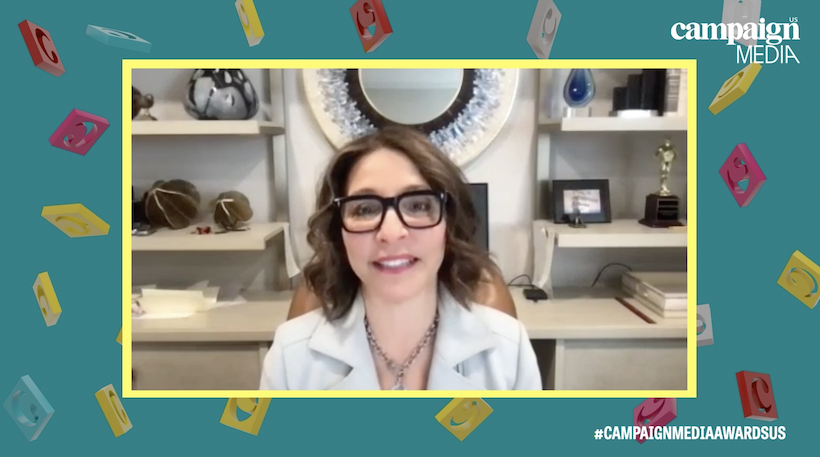 First-party data isn’t the only area in which NBCU believes it is competing aggressively with Big Tech. Where social platforms hoovered up digital talent when they were “the new shiny objects in town,” Yaccarino now believes that NBCU has a distinctive offering “in the cultural zeitgeist” that talent are searching for.

“We have Saturday Night Live, the Olympics, Sunday Night Football — things that drive cultural conversation and inform culture — and we’re bringing that together with the capabilities of data engineers, data scientists, product development folks that used to be relegated just to the tech platforms,” Yaccarino said.

Recruiting and retaining digital talent is currently one of the biggest challenges facing the media industry, which is why NBCU has diversified its recruitment efforts. One of its most-successful efforts is its veteran program, in which it has hired around 21,000 former military personnel since 2015, Yaccarino said.

Measurement remains an obstacle that is inhibiting media companies from unlocking the value of cross-platform buys. The TV industry’s dominant measurement providers are steeped in legacy systems — representative panels from Nielsen — and have been slow to adapt to the shift to online.

“If measurement is the underlying foundation of this entire industry, then the one thing it should do is to be able to measure consumption accurately, quickly and as a real reflection of consumer behavior. Unfortunately, the current state of measurement doesn't reflect that consumer behavior,” Yaccarino said.

“From a company like NBCU's position, we want to be able to appropriately measure value and monetize our content. But we're kind of like an NFL quarterback who throws for a touchdown and we only get four points instead of six points.”

This year, NBCU took a strong stance in solving the measurement challenge, and is working with partners like ISpot.tv, a firm which employs software to track the performance of ads across linear and digital TV platforms. NBCU launched a request for proposal (RFP) for a new approach to measuring audiences in August last year, shortly after TV’s long-standing measurement provider Nielsen requested the suspension of its Media Rating Council accreditation. NBCU selected ISpot.tv as a preferred provider for the 2022 Upfront season from a list of more than 100 companies that participated in the RFP.

Yaccarino said the company is “not there yet” when it comes to offering a complete view of how consumers are interacting with its content, but it is “bullish” on changing the game of measurement. “I think you're going to see the fruits of that labor coming in this upfront,” she said.

The solution will not be a single currency, Yaccarino believes. She said a multi-currency measurement ecosystem is required to unlock a complete view of the customer, in which different providers fulfill different needs — whether it's connecting TV spots to search data or to offline conversions.