Can native advertising ever be programmatic, or is automated buying and targeting at odds with carefully crafted editorial-style content?

The announcements just keep on coming. Gravity4, PubMatic, PowerLinks and Xaxis all added native programmatic capabilities to their platforms, managing to get both ad-industry Buzzwords of the Year into one announcement. The IAB recently blessed the concept with its specification for real-time bidding for native ads. And then, there's Condé Nast's Food Innovation Group, which opened a private marketplace for native programmatic ads powered by TripleLift.

But wait: can native advertising ever be programmatic, or is the idea of automated buying and targeting at odds with the whole concept of native being carefully crafted to fit in with a publisher's editorial content?

"If it's simply content amplification targeted to a specific audience, then programmatic and native can be quite compatible," says Janna Greenberg, vice president of strategy for Havas Media. "But if it's around custom branded content, where an advertiser wants to resonate with the publisher's specific audience, programmatic does not make sense."

Indeed, there's a disconnect between agencies and tech vendors when it comes to the concept of native advertising.

"The market doesn't know what it means. Some would say it's leveraging a well-known brand and associating with that brand for the purpose of sharing your point of view, similar to advertorial. Some folks think it's distributing content," says Christine Bensen, iCrossing’s head of media.

"I too have heard a lot of buzz about buying native programmatically, but I have not seen it happen at a large scale. Nor have I seen a large-scale opportunity. The majority of people who are buying programmatically are still buying reach and frequency across an audience," Bensen adds.

The IAB's Native Advertising Playbook, released in December 2013, encompasses both those things and more. It lists six native ad categories, from in-feed units like Promoted Tweets or search ads, through those ubiquitous recommendation widgets and promoted listings, all the way to "can't be contained."

Many dismiss five of those six as not really native. "As soon as you start building ad units that are called native, it's just another ad size," says Tim Waddell, director of product marketing for advertising solutions at Adobe. "The idea of being able to take creative and push it out into many places loses the feel of native in my mind."

That last "can't be contained" category is where the high-priced action is, while in-feed units is where most native programmatic plays a role.

Graham Mosley, senior director of native at PubMatic, makes a simpler distinction: "native" versus "long-form native." He says, "People that believe that native must be publisher-specific may be thinking of native in terms of "long-form native" —  advertorial or co-branded content, which by definition needs to be customized to a higher degree than the type of native ads that can be served programmatically."

Meanwhile, platforms like PubMatic are serving a menu of the other five IAB native ad categories, with content discovery services like Outbrain and Taboola getting a lot of the attention.

Combining long-form native with programmatic native can give pricey custom content a boost.

Native advertising on 100 top consumer and B2B websites increased by 24 percent in the second half of 2014, according to MediaRadar, provider of analytics for multimedia ad sales. 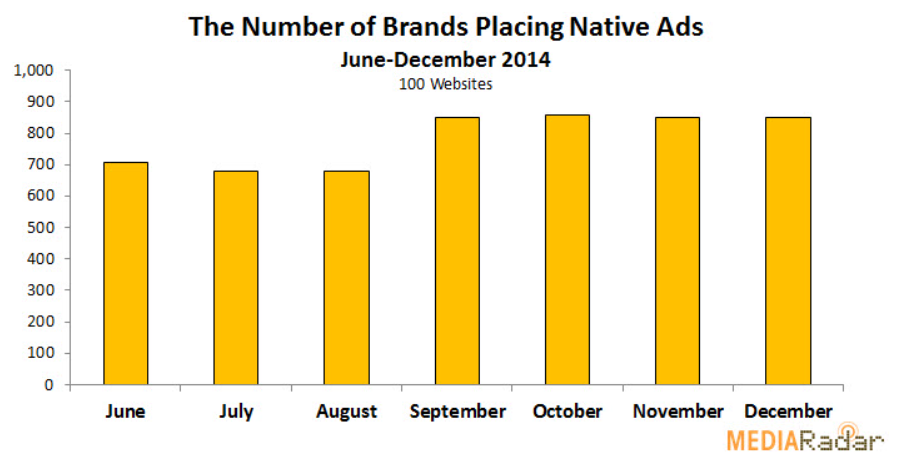 When MediaRadar talked to its publisher customers, it found that many of them are selling native as a package with display, according to Todd Krizelman, CEO of MediaRadar. An advertiser might buy a six-month run on a premium site that might include one month of native, one month of video and the balance, run-of-site display.

"Because the native advertising is sold at a much higher CPM, they'll come up with a hybrid proposal for an advertiser, where they have a blended lower rate," Krizelman says.

In fact, it's a standard practice to amplify long-form native advertising with one or more of the IAB's other five categories, especially in-feed ads and recommendation widgets.

There's plenty of room for native to grow. Of the 5,000 websites tracked by the service, only 11% carry native advertising. "They happen to be the sites everyone talks about — well-known, brand-name sites. We think that in six months, 40% to 50% of sites will have it," he says.

There are at least two barriers to the growth of long-form native advertising. First, is the ability of brands to churn out enough content. They're increasingly looking to content curation services that let them identify topics and trends of interest to a particular audience, and then find third-party content to fill the ever-hungry content maw.

"Content planning for brands is very similar to traditional news organizations and pinpointing appropriate subject matter to develop content around is essential with connecting to your audience," says Stacy Fuller, head of social innovation for Cake Group, Havas' content and social media marketing agency. Havas recently partnered with NewsCred to handle its content workflow, from finding third-party content through posting and analytics.

Another issue is finding the proper metrics for native advertising. Most native programmatic platforms measure campaigns in terms of clicks. That can lead to clickbaiting, according to Peyman Nilforoush, CEO of Inpowered. Headlines can be over-optimized to the point where they don't accurately reflect the actual content, leading to consumer disappointment and bouncing.

Nilforoush says, "This ecosystem has ballooned to where you have a lot of money going to this idea of cheap content promotion. That needs to change. There is a huge opportunity to have an ecosystem where we focus on engagement and consumers actually spending time with content.

Bensen of iCrossing thinks that publishers will be loath to give up their hold on those lucrative, can't-be-contained, custom native engagements in order to enable programmatic buying. However, as more and more publishers enter the game, prices are likely to fall anyway, Krizelman says. "Publishers are right to offer native. Many marketers are looking to try it out. But now that you have programmatic players trying to sell native, that will only depress pricing."

In brief: The touch of Apple Watch, the 'e' in trendy

In brief: Apple spends big on TV for Watch

In brief: April Fool's in the UK, Pac-Man in Google Maps

The year ahead in technology