The integrated brand campaign was led by J. Walter Thompson.

Warby Park, Zenni Optical, Ambr. The online eyewear retail market is cluttered, which is why EyeBuyDirect is looking to differentiate itself from the competition by focusing on its personality and price point in a new brand campaign.

The "It’s How You Frame It" initiative, which is running on digital and social channels, is "rooted in optical optimism," said JWT New York Chief Creative Officer Ben James.

James said the creative, which is filled with beautiful pastel pinks, blues and greens, is looking to put a "colorful personality" on the ecommerce site.

JWT created a range of Instagram videos, live-action spots and animations for the campaign. One of the live-action spots features a woman sitting with an ice cream cone that keeps getting more scoops added, and when the camera zooms out, she’s sitting on a mound of ice cream scoops. The voiceover in the spot says, "Shades for any taste, whether it’s classic vanilla or 50 shades of sorbet." 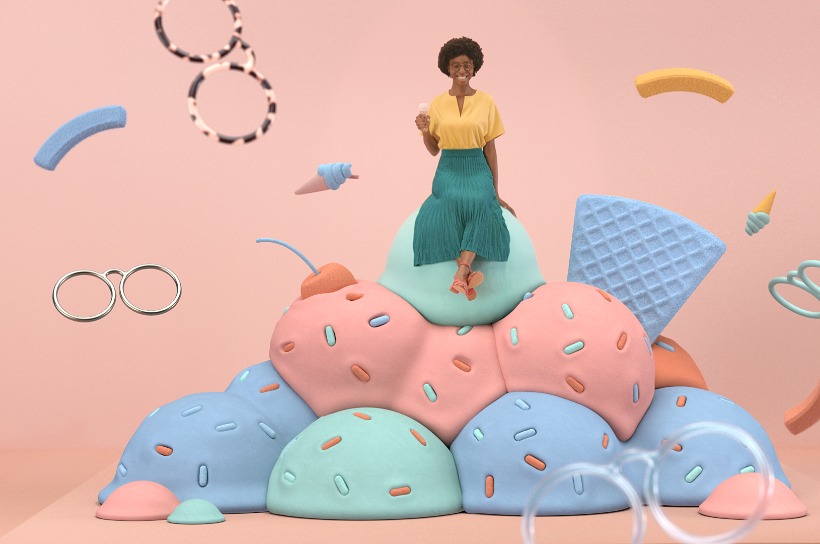 "It’s about empowering people to make the world better for themselves," said JWT New York Creative Director Karl Ackermann. "A new pair of glasses can change how the world sees you and how you see the world, and in the spots, it’s about looking at something differently."

EyeBuyDirect, which is available for purchase around the world, has been around since 2006 but has mainly focused its marketing efforts on SEO and targeting up until now.

James said the company’s price point is a big opportunity and differentiator from the competition because it allows consumers to buy more glasses.

"You can change glasses like a fashion accessory – as often as you change your shoes, and you don’t give up anything on quality," added Ackermann.

The campaign was created by "a truly global team," said James, with the client in China, JWT in New York and the production team in London. "It’s a team that’s borderless and fully connected. It was the product of many late nights and really great effort," he said.

JWT began working with EyeBuyDirect in early 2018. The next iteration of the campaign is still being determined.

How 30,000 screaming fans chimed in new era of premium content

Does A.R.'s sneaker play spell the end of brick and mortar?