UK advertising expenditure grew 3.7% year-on-year in the first half of 2017 to £10.8bn, the highest total for the first six months on record.

In the second quarter, meanwhile, the growth rate was 4%, according to the latest Advertising Association/Warc Expenditure Report. This marked the fastest quarterly growth since the fourth quarter of 2015.

Almost all digital channels recorded a notable increase in spend, with VOD up 8.8%, digital out-of-home up 29.1%, national newsbrands’ digital revenues up 15.6%, and digital radio up 22.2%.

Only magazines’ digital revenues went in the other direction, with spend down 9%.

TV spend, meanwhile, was down 4.4% across the first half of the year and down 2.5% in the second quarter.

But the grim circumstances faced by print titles continued, with a decline in total revenues, including digital, for national newsbrands (down 8.5%), regional newsbrands (15.3%) and magazines (15.2%).

Stephen Woodford, chief executive at the Advertising Association, said: "Spend on advertising is showing strong resilience, at a time of real uncertainty for UK business.

"We know advertising has a positive effect on the economy, with every pound spent generating six pounds of GDP, so it is good to see steady, sustained growth." 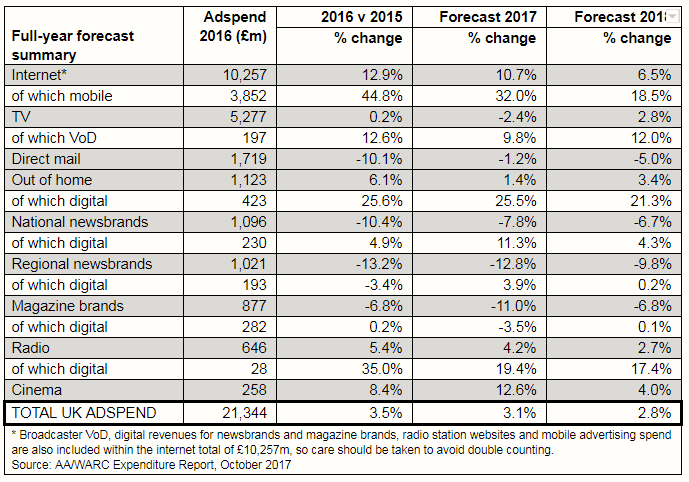 The Expenditure Report is forecasting growth to slow down somewhat in the second half of this year, with total growth of 3.1%, which would correspond to a market worth £22.01bn. This marks an increase in the growth forecast from April, when the AA/Warc set the figure at 2.5%

Woodford added: "The upgrade of our 2017 forecast by a further one percent, the equivalent of an additional investment of £190m, should be seen as a cautious indicator for continued growth in the UK economy."

The best cinema ads of the year

The future of strategy is synthesis

The three Ts: the key behind the radio breakfast show

TV adspend growth stalls and forecast to shrink in 2017