The growth in mobile adspend is contributing to a decline in ad viewability levels, according to the latest quarterly benchmark report from Meetrics.

The proportion of banner ads meeting minimum viewability guidelines fell from 49% to 47% in the first quarter of 2017 – the lowest level in nine months.

This suggested that three quarters of a billion pounds was being wasted on non-viewable ads a year, Meetrics said, based on figures from the IAB and PwC.

Anant Joshi, Meetrics’ commercial director UK & Ireland, said the falling rate was a result of mobile now accounting for more than half of display adspend, but having lower viewability rates than desktop.

He said: "The smaller screen size can mean more page scrolling and, thus, more chance of ads being missed lower down a page, plus slower network connection speeds can cause ad loading delays.

"There’s also the legacy issue of desktop ads served on mobile which don’t format properly, despite the use of responsive design."

These issues were compounded by the increasing amount of mobile content consumed via apps, in which ads are more likely to be at the bottom of a page, and so don’t always get enough attention, Joshi said.

He added: "Unfortunately, we’re still seeing a lot of talk but not the required intense effort to increase viewability and improve campaign ROI. This needs to change."

Ads are deemed viewable if they meet the IAB and Media Ratings Council’s recommendation that 50% of the ad is in view for at least one second.

The UK had the lowest viewability figure of the four European countries studied for the report - although Joshi said that the same issues affecting the UK were found across all four. 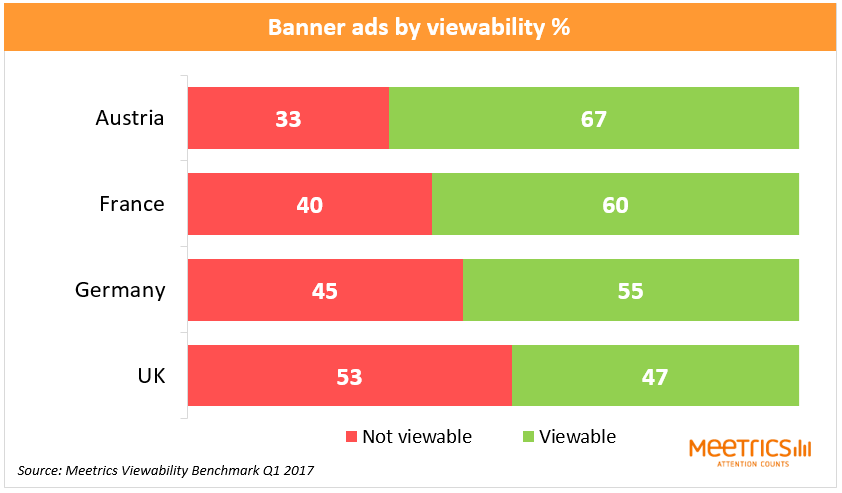 Online ad fraud is a game of whack-a-mole