For two days, the California Dairy Dispensary, envisioned by Deutsch LA, will share the street with the area's well-known cannabis shops.

Dairy, a staple of childhood diets and adult break-ups, is getting a marketing update that will push the feel-good qualities of milk, cheese, yogurt and ice cream much like MedMen would retail sativa, indica and hybrid.

Giving a creative nod to area cannabis dispensaries, the California Milk Advisory Board (CMAB) will open a pop-up California Dairy Dispensary in the Venice Beach neighborhood of Los Angeles.

Open only two days -- Feb 20 preview event followed by a public opening on Feb 22 -- the dairy dispensary pays homage to some of the already familiar marketing tactics of the neighboring dispensaries on Abbot Kinney Boulevard.

CMAB/Real California Dairy’s advertising agency, Deutsch LA, begins the parallel experience by putting a golden, neon cross in the window, much like a cannabis dispensary uses a bright green one.

Inside, the theme will continue with dairy docents, who will educate visitors about the soothing effects of ice cream and butter.

"We are playing off a moment in culture where all of a sudden, there’s the normalization of cannabis," said Mike Frank, senior vice president, creative director at Deutsch LA. "Lots of people who were not even into cannabis are now very curious and seeing other ways of self-medicating—that is what we are playing off of."

Deutsch LA started to play around with the mood-altering elements of dairy with its "Enter the Golden State" integrated campaign for Real California Dairy late last year.

A trippy commercial showed people blissfully transcending their ordinary lives through yogurt parfait and grilled cheese and floating through a California landscape, imagined by Lewis Carroll. 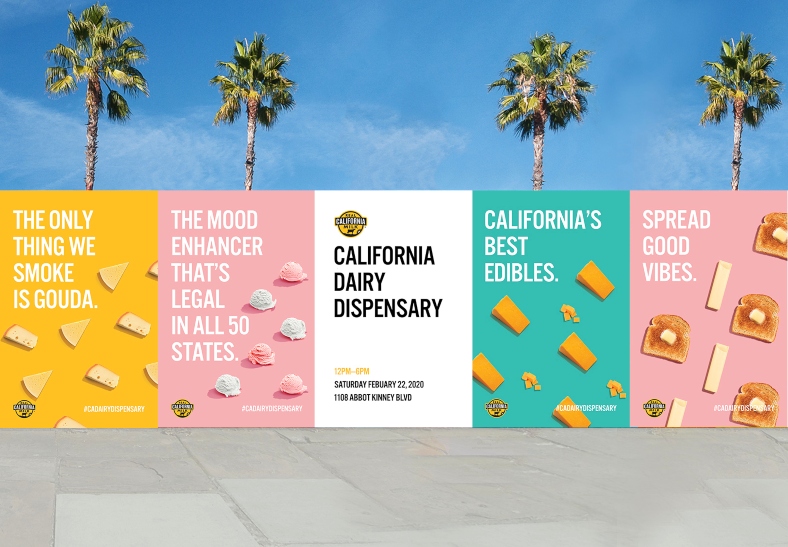 "With Enter the Golden State, there is an obvious linkage, hopefully, from that state of mind to the notion that California dairy has the ability to improve your mood," said Trevor Kuhn, senior vice president, creative director at Deutsch.

"No one eats a bowl of Brussels sprouts after a break-up," Kuhn continued. "There’s something to be said for a bowl of ice cream to improve your mood."

The dispensary will be promoted locally with wild postings across Los Angeles and social media. Deutsch LA is also creating a microsite for the dispensary to push the self-medicating concept of a bowl of ice cream to a wider audience.

Dairy products are expected to grow 5.2 percent globally between 2019 to 2025, hitting $645.8 billion in sales, according to a report distributed by Research and Markets.

Still, dairy’s market share continues to be challenged by almond, oat and other options. For example, Mintel research put non-dairy milk sales at a 61 percent gain between 2012 and 2017.

"There are a lot of dairy alternative options now, but we really feel that dairy provides that level of comfort that only dairy can provide," said Kuhn. "Cashew cheese just doesn’t feel the same."

When tax titans attack: H&R goes up against TurboTax

The gluten-free symbol is getting a bolder look

'Not a Gun' campaign revisits the specter of police shootings

What do Santana, Grateful Dead's Mickey Hart and Bob Marley have in common?