This year's A List may be characterised by a sense of seriousness but, luckily, adland's elite are still prepared to laugh at themselves as they spill the beans on their most annoying - and sometimes even revolting - habits.

If the 2017 A List revealed an industry preoccupied by a fear of looking back – prompted by the doom that most of adland feared Brexit would bring – then at least our 2018 A Listers were given the chance to look forward. And we’re delighted that they shook off (most of) last year’s gloom to focus on positive future opportunities. Individually and collectively, professional ambition was very much on display. But they were under no illusion that 2018 isn’t going to be hard work.

Some of our A Listers used this as an opportunity to proclaim a corporate or personal mission statement that, however laudable, could sometimes appear baffling as it disappeared into the realms of management speak. Along with all the generic, uplifting guff about "utilising new tools to deliver outstanding work to fuel our clients’ growth", there were some particular highlights of this genre.

Nick Hugh, chief executive of Telegraph Media Group, wrote that his ambition was: "To ensure a long and prosperous future… by successfully executing on the new ‘registrations-first’ Telegraph strategy… shifting to a data-led, customer- first execution across the business enabled by a culture of inclusiveness and innovation."

This statement is indicative of the sense of seriousness that pervaded the A List this year, perhaps more so than in any other preceding year, as the top talent prepares to brave the crosswinds that are about to blow – and there’s nothing wrong with that. But there were still moments when the best of the best were able to have some fun at their own expense.

Some ambitions were more prosaic than Hugh’s and, perhaps, set more achievable goals. PHD’s Mark Holden, for instance, wanted to "drink more"; Mcgarrybowen’s Angus Macadam hoped to "get a dog"; while Dave Trott planned to "avoid any mention of Brexit" (fat chance of that, Dave – of which, more later).

And who wouldn’t love to see the ambition of Pearl & Dean’s Kathryn Jacob achieved: "Build on the entertainment partnership [ESI Media’s] Jon O’Donnell and I unveiled at Nabs Stranger Than Summer. If we can carry off being Ken and Barbie, anything is possible… If you weren’t there, think of a cross between Tubbs and Edward, Whatever Happened to Baby Jane? and This Morning."

Such possibilities seek to remind us – if such a reminder were needed – that we are blessed to work in an industry where strength of character and the ability to have fun are still held in high esteem.

When asked to name an industry leader who had impressed with their ability to transform a business, it was heartening to see so many names from adland quoted. A Listers to be named multiple times, thereby proving how advertising is at the vanguard of transformational change, included Anomaly’s Camilla Harrisson, Uncommon’s Nils Leonard et al, Havas’ Chris Hirst, Adam & Eve/DDB’s James Murphy and The Guardian’s David Pemsel.

However, at the top of the list stood Dame Carolyn McCall, formerly of easyJet and now the newly installed chief executive of ITV. Elon Musk (pictured, below) was a popular choice and special mention goes to that famous champion of business and capitalism, Jeremy Corbyn. But the chance to indulge in some log rolling or, dare we say it, to climb the career ladder proved irresistible to some. The most admired leader of JCDecaux’s Ben Maher was Jean-François Decaux; Poke’s Nicolas Roope chose Publicis chief Arthur Sadoun and ISBA’s Debbie Morrison named her boss, Phil Smith.

Similarly, Anna Watkins picked her boss David Jones, while Bartle Bogle Hegarty’s Neil Munn and Ben Fennell cited their key client, Dave Lewis of Tesco. Most unashamedly blatant of all was Y&R London chief executive Paul Lawson, who said: "I thought David Patton’s recent decision to appoint Paul Lawson to run Y&R London was up there with JFK putting a man on the moon."

Ah, Paul Lawson. No A List would be complete without the annual bout of sparring between him and Jonathan Burley, with whom he was reunited at Y&R London thanks also – presumably – to Patton’s prescience. For this we can be grateful for providing some levity. Burley’s big ambition for the year eschewed both management speak and simple, achievable goals. Instead he hoped to finally "break" Lawson: "I intend to use every tool at my disposal; daily mockery of his choice in stretch denim; persistent, pointless contraryism in every meeting; hiding in the men’s toilet all day so that I can leap out at him when he wanders in for a post-prandial BM after lunch."

For his part, Lawson appeared resigned to his role. When asked to describe his side-hustle, his answer was: "I’m a part-time organ grinder for Jon Burley’s side-hustle as a tutu-wearing, dancing monkey act."

In fairness, it is also to his credit that Lawson knew what a side-hustle was. For some, the question was as baffling as last year’s request to name their favourite Pokémon character. Daniel Kleinman spoke for many of a certain age with his response, saying: "I have no idea what that means – it’s certainly not English as I know it." However, he later went on to reveal that this most distinguished of directors has taken up an unlikely pastime that might prove useful if the Brexit naysayers are proved correct and the country becomes a mediaeval backwater – blacksmithing.

Kleinman was not alone in his incomprehension of the question: Sir John Hegarty replied with "???" while his BBH colleague Alison Hoad wanted her fantasy AI assistant to create one for her (this was topped only by Now’s Remco Graham, who wanted the AI assistant to tell him what M&C Saatchi’s Justin Tindall was bored by on any particular day).

But there’s going to be precious little time for boredom in 2018. Given that work pressures for advertising’s elite make side-hustles a pipe dream for many, credit must go to those who find time to pursue personal entrepreneurship. Some invest in or mentor tech start-ups, some help underrepresented groups break into the industry (and hats are tipped to that) while others are lucky enough to have their artwork displayed in galleries. Leo Burnett’s Mark Tutssel spends his spare time restoring country homes as a side-hustle – an occupation seemingly more time-consuming than that of Thinkbox’s Tess Alps, who runs her own coconut shy at the Aldbury May Fair. For most, coaching children’s sports teams or running a taxi service for their offspring takes up what spare time they allow themselves. While Nik Studzinski of Karmarama hasn’t yet got a side-hustle of his own, he perhaps fits better in the hobbyist category also occupied by Kleinman. His goal? "Starting a foundation dedicated to eliminating the phrase ‘side-hustle’."

The year 2018 has allowed Campaign to refine the A List slightly – welcoming new members, retiring some older or defunct ones and refreshing those influencers who are driving the industry forward. It also led to some interesting in-book juxtapositions, with the procurement expert Tina Fegent finding herself alongside Fennell. Fegent’s fantasy Campaign headline, she told us, would read: "Thank goodness for procurement – the saviour of the marketing universe." Which contrasted spectacularly with Fennell’s response to the same question: "Conflict, procurement and speculative pitching all gone for good." Oh.

The pairing of David and Sarah Golding also made for interesting reading: the person who impressed the former most by their ability to transform a business was, with remarkable loyalty, his wife. Her answer was… Johnny Hornby. We hope that doesn’t lead to embarrassing silences at the breakfast table in their Maida Vale mansion.

"I thought David Patton’s recent decision to appoint Paul Lawson to run Y&R London was up there with JFK putting a man on the moon."
Paul Lawson, London chief executive, Y&R

For a collection of people so clearly at the top of their game, it’s reassuring to see a keen sense of self-awareness, despite the accolades and adoration. So Krow’s Nick Hastings is thankfully aware that his spitting is both professionally annoying and personally embarrassing. And Lida’s Matthew Heath realises his nose picking might not be to everyone’s taste. There are even those who confess to indulging in a little onanism at work – there’s no need to name them, they know who they are – but if such behaviour helps to produce sticky content, who are we to argue?

But the question about embarrassing personal traits proved to be a surprising confessional, revealing all sorts of odd habits. Grey’s Caroline Pay deserved particular praise for this candid admission: "I’m a cheek-chewing, mispronouncing, food-spilling, hair-twirling, potty-mouthed, dyspraxia control freak with eyes that move independently of each other." While, according to Pay at least, this behaviour might be so ingrained as to be unchangeable, we can only hope that Ben Tollett of Adam & Eve/DDB does not repeat one of his recent personal lowlights. "I recently picked a spot so badly it turned into a massive crater so I freaked out and sought medical advice. I’d like to apologise to Dr Shef and Dr Williamson for time-wasting." 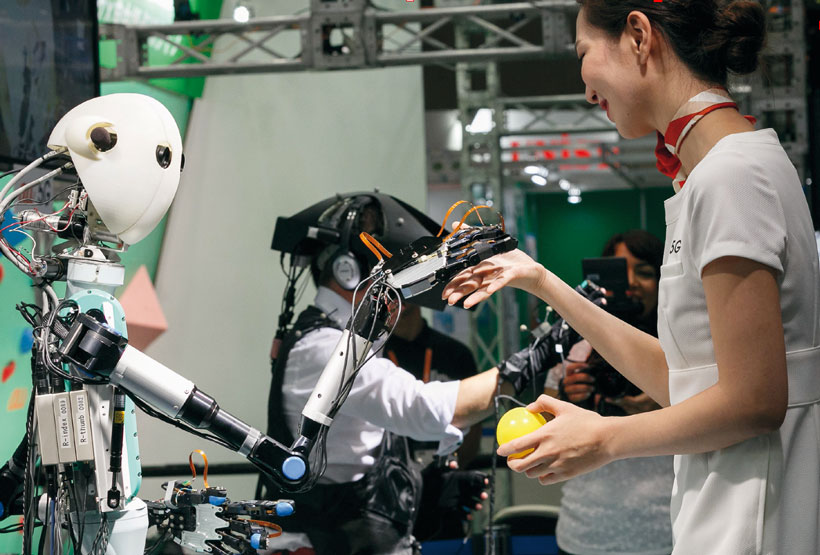 Such honesty was surprising and uplifting, given that many preferred to deflect the question to their partners or colleagues. Staff at The Guardian will no doubt be relieved to hear that when chief executive Pemsel resends an email to which he hasn’t received a timely enough response, he realises the addition of "Thoughts?" is an irritant. Similarly, Tom George of Group M’s regular exclamation of "We have a lot of work to do" seems to have seeped into his own consciousness and has, perhaps, lost some of its meaning on the way. The final words must go to M&C Saatchi’s Moray MacLennan, who finds it difficult to pick just one annoying professional trait, instead citing: "Taking credit for everyone else’s ideas – as long as they are good, of course. Referring to my not just one but two appearances on Question Time… General impatience. Humbly offering up my creative solution to any brief with the words ‘you must feel free to ignore this or throw it into the bin’ but saying it with an underlying menace."

If honesty and seriousness were the theme of this year’s A List, then the many names who hoped Campaign would be the organ to break the news that Brexit (sorry Dave Trott) had been cancelled might be disappointed. Other fantasy headlines will prove similarly elusive. The dream of OgilvyOne’s Charlie Wilson that we splash with the line "Nils Leonard becomes a recluse" might be a fantasy but we are pleased to have already fulfilled the wish of Mcgarrybowen’s Paul Jordan, who wanted to read: "Mother co-founder Calcraft surprise choice to head Dentsu Aegis UK and Ireland."

In an era when diversified agency services are de rigeur, we look forward to seeing how Anomaly fares in its efforts to increase its revenue streams. If Carl Johnson’s headline is to be believed: "Anomaly earns exponentially more from cannabis IPO than it ever did from advertising." A bold move and certainly one that the management consultancies are unlikely to be able to ape.

So no matter how hard you all have to work in 2018 to find new revenue streams, achieve lofty ambitions and juggle side-hustles while doing your day job, it’s important to remember that advertising remains a people business. No AI assistant will ever grace these pages. The final words must come from the fantasy Campaign headline of Grey London’s Leo Rayman: "‘Don’t be a can’t,’ says can-do Rayman."

View from a garden: Cheer the fuck up

The mother of all agencies set the bar for British creativity

Happy birthday Mother: 10 of the agency's most creative personal projects