Cheerity is working with the New Virginia Majority and others to drive positive actions.

Social media-based tech company Cheerity has been getting involved with causes and movements that drive change since it launched four years ago – including work with the United Nations and Partnership for a Healthier America. Now, the platform is using its expertise to drive action and behavioral change in politics.

Campaign US caught up with Angela den Tex, co-founder and COO of Cheerity, as well as Tram Nguyen, co-executive director of nonprofit New Virginia Majority, to hear about the company’s recent successes in driving voter participation and more.

Find out how Cheerity is using its micro-targeting technology and social media prowess in the Q&A below.

How did you get involved in politics/voting?

Den Tex: We’ve been working in the purpose-driven space for brands and non-profits since launching Cheerity in 2016. Last year, we launched a number of campaigns designed to drive positive actions and behaviors, in topics from climate change (with the United Nations) to making better choices around health and exercise (Partnership for a Healthier America), and in supporting businesses that have a positive impact on society (B Lab). We always talked about the potential for impact Cheerity could have in the political space, so when we connected with New Virginia Majority (NVM), an organization that does year-round voter engagement, advocacy and community organizing, we saw the perfect opportunity to collaborate.

NVM is an incredible group with a very powerful message: Democracy, justice and progress is for all of us. They represent the people whose voices have been discounted. They’ve had enormous success knocking on hundreds of thousands of doors and conducting outreach across social, but their problem was converting social campaigns into real actions on scale--and that’s where we knew Cheerity could be a game changer.

Tell me about the New Virginia Majority project and how micro-targeting helped sway voters.

Den Tex: For "Get Out The Vote," we started by running paid social ads featuring regular people -- people who matched the audience we needed to capture and served them in the districts where it mattered most. Those visually-driven ads encouraged people to join in, share their own photo, and spread the message, along with their commitment, to their friends.

Once people clicked, they could add a custom frame to their photo and share it on any social network as a public commitment to vote.  A crucial piece of this is that it all happened inside of whatever social network app they were already using without having to download something new or sign up for anything. This is because getting people to do something, especially anything new, is difficult, so you need to make it as easy and frictionless as possible.

Which demographic participated the most?

Den Tex: This campaign in particular had its highest participation among those aged 55 and up, which tells you how easy it was. And one out of every two people who clicked the ad completed the process. That’s a 50 percent conversion rate, which is massive. Those people all voluntarily added their framed photo to the campaign gallery, most sharing that photo with their friends across social media. It all became very personal to the participants, and in scrolling through the individual faces you can see just how much it meant to them.

Our friends tend to be like us, and often live near us. So if NVM was able to invite people to raise their hand and commit that they are voting, their friends would see it too and those people then brought in more friends, who then brought in theirs. That’s how it worked for participants.

The other powerful piece of course was the Cheerity dashboard: which gave NVM the ability to track in real time the impact of its campaign, along with every participant in it. They could track: geography, connections, influencers, demographics and more. That’s extremely valuable information for a group that is always seeking to create community build leaders and passionate organizers -- at scale.  We give them a path to directly engage those people.

So many people and groups worked hard on the effort to flip Virginia’s legislature and no doubt NVM was a huge part of that. For us, it was absolutely thrilling to be able to help make that happen.

What have you been working on with New Virginia Majority since the election?

Den Tex: After the election was over, we rolled right into issue-based campaigns with NVM. Their work is year-round and doesn’t stop. They helped get these politicians elected and now have to make sure they deliver on their campaign promises. One of those promises was the issue of Drivers Licenses for All. It’s a hot topic, especially for the Hispanic community. 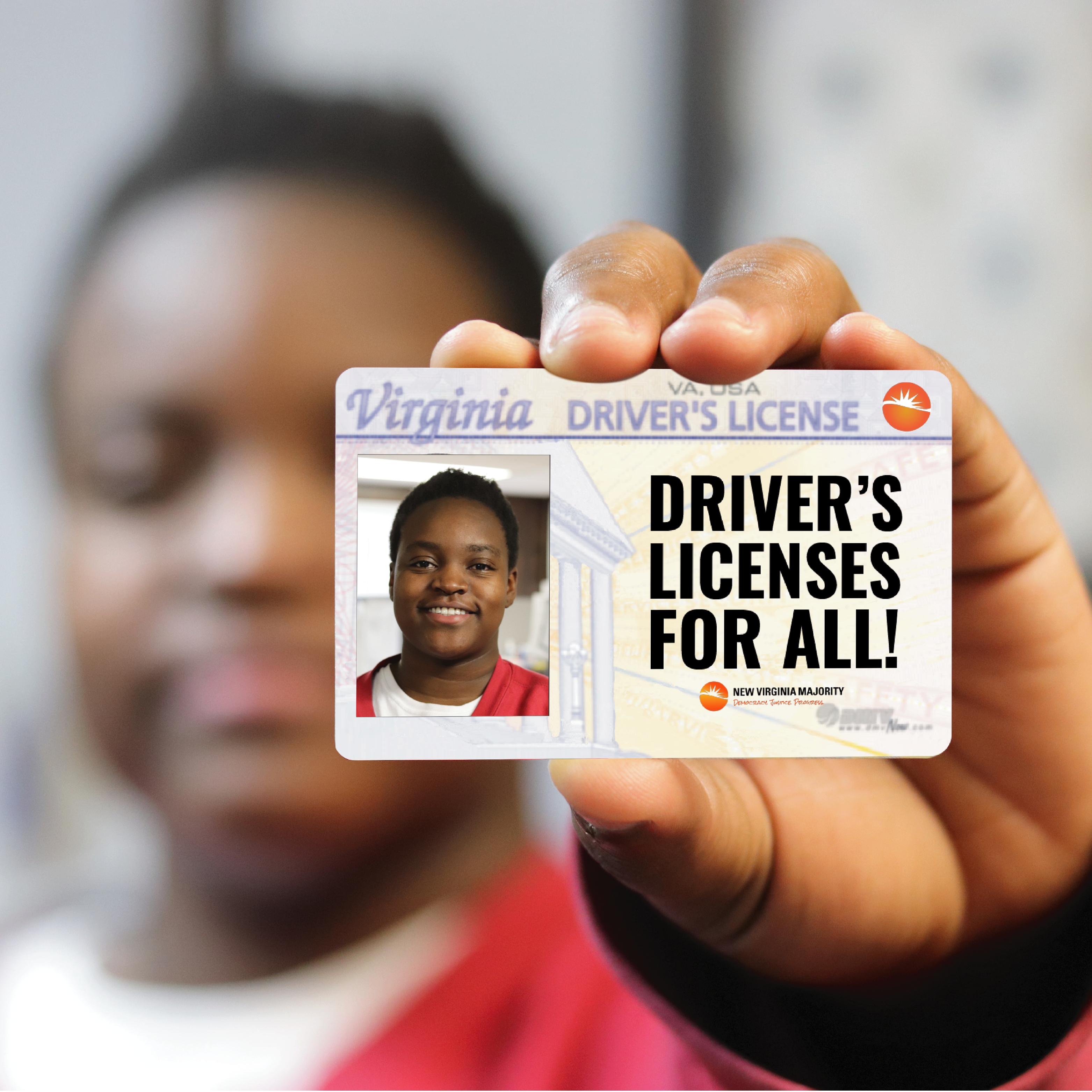 The Cheerity campaign, which had a Spanish-language version, allowed people to add their photo to a mock drivers license and share it in social media. Performance was even better than the "Get Out The Vote" campaign on every metric we track. The photos and names collected were presented as a visual petition to the general assembly and that bill passed earlier this month. We’re now preparing for a big Get Out The Count campaign for the upcoming Census.

And you worked with Democrats.com too? Can you tell me more about that?

Den Tex: Democrats.com is a large online community for progressive activists. They’re a partner of the Women’s March and we worked with them on their campaign to support the march. They were giving women, and everyone else, an opportunity to share their support of the movement. Whether someone was marching in person, or maybe they couldn’t, or lived too far from a March, they could join the "virtual march" with their framed photo. One of the things this group did was use our platform for message testing. They had multiple versions of the frame that emphasized different sentiments, like "Women will win in 2020" or "I will March for Choice." Our platform gave them the data to know which messages resonated best with their audience. With all activity in the campaign happening over just a couple of days around the March, it was incredible to see people from all over the country adding photos, they just flew in.

How does your targeting differ from what politicians did in the past with Facebook or social ads and targeting during elections?

Den Tex: The difference with Cheerity is that our campaigns grow organically from friend to friend rather than being fed, or served, to you by a propagating cause or organization. And our customers, and users too, can choose to use FB or any other social platform or network.

Hashtag campaigns are not new: "Share a photo and use our hashtag to show support." But the pickup is low, and you’re competing for little bits of attention and time. Most of us share content on Facebook and Instagram in our personal networks with friends only. So as an organization, you never truly know how effective your campaign really was. In most cases, you can’t see the photos, and you certainly won’t turn them into email addresses. That trapped value stays hidden behind the walls of social media.

That’s where we come in, helping you craft an assignment that really resonates with your audience. Sure, you can add a hashtag, but we don’t need it to track every participant and share. We help you create a relationship with these people, and even some of their friends, and you can engage on your own terms. So yes, we help grow social reach but it goes beyond that.

And this would work for candidates too. You could think of those emails as donor cultivation. These are people who just raised their hand and told their friends they support you. Many of them will be ready to take the next step.

Den Tex: We want to see our platform be used as a powerful force for positive expression during this election year. We’d like to see it applied to all of the things people care about - the causes that move them and the issues they’re passionate about. We also want to see brands putting their efforts behind supporting these same things. If we can make sure what shows up in our social feeds helps us tune in as opposed to turn off, we’re getting somewhere.

Are you expanding to help other states?

Den Tex: Our success in working with New Virginia Majority has already led to more work in the space for us, including at a national level.

What are some challenges you have? How about any trolls?

Den Tex: It’s a question every new customer asks. The truth is, we don’t see much negative content. It’s the general nature of our campaigns and what we do, but when it does happen we have content monitoring tools in place that allow customers to deal with it quickly. These tools let them quickly hide or even remove unwanted content or queue photos for approval before they get added to the gallery. And because our posts are link-based, removing content also effectively removes that content from the social networks it was posted to.

What results has NVM had so far from working with Cheerity?

Tram Nguyen, co-executive director, New Virginia Majority: Well, the election results this past November were certainly the kinds of results we love to see. We have the most diverse legislature in the General Assembly’s 400-year history. Our strength has been year-round, boots-on-the ground organizing and voter engagement. Growing a constituency online-to-off has had its ups and downs. Cheerity’s platform allowed us to customize and amplify voting and issue messages on social media in powerful ways we hadn’t before, and helped us reach new communities online in larger numbers and in more locations -- and we hope that that these online political homes will continue to grow and support our offline work.

What about your social audiences?

Nguyen: Our social audiences also grew. People responded virally to these positive social messages, an engaging visual frame they could claim, and an easy-to-use platform -- a dream trifecta for engagement with audiences you can’t always reach in person. And during that process, we were able to easily A/B test what messages and visuals worked, helping us hone our communications.

These components paved over the usual digital organizing roadblocks to persuading someone online to become involved meaningfully -- via friends, community, and community interests -- in our organizing and advocacy work. We have been able to encourage people to take action at higher rates than our usual social calls to action, and there is much more we can’t wait to experiment with and learn.

And what's next for Virginia?

Nguyen: The fight for our future continues, beyond this election cycle and the next, but our work doesn’t begin or end with the elections.  We’ll continue to center the working class, people of color, immigrants, women and young people across Virginia as the drivers of an agenda that takes Virginia forward - toward a more inclusive, reflective and just democracy for all of us. To do this, we must build authentic relationships with the communities we serve. At a time of fake news, political chaos, and skepticism, we have to leverage trusted messengers that are able to cut through the noise and reach voters where they are, including using new, innovative ways to reach them both online and offline.

What canvassing can teach you about democracy, America and hope

Why does society continue to overlook diverse work?

Black Twitter: How to embrace culture and avoid pitfalls