'What we've learned from this campaign is that transparency can only help us.'

Just because women don’t talk about money as much as men doesn’t mean they don’t understand finances as well as their male counterparts. What it comes down to is cultural stigmas and taboos – something the Decoded Creative Directors Laura Holmes and Leah Butler decided was time to bust up when they began working on the Visa business in 2018.

Butler, who had previously worked on Visa at other agencies, and Holmes used their own life experiences and personal frustrations, as well as in-depth research, to inform their creative work.

They examined all the aspects and assumptions about how women feel about money and why it’s still an uncomfortable topic to discuss.

"I noticed at the time that the answer for a lot of financial organizations when it came to women was around financial wellness advice, and I personally feel that’s a huge assumption that these conversations aren’t happening or that financial empowerment isn’t happening because women don’t’ know better," said Holmes.

After conducting their own research, Decoded found that the reason why women are avoiding these topics isn’t because they don’t know any better – it’s because they’re afraid of judgment and shame.

"That was our way in, so we created a platform to bust that taboo," added Holmes. 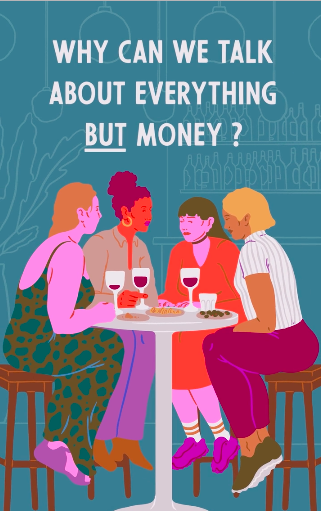 The dynamic duo, along with the help of some Decoded colleagues, got to work on the first iteration of Visa’s campaign: Money is Changing 1.0. It threw away the Visa color palette and brought in fresh shades of pinks and purples, and it started partnering with the likes of Refinery29 and Girl Boss events.

"We knew we needed to make the work look different than the work that was already in market from Visa," said Holmes. "And we wanted this content to look edgy."

The first iteration built relevance among key demographics of younger women, but it was losing brand recognition because people weren’t associating the new look and feel with Visa.

That’s where Money is Changing 2.0 came in.

For year two, Decoded’s creative team decided to integrate Visa’s iconic blue and gold colors into the content a funky way to help consumers link the work back to the brand.

So far, according to a recent brand lift survey, Visa is seeing an 8 percent point lift in the campaign among millennial women and a 6 percent jump in innovation, year-over-year.

Some of the best-performing work on the campaign has been content that features women – famous or unknown – sharing real stories about their financial experiences, struggles and goals.

"This isn’t Visa providing 10 ways to reach your financial goals, but it’s other people sharing their stories and giving women actionable feedback on issues like finding out you’re getting paid less and how to handle that," said Butler.

And the new work coming out soon from Visa and Decoded further evolves the money topic by surfacing new cultural ideas around important milestones for millennial women. Rather than celebrating the usual engagements and babies, Visa will look at key moments like paying off college loans, buying a house and getting a raise.

"Decoded’s work on Money is Changing single handedly took a conservative, passive brand and turned it into one of humbled purpose where women can begin to discuss, understand and realize their financial prowess," she added. "To echo the campaign’s rallying cry, ‘conversation is power’ we can’t wait to hear what Leah and Laura say next."

One of the best parts about working on this campaign, Butler said, has been watching male coworkers at Decoded evolve their understanding about women and money throughout the process, including Founder and CEO Matt Rednor.

"We call Matt an intersectional feminist," she said. "He has taken the reigns and run with it and he’s constantly learning. I’m very proud that our campaign has opened up a lot of eyes within the agency."

Butler added: "‘What we’ve learned from this campaign is that transparency can only help us and there’s freedom in transparency."

The state of advertising has never been better

Greater need for creative in media pitches as part of rebundling