Media buyers warn advertisers will continue to shun the broadcaster over Neil's exit, declining audiences and perceptions that the channel is on the 'Fox News road'.

The departure of GB News presenter and chairman Andrew Neil and a perception that news channel is leaning towards becoming a British Fox News threatens the commercial viability of the beleaguered channel, media buyers have warned.

This week, Neil said he had left the fledgling broadcaster to “cut back” on his “portfolio of commitments”, although he will continue to appear on Nigel Farage’s programme each week.

He added: “I wish GB News well in continuing to fulfil its founding promise and mission to reach audiences currently underserved by existing news broadcasters.”

Several media outlets report there are other reasons why the veteran political broadcaster has exited. These include falling out with chief executive Angelos Frangopoulos over the GB News’ direction, frustration about the ongoing technical issues, the loss of senior staff – including several high-profile producers – and the hiring of right-wing presenters to battle culture wars.

The Guardian reported that Frangopoulos is keen to recruit firebrand right-wing shock jocks intent on stirring controversy by pushing populist opinion rather than balanced debate. It’s a strategy used by the previous news channel he led – the Murdoch-owned Sky News Australia – which earned a reputation in Australian media circles for peddling misinformation and far-right conspiracies.

It’s also a formula that helped elevate Fox News to become the most-watched (and contentious) cable news channel in the US.

Media buyers in the UK have warned that Neil’s departure and a Fox News-style approach could prove disastrous for a channel that is already struggling to attract viewers.

Starcom head of investment John Heather told Campaign that although there was uncertainty from advertisers ahead of GB News launching, its line-up of seasoned broadcast professionals, such as Neil, provided the channel with credibility.

This began to unravel as it became embroiled in controversies, including an advertiser boycott, production issues and headlines about presenter Guto Harri being sacked for taking the knee on air.

“I think there has definitely been a lack of support from advertisers. Advertisers don't want to be associated with negative publicity,” he said. “Almost all of our advertisers have chosen not to be on the channel and news of Andrew Neil departing will be an even bigger concern to the advertisers still on there.

“It just gives the channel less credibility and if the other well-known news presenters leave on the back of Andrew’s departure, then it's worrying times for the channel."

Another industry leader, who wanted to remain anonymous, said "no advertiser has ever asked us how to be on GB News" and "that's quite telling and, in fact, we have conversations with advertisers about how they can avoid it".

The media buyer added: "With Andrew Neil going, it feels like GB News is going even further right-wing and that makes a lot of advertisers really uncomfortable." 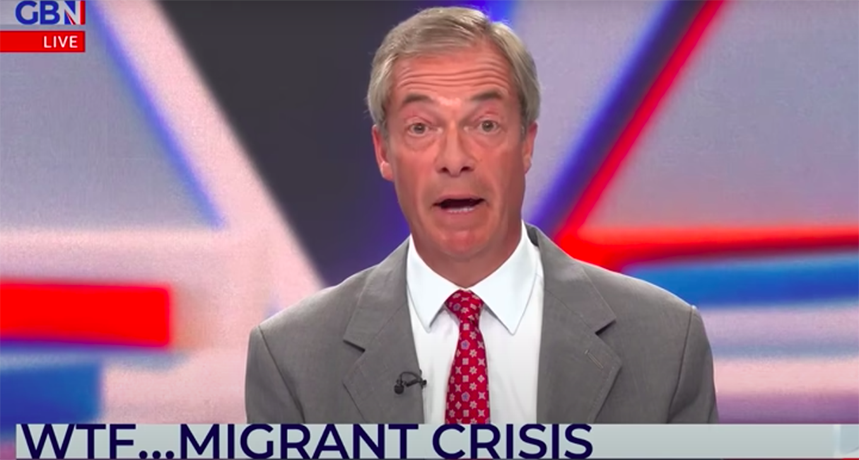 Culture warrior: commentators say Nigel Farage's appointment as a GB News presenter is a sign the channel is changing tack.

Would advertisers miss it?

Some industry leaders believe that even if Neil had stayed on, GB News was proving a hard sell to brands for various reasons, even though it is usually bought as part of a bundle package through Sky Media.

Chief among these are its viewing figures. According to the Broadcasters' Audience Research Board, in the week from 30 August to 5 September, GB News reached 2.14 million people across TVs, tablets, PCs and smartphones, which is well down on its peak of 3.7 million reported in the week to 5 July. By comparison, Sky News reached 6.84 million across the same period.

Some shows on the channel record zero viewers, while the top rating programmes, The Political Correction (with 63,600 viewers) and Farage’s show (44,000), produce relatively small audiences.

“But what Neil’s departure does is run the risk of keeping all of those controversies surrounding GB News alive, and the issues and complexities that brings to advertisers.

“Advertisers will question whether this is really worth it. In terms of the audience sizes and incremental reach compared to what you can get from other channels, most advertisers would say it’s not doing itself any favours as a commercial proposition.”

Another media buyer said advertisers don't have to even worry about rumours of in-fighting and Neil leaving because "viewing figures are so small" and until it can build a "critical mass of eyeballs" it isn't a serious consideration for any media plan.

Others said that many advertisers had already blacklisted GB News, but do not want to make their position public for fear of a backlash.

“Everyone has had those conversations with advertisers about whether they are on it, especially in light of the social-media storm,” a senior media planner said.

In the past, Neil and other prominent presenters hit out at brands that have publicly boycotted the channel, including Kopparberg, Ikea, Grolsch and Nivea.

At the time, Neil said he found it “quite remarkable” that "woke nonsense has reached the boardroom and corporate capitalism is becoming the useful idiot of bigots bent on censorship."

Another development that concerns advertisers is a perception that GB News is “heading down the Fox News road”.

When it launched, Frangopoulos told Campaign the newsbrand would "embrace more regional voices in a positive and inclusive way”, adding: "Anyone wanting shouty, divisive television will be disappointed”.

Many question whether the GB News is living up to its initial sales pitch, while media buyers warn that British advertisers do not have the same appetite to back a Fox News-style channel as they do in the US.

“There are two opposing forces (towards the Fox News model),” Oliver said. “It might increase the viewing base a bit and become more popular, but moving towards populist and controversial content would make advertisers question whether they want to be involved in that. They might actually find it harder to turn those views into advertising opportunities and sales in this market.”

Heather agreed, pointing out that when Fox News was commercially available to the UK market, “we had a number of instances where advertisers did not want to be associated with it”.

If GB News replaces the likes of Neil with ”controversial, shock jock types” that are commonly associated with Fox News, Heather warned: "I think they're going down a road that won't be successful with advertisers at all.”

The advertising boycott against GB News is being led by the activist Stop Funding Hate, which told Campaign that it would be easier to provide a list of brands that still want to advertise on the channel than those that do not.

The list includes Sky, Kelloggs, The NHS, moneymarket.com, and lesser-known entities such as Nathaniel Cars, Appeal Blinds and several outlets in the gold business.

Richard Wilson, a director of Stop Funding Hate, told Campaign: "GB News has already been called out by one of its own contributors for 'demonising trans people at every opportunity'. Now it’s doubling down and becoming even more extreme. Advertisers have been wise to steer clear of this channel and its toxic agenda.”

The7Stars trading director Michelle Sarpong is sceptical about the commercial viability and future of GB News, especially with its current slate of content.

“Over the past two years there has been a turn in the advertising industry. There is increased scrutiny around content, messaging and brand ethos,” she said.

“GB News has clearly fallen short of this and evidence is in the viewing figures. At one point the Welsh language version of Paw Patrol, Patrol Pawennau, pulled more than five times as many viewers as GB News on 24 June.

"Since the launch, viewers have dwindled along with the advertising (revenue), and with the news of Neil’s sabbatical and departure, I’m not sure this project can and will be revived.”

GB News declined to respond to Campaign's questions for this report.

*The original article has been updated with Michelle Sarpong's comments.

Will the GB News channel be a hit with advertisers?