Who had a "dreamy" encounter with Don Draper? Which outdoor executive got involved in a 5am brawl? And who is set to be a judge on The Apprentice? PLUS: Chris Moyles clears up those Capital rumours and Richard Desmond shows his spiritual side

‘I am 100% not moving to Capital,’ says committed Moyles

Media Bitch’s story about Radio 1 DJ Chris Moyles’ rumoured move to Capital caused quite a commotion in the national press.

The gossip, as shared by a tipsy radio mole at the Radio Advertising Awards, was picked up by Beehive City and later found its way into the pages of the Mail, the Standard and The Sun - where it was, apparently, a showbiz "exclusive".

Global Radio’s chief Ashley Tabor has since denied the story at this week’s Radio Festival, but Media Week went one step further and asked a close associate of Moyles to ask the man himself - and the response was black and white.

"I am 100% not moving to Capital," came the reply straight from the horse’s mouth, who revealed he was "perfectly happy", despite his recent payroll issues. "I am committed to Radio 1 and have no plans to move anywhere."

That’s that particular rumour well and truly put to bed, then - although, of course, every controversial DJ has his price. Just ask Chris Evans…

Chantal Rutherford, head of programming for MEC and former producer of Through the Keyhole, has met a lot of celebrities over her TV career, but meeting Mad Men star Jon Hamm trumped the lot - yes, even Donald Trump.

Rutherford had her Mad Men moment at the opening night cocktail party for TV sales fair Mipcom at the Hotel Martinez in Cannes, where Mad Men stars Jon Hamm and Elisabeth Moss were promoting series four of the hit show.

Armed with a contact in common - the lighting director for Mad Men, who used to work on Through The Keyhole - Rutherford "forced herself on Don Draper in the nicest possible way" and spent a "dreamy" five minutes hearing about Hamm’s former career as a teacher.

"He was completely gorgeous, even better than he is on TV," she gushed of the "erudite" and "interesting" actor (pictured below with Moss and Rutherford). "He was slimmer, taller and younger, but his eyes have the same twinkle." 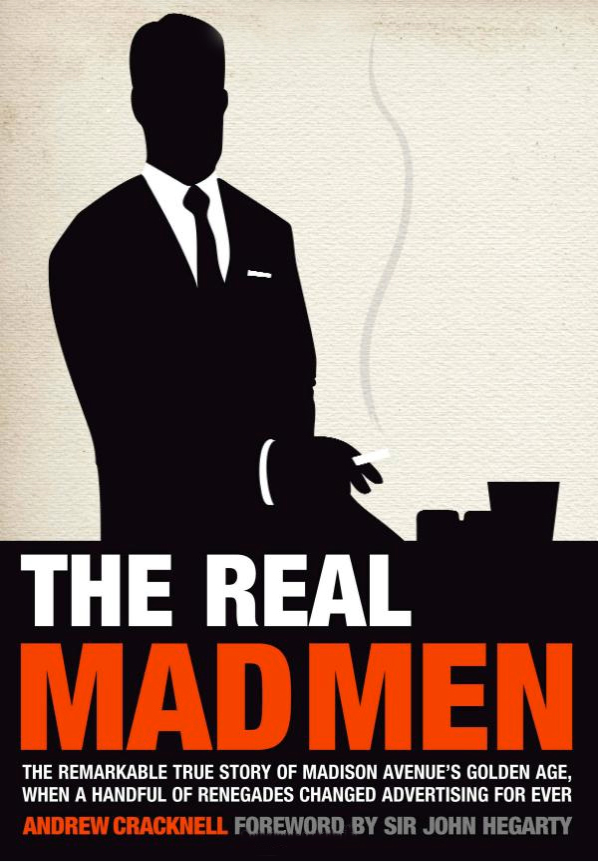 Rumble in the jungle for OOH big cats

On the subject of Mad Men, Wednesday night’s fight storyline was mirrored at an outdoor company’s recent away-day, in a bizarre case of life imitating art.

In Mad Men, Don Draper got into a ruckus with Duck Phillips; in real life, a senior executive of an outdoor advertising firm was punched in the small hours by an unidentified colleague while ‘networking’ in the bar at the internal event.

At that time of the morning - believed to be at around 5am - drink must have been involved, but were there personal grievances at play or was it a sign of internal conflict following major changes at the media company this year?

One thing’s for sure: the rumble in the OOH jungle certainly wasn’t in the spirit of team-building the away-day was presumably intended to inspire.

Gladdis gets himself to the church on time

The fastest race was run by Lennon, who completed the course in 42 minutes, although Ratcliffe finished in a very respectable one hour "on the nose" and Gladdis - who has been doing "months of intensive training" - was "quietly pleased" with his time of 42 minutes (see team photo below).

Gladdis had an extra incentive to get round the course at top speed: he had to be in Tufnell Park by 3pm for the christening of his two daughters, so he hotfooted it in a cab to North London within minutes of finishing the race. Luckily, he made it to the church by the skin of his teeth, and Molly (two and a half) and Aoife (six months) are now "safely indoctrinated into the Catholic faith". Phew! 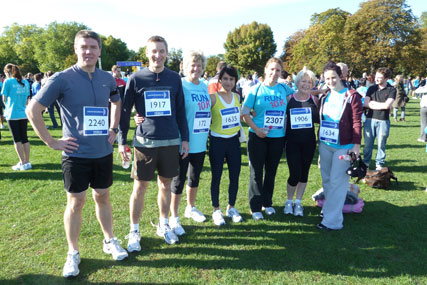 Richard Desmond shows his spiritual side

Later that week, MediaCom’s joint heads of investment Steve Bignell and Claudine Collins were among the 120 guests at Richard Desmond’s celebrity-filled Channel Five party at the Northern & Shell HQ.

By all accounts, it wasn’t a bad night out for a Wednesday, with a three-course dinner cooked by Marco Pierre White and appearances by The Who’s Roger Daltrey and WPP chief Sir Martin Sorrell, who described his childhood friend Desmond as a "media visionary" (pictured below).

Sir Martin’s mum Sally and Desmond’s mum Millie used to meet at the Jewish Care Sobel Centre, and Desmond showed his spiritual side by saying: "I know they are both looking down on us tonight, happy their boys are working hard together not only to make good business… but to make the world a better place."

However, Northern & Shell’s Stan Myerson reminded guests what the multimedia empire is REALLY all about when he said: "We look forward to doing even BIGGER deals going forward… deals that make us all more money." And, as if anyone needed reminding, he added: "Make no mistake, we are not here to mess about." 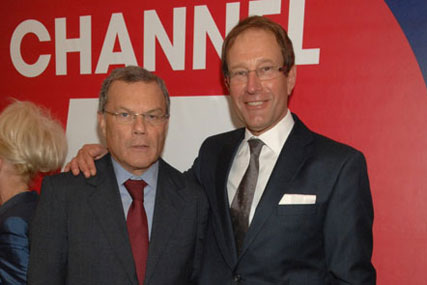 And finally: Which larger-than-life media character spent the day on Wednesday being filmed for next year's series of The Apprentice?

The power lady's involvement as a judge is one of the worst-kept secrets in media - but let's just say it will provide a welcome profile boost for the agency figure in question, who has been out of the media spotlight for, oooh, at least 20 seconds....