Who was the guest of honour at Saatchi's fortieth birthday party? Who was even more handsome than Stephen Miron at the GQ Men of the Year Awards? And who does Mindshare's Ita Murphy have in mind as a potential suitor for her daughter? Read on...

Saatchi reunion the excuse for a ‘damn good party’

Adland legend Maurice Saatchi (pictured below, right, with Peter Mandelson) pulled out all the stops to make Saatchi's fortieth birthday party at the Saatchi Gallery last night a true-blue bash, with creatives outnumbered by the Conservative contingent.

Chief executive of M&C Saatchi Moray MacLennan described the party, which brought together Saatchi & Saatchi and M&C Saatchi for the first time in 15 years, as the celebration of an "extraordinary story", as well as - more importantly - the chance to throw "a damn good party".

"It may be the age of austerity," he told the distinguished guests, "but as far as I am concerned having fun hasn’t been banned. At least not yet." 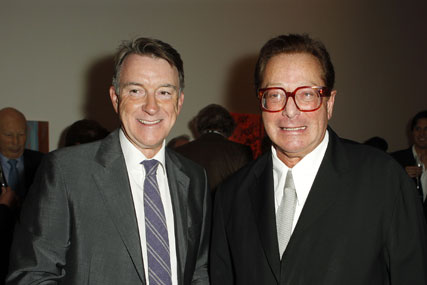 To the Kensington Garden Hotel for the Media Week Awards judging, where the submissions contained a dazzling number of claims for "media firsts" - 12, at the last count - and some fabulous year-on-year increases of more than 1,000%.

However, Bitch’s favourite video presentation featured a reference to the "key meal inspiration period" - which Channel Five’s Mark White, with impeccable comic timing, shot down with a sharp: "What, hunger?"

Meanwhile, the shortlisted Rising Stars used every trick in the book to secure the judges’ votes, with entrepreneur Wil Harris offering to put the judges on the guest list for the launch of his online show starring comedian Harry Hill. "Vote for me," he said, "because I am the only one prepared to bribe you with alcohol."

And Dennis Publishing’s Andrew Nicholls, who flits between London and India, explained why he welcomes far-flung postings with a tactical: "I’m 25 and I’m single." "Not for much longer," said an impressed Ita Murphy, managing director of Mindshare, who declared her 18-year-old daughter would be "winging her way to Delhi" on the next available flight.

From there, it was only a short hop to the Marketing Group of Great Britain’s black-tie dinner at Claridge’s, which was wall-to-wall with senior media faces including Mike Moran, Tess Alps, Andrew Mullins and Neil Jones.

There was a round of applause to congratulate Jill McDonald on being appointed as the first female chief executive of McDonald’s, while the evening’s after-dinner speaker was Al Gore, now in the media business as chairman of Current TV.

Chatham House rules prevent this column reporting on Gore’s illuminating talk, so instead Bitch will mention Global Radio’s chief executive Stephen Miron, who was on fine form despite attending the GQ Men of the Year Awards the previous night, where the Independent’s Simon Kelner won Newspaper Editor of the Year.

Sadly, Miron was not voted "the most handsome man in the room" by GQ.com, who bestowed that honour on Mad Men actor John Hamm, aka Don Draper (below). Miron didn’t seem too bothered though - being seated between Noel Gallagher and Bond girl Orla Kurylenko seemed to make up for it...

Click here for more photos from the GQ Men of the Year Awards. 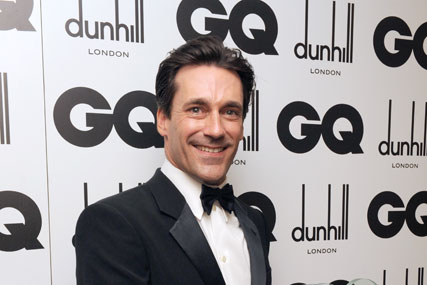 From penthouse to Pampers: Primesight’s in the family way

Meanwhile, 380 outdoor agency, specialist and client guests headed to The Penthouse in Leicester Square for Primesight’s party, which took over the sixth and seventh floors for cocktails, canapes and dancing.

It’s been a hectic few weeks at Primesight, which is not only mid-office move, but has also been busy making "I Love Primesight" babygros for the new-born twins of marketing group head Kim Wilson (pictured below).

Sales and marketing director Nigel Clarkson confirmed: "We are starting our graduate training early this year." 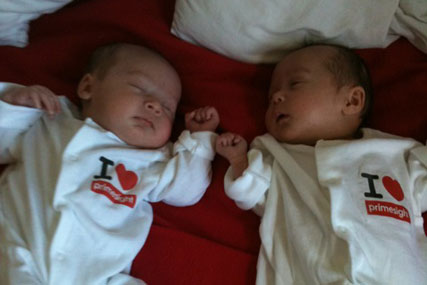 And finally: This column usually reports on actual events but this week, in a break with tradition, Bitch would like to report on two things that DIDN’T happen.

For the record, let’s emphasise that ABSOLUTELY NO-ONE flew to a European country for the day for a long lunch hosted by a media agency, and NOT A SINGLE SOUL enjoyed a day’s fly-fishing courtesy of a media owner.

Got that? Instead, THE ENTIRE INDUSTRY was sitting at their desks working hard on client business for the whole of last week. Just in case anyone was under the impression that certain corners of the media industry continue to enjoy glitzy media jollies. Because that would be EXTREMELY wide of the mark.

Next week: NO PRESS BUYERS allow a media owner to pick up the tab for a three-day break in Marbella…