For Charlotte Diemer, global head of insights at Ogury, one thing is clear: “Attention is the prerequisite to any meaningful impact; if people don’t pay attention to an ad, they won’t remember the brand.”

If this sounds like basic common sense, it is! Which bodes the question — why haven’t advertisers been measuring attention on their mobile ads until now? And another, more delicate question: Are they aware of what they’re currently paying for?

Viewable does not mean viewed

With people typically spending upward of five hours a day on their mobile phones, it’s generally considered an effective space to focus ad dollars. But, like an onion that reveals itself the more its layers are peeled back, when you really look at how ads are (or aren’t) being viewed, you find an awful lot going unwatched, despite what measuring tactics say.

“Viewable doesn’t mean viewed,” Diemer notes. “And the current standard of viewability doesn’t ensure that an ad is actually seen or if it generates attention.”

What measuring attention means when it comes to mobile marketing is defined a few different ways.

“Some companies measure attention as engagement, which means people clicking or swiping,” Diemer explains. “The problem is that it contains ‘activity bias,’ meaning it only tracks physical movement.”

“Another approach for measuring digital ad performance is time spent on a page,” Diemer continues. “But there’s a big difference between something actually being seen and something with the potential to be seen. For instance, an ad may be playing above the fold or further down the page, giving neither of them the opportunity to be seen.”

When it comes to digital video, a key metric used by brands and agencies is video completion rate, or VCR. Based on VCR, if a viewer scrolls across a video ad — for even two seconds — it’s measured as viewable. But “viewability” doesn’t translate into “viewed.” Chances are a viewer will continue to scroll through content while the ad plays off-screen, out of sight and out of mind. It doesn’t register with the viewer, though it is counted as being completed.

“On mobile, brands can have the illusion of achieving high VCR,” Diemer points out. “But without full visibility this is false.”

Ogury’s course correction for the imperfection of measurement tools was to create fully on-screen ad formats, with 100% of the pixels in view the entire time. Users are given the option to close the ads if they desire but when they don't, the format has proven to be more impactful than any other.

To support this statement with data, in January 2022, Ogury partnered with Lumen to conduct a study to measure the attention generated by Ogury ad formats — both in-app and on mobile web — and highlight the relationship between attention and brand recall. As a leading attention technology provider for the advertising industry, Lumen uses proprietary eye-tracking technology to understand what people look at and ignore when they are online. They then turn the data into powerful predictive models of attention.

Here’s how it worked:

1,200 participants agreed to have their phones loaded with Lumen’s eye-tracking software as well as being shown four written articles. The only directive given was to read the articles. That’s it. No further instructions. As each person engaged with the content, they were served various types of ad formats and as they looked, ignored or watched, their eye movements were tracked. To ensure attention was properly measured, Lumen developed a key indicator considering attentive seconds1 per 1,000 impressions. This standard is paramount for accurate attention measurement and is the main expression of the attention generated by an ad.

The results of this study show that Ogury ad formats outperformed mobile outstream by 2.5x and mobile display by 5x — significantly more attention per 1,000 impressions than the market average. 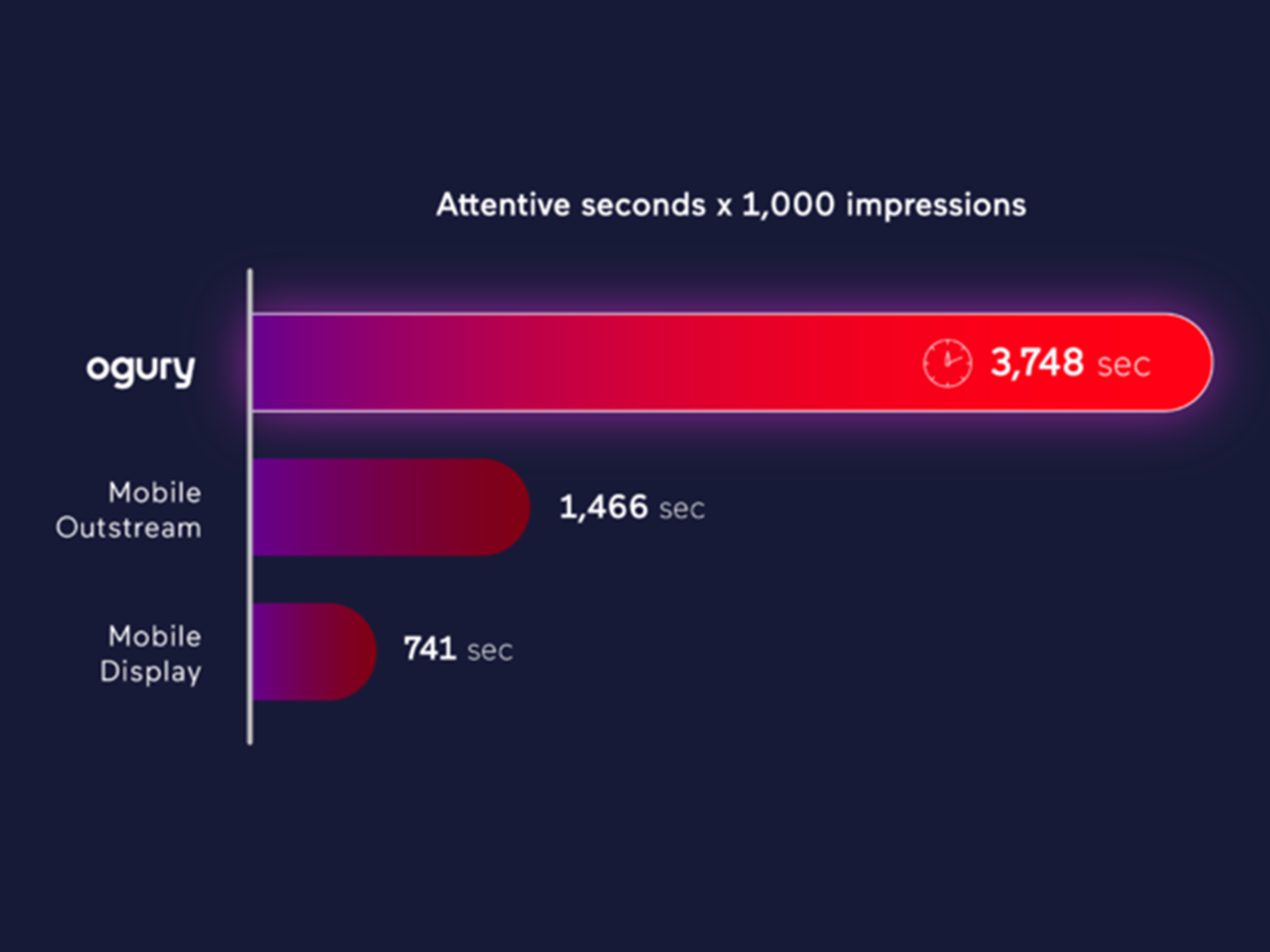 Gaining attention is an important start, but retaining it is pivotal. The study's attention curve, based on users' eye movements, indicates that most people view outstream video and display formats for less than 2 seconds. More precisely, they spend only 1.8 seconds on outstream and barely 1.3 seconds on display. Compared to the industry, Ogury formats are viewed for around 5 seconds on average — 4.8 seconds exactly. Some viewers were even found to engage for longer than 10 seconds. 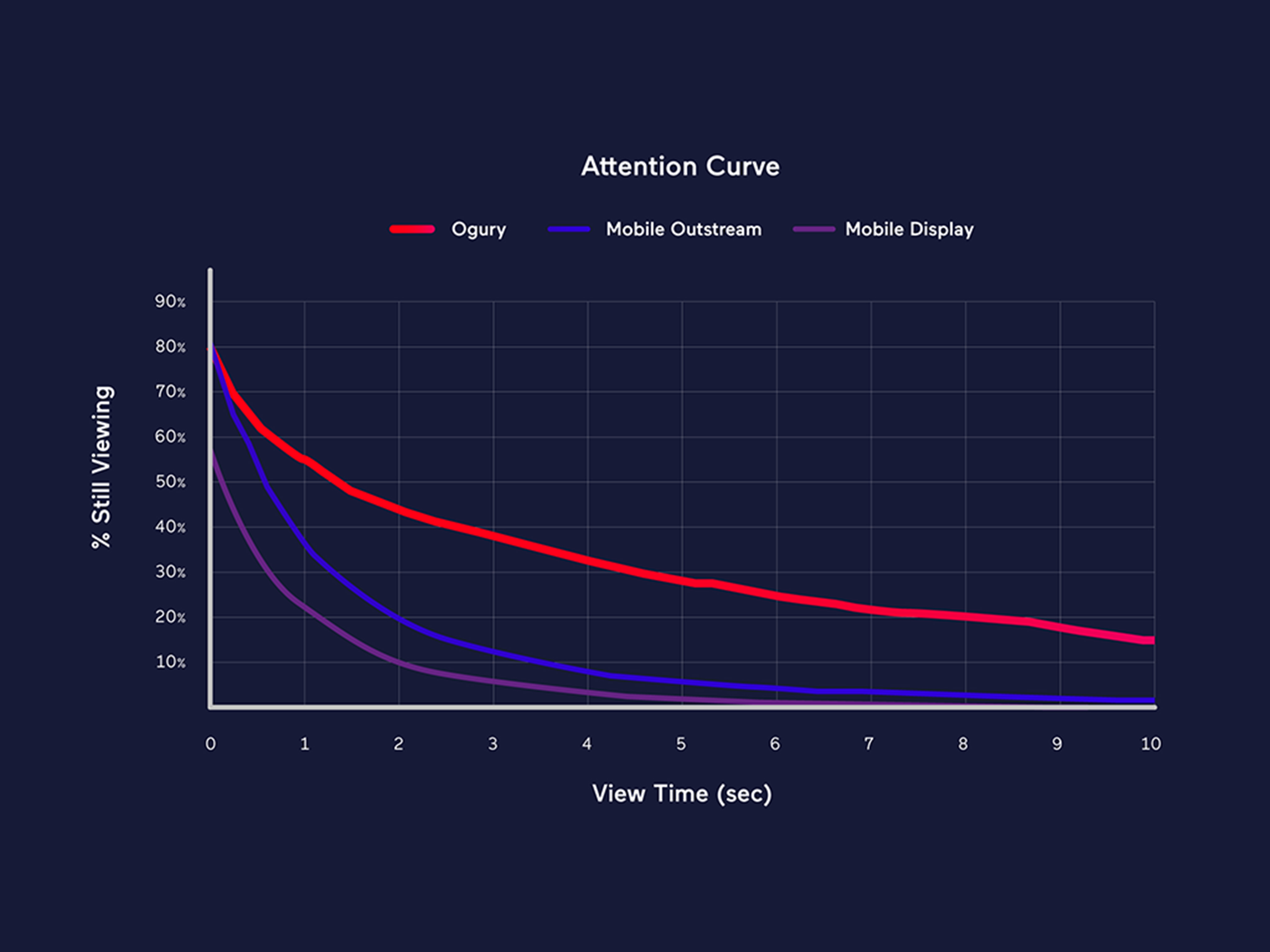 The impact ultimately desired is brand recall. While short amounts of attention can lead to a degree of brand recall, its likelihood increases incrementally as users pay more attention. It follows suit that if your ad is not being viewed, it will not be recalled. Since users spent more time on Ogury ad formats, brand recall was 36% higher than other mobile outstream and display activations — a testament to the importance of attention in brand building. 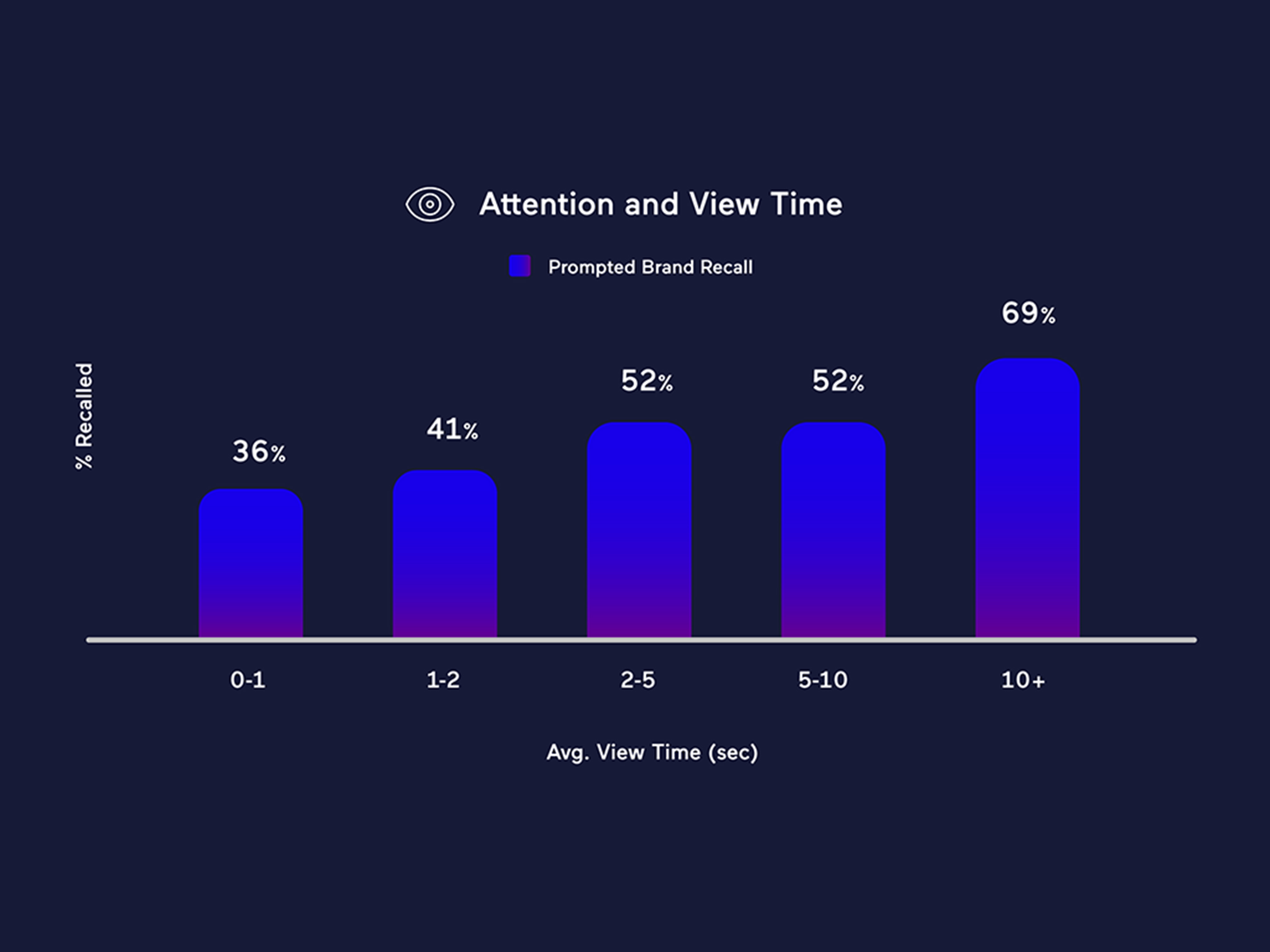 To be seen is to be recalled

“If you buy media you want it to be seen,” says Diemer, returning to the basic concept of brand building.

But as happens so often in life, the simplest solutions are often the hardest to surface.

“We're not talking about revolutionizing the market,” Diemer says. “We're talking about ensuring we use the KPIs and measurements that are readily available to us in a savvy way.”

While it’s not a revolution, it is an evolution.

“There was a time,” Diemer notes, “when there was no way to measure if an online ad was truly visible. Then ‘viewability’ appeared as a measure of the opportunity to see.However, as previously noted, ‘viewable’ doesn’t mean ‘viewed.’ This is why viewability will become obsolete at some point, and attention will soon become the key outcome for brands.”

Learn more about attention in the study’s eBook.