The composer and sound designer on his experience in big National Theatre productions and how he came to advertising.

When I was a child I spent the summers playing music with my granddad and drawing with my grandma. I thought it was normal. My grandfather was an architect but music was his life, and my grandma worked for [the painter] David Bomberg. It’s only now I look back that I realise how lucky I was.

My grandparents were sent to Siberia from Poland in the Second World War and lived there in terrible conditions. They survived but had to march to Israel, joining General Anders’ army.

My granddad bought an accordion in 1942 after the Battle of Monte Cassino in Italy. He played it on the battlefield, and now I play it to my children. 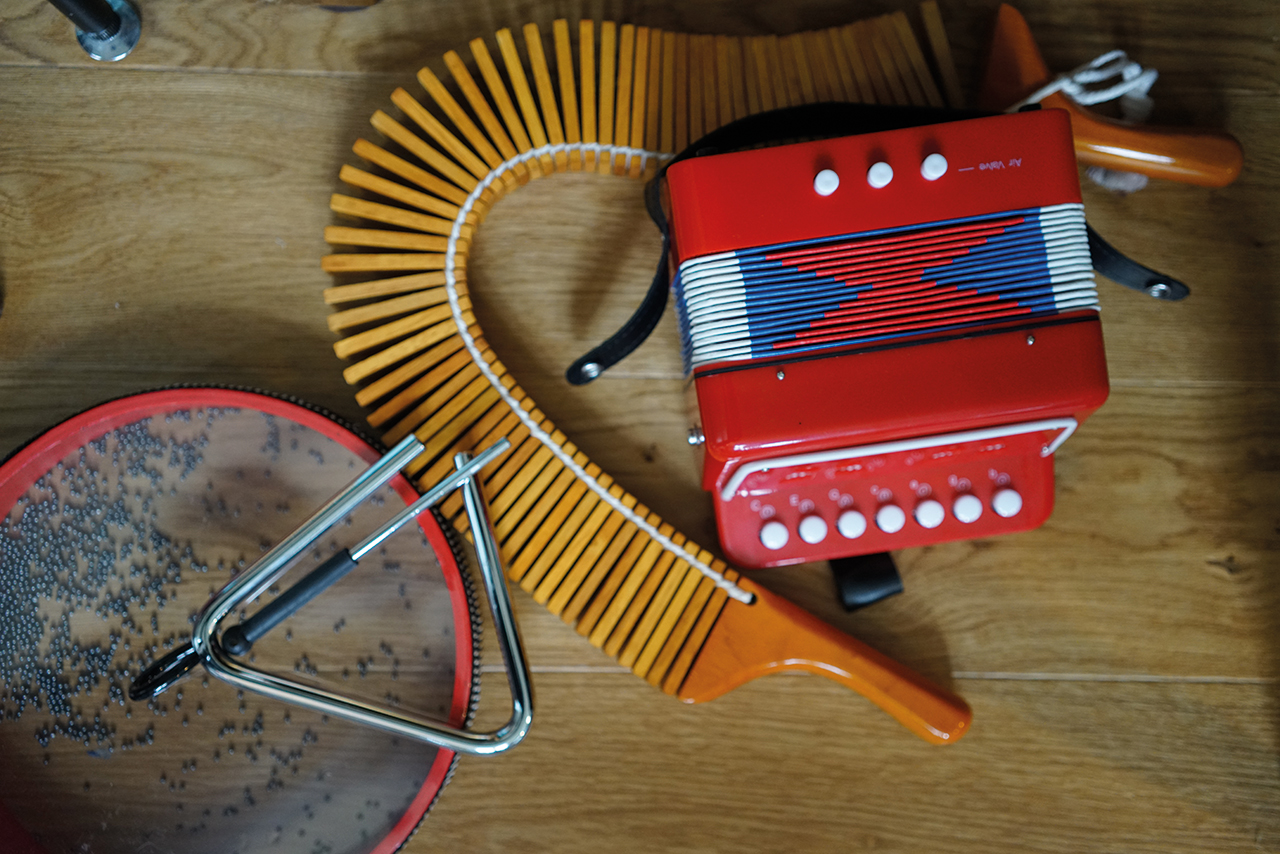 I started to play the violin at six, then the piano, but I never really engaged with learning instruments. I’d rather have worked on my own melodies. I decided to study sound technology at the Liverpool Institute for Performing Arts, housed in Paul McCartney’s old school, because I was really fascinated by The Beatles. I loved how albums such as Revolver were recorded. A big instrument was the recording studio itself.

After I graduated, I worked as a studio manager in Liverpool for 20 quid a day but I realised that what I wanted to do was write music. I didn’t get paid for however many years, and my girlfriend – now wife – and I stayed with her parents in Southport. My wife Jen is an illustrator and she got a job in London. So we came down penniless.

I got a job assisting in the National Theatre. It was really eye-opening. The show [I was working on] – Nation by Terry Pratchett – was a big flop but I had the most amazing, incredible time learning about how the band used the auditorium. I assisted on another couple of shows then, in 2010, I was offered a job at the small theatre at the back [the Dorfman Theatre, then the Cottesloe Theatre] after other people said no. I got it by default because I was hanging around. That show – Earthquakes in London by Rupert Gould – ended up doing well.

Later that year, I was asked to do Hamlet at the last minute. It wasn’t going to have music, then [artistic director] Sir Nicholas Hytner decided he wanted some. When Danny Boyle asked Underworld to score his production of Frankenstein in 2011, I was brought in to collaborate with them to translate their music into the theatre world. So that was my first big three shows.

It’s amazing what people see. People who came to see Frankenstein got me my first film job. The xx saw me working with Underworld and asked me to rearrange their music for a live gig with the BBC Philharmonic Orchestra for BBC Radio 1.

It was through The xx that I got my first ad job. Ray [Shaughnessy] and Dan [Norris] at Wieden & Kennedy were really struggling with a Lurpak ad. They’d asked so many composers; some high-profile names. We recorded at Abbey Road Studios. I’ve worked with Ray and Dan a lot since then. They gave me my big break in advertising.

In theatre and film, the composer is brought in right at the beginning. In advertising, it’s often the last thing people think of. Once the ad is done they pick up the phone and get 50 people to do a treatment. If there’s a problem, the cheapest, easiest thing to do is get rid of the music. But I don’t know whether Mozart could do it in one. It’s so unprecious – chucked on and chucked off. People don’t realise how long it takes.

It seems people are starting to change. For the BBC World Cup spot I was brought in before the film. Once BBC Creative had decided I was doing it, that was it. If you’re the only one, you are really invested in it. It’s not that you work harder, you’re just not worried that, if they don’t like your version, they’ll find someone else. It was so awe-inspiring working with so many designers and CGI artists.

Ads have been some of my most creatively fulfilling jobs ever. For the BBC Two idents, I said: "Music won’t work. Let’s create an environment that’s half music and half sound." Sound effects that sound like instruments; instruments that sound like sound effects. I build soundscapes. That’s what I love doing. They speak to lots of places.

This year I did the film Nureyev with [BMB chairman] Trevor Beattie – one of the loveliest people ever. I’m working with the same team on [the score for] a dance-based version of A Christmas Carol, with Carey Mulligan and Andy Serkis voicing parts.

I’m also going back to my grandparents and how they inspired my musical life. I have been starting to write an album to tell their story. Since I’ve had children, I’ve looked at my history and parents and grandparents, when and how they came together. It makes me feel lucky – what hardship people had to go through. We can have the world.

Alex Baranowski is a composer, arranger and sound designer. He is currently working on the music for a film version of A Christmas Carol as well as his first album. This year, BBC Creative worked with Baranowski on several campaigns including Christmas and its revamp of BBC Two. His advertising credits include H&M’s 2016 Christmas ad, directed by Wes Anderson. Baranowski started his career at the National Theatre.

This is me: Floria Sigismondi's mix of classical and modern