As boycotts mount, the state's only nationally known agency is putting its ad smarts to good use

In the weeks since North Carolina passed a bill eliminating LGBT bias protections and requiring transgender people to use bathrooms corresponding to their birth gender, the country has watched, fascinated, as everyone from Bruce Springsteen to Cirque De Soleil to PayPal have canceled plans to do business in the state.

For Brad Brinegar, the issue hits a bit closer to home. As the chairman and chief executive of McKinney, the only nationally known creative agency in the state, he has been waging a campaign to kill the bill since it was proposed in the state legislature.

"In a modern word, the best clients and best people care about diversity and inclusion," he said. "So if you look at all of the economic activity that has ground to a halt, it’s clear this bill stands in the way of people’s interest in doing business in North Carolina."

So far, Brinegar has spoken against the bill on CNN and was a driving force behind the letter signed by 103 national CEOs (including Marc Zuckerberg and Jack Dorsey) that demanded the bill be repealed. 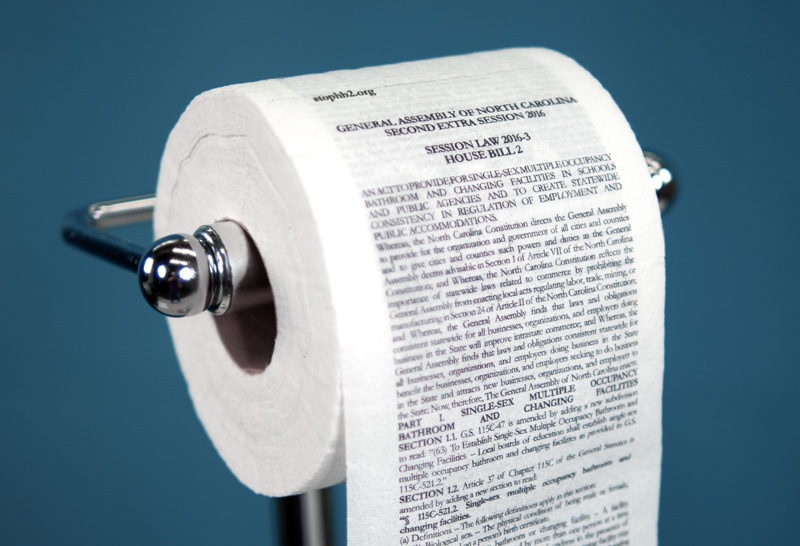 The agency’s latest anti-HB2 salvo shows what happens when you get on the wrong side of a creative agency. McKinney printed the bill on rolls of toilet paper, which it then sent to media outlets around the country. "We think it’s time to flush North Carolina’s House Bill 2 (HB2), and we think you probably agree with us," read an accompanying note. So far, Huffington Post, the News & Observer, the Drum and others have written about it.

Brinegar says no clients have yet approached him about the bill. But several potential employees, "one of whom was very outspokenly concerned about the issue," have expressed reservations about coming to work at a North Carolina agency.

"It’s really too early" to tell what the real fallout for the agency will be, he said. But the potential is significant. About 80% of McKinney's employees come from outside North Carolina, he said, and 100% of its business is based out-of-state. "It’s a very competitive world. All things being equal, if there is a factor that gives someone cause not to choose an agency, it doesn’t help."

Still, Brinegar says he and McKinney need to tread carefully. "We have to walk a fine line between being a business and a political organization," he said.

Nonetheless, "I have no doubt it could be a significant factor in new business and certainly a factor in attracting quality talent," he said. "That’s why we’re putting so much effort into making the repeal happen."

There's no such thing as gay blood, says campaign from FCB Health

How to master the art of the hybrid creative

If you are sexually harassed at work