Rumours. We’re all drawn to them. We’re social creatures and they are a source of social capital. They make us look and feel in the know and connected.

For rumours to work, they need to be based on a shared reference point. Public figures fit the bill nicely. As do big brands – and brands don’t come much bigger than McDonald’s.

The most powerful rumours are also a reflection of broader concerns. We care about what we eat; putting something in your mouth is a pretty intimate act. And, of course, McDonald’s is a food business. So, it’s no surprise that McDonald’s has long been the subject of rumours about the quality of its food.

However, the brand had never felt the need to respond until the mid-noughties, when it found itself cast as the villain of the food industry.

The business made substantial changes, not least to its supply chain, which led to it winning several RSPCA Good Business Awards.

For the first time, advertising set out to address food-quality perceptions. McDonald’s 2009 TV ad "Big nothing" was typical of our approach.

We wrapped compelling food facts in an emotionally engaging execution. An idealised world of kids on a farm, tracing zero-shaped objects, helped land a simple message: "Nothing. Zero. That’s what’s added to our burgers. There’s simply 100% beef from British and Irish farms. Seasoned with a touch of salt and pepper."

The approach proved successful, and played its part in returning the brand and business to health. However, by the start of the next decade, the rumours started to gain renewed potency.

The age of misinformation

The catalyst? That familiar disruptive force – the internet. Rumours and myths that, previously, had been confined to the playground, water-cooler and pub had a new home within social media.

These environments proved a powerful incubator and propagator of undesirable viral effects, thanks to a set of mutually reinforcing factors.

Many online publishers rely on advertising revenue. This has driven the emergence of "clickbait" – sensationalist headlines within social media designed to drive clicks and visits, creating the following backdrop:

Rumours are indistinguishable from reality. When myths sit alongside legitimate journalism in newsfeeds, and wear similar clothing, it is hard to sort fact from fiction.

Permanence. Once they find a digital home, rumours have a permanent presence that means they are more liable to resurface.

At that time, the terms "fake news" and "alternative facts" had yet to be coined, but that’s exactly what we were dealing with.

A growing threat to the business

So how was McDonald’s faring in this new environment? You guessed it. Not so well. It remained a conveniently prominent lightning rod for slanders and slurs, and the brand was being struck from all angles.

Fake Twitter accounts for members of the band One Direction were tweeting about cancer-causing "pink slime". Meanwhile, clickbait sites were doing their worst, and millions upon millions of people were watching YouTube videos based on these false claims, and consumers were merrily sharing the misinformation.

Not surprisingly, consumer perceptions of McDonald’s food quality started to decline at an alarming rate (see graph, below). This was a major concern for McDonald’s long-term business performance. Modelling had repeatedly shown the intimate relationship between food-quality perceptions, footfall and revenue. 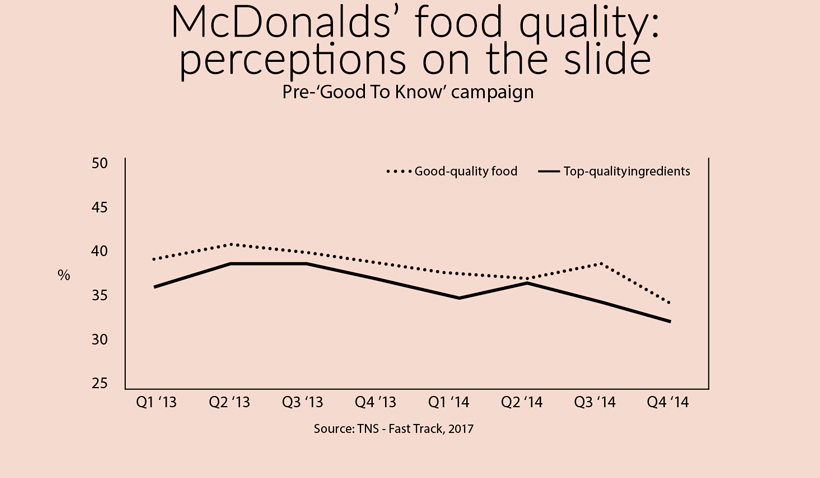 Acting on the problem

Qualitative research and social listening pointed us toward the root of the problem – a knowledge vacuum.

Advertising had done a good job of reassuring people that McDonald’s food originated from wholesome farms. And they knew from experience that they liked what they ate at the other end of the chain. What happened in the middle was something of a mystery. Rumour thrives in an information vacuum.

Our initial instinct was to fill the void by once more concentrating on delivering the facts about McDonald’s food in an emotionally engaging manner.

However, this "idealised world" approach was no longer capable of reassuring people. The consumers we spoke to in research were left wondering what we were hiding behind this advertising veneer.

So the next avenue we explored was to ditch the advertising gloss and get real. We pursued approaches that held transparency as their watchword, unveiling the industry-leading supply chain process for all to see.

The challenge here was twofold: the reality of industrialised food production was rather unpalatable, and people still felt as if we were ignoring the myths that they were hearing.

At this point, we broached with McDonald’s the prospect of acknowledging myths in advertising. From all our time spent listening to customers we believed that, unless we did so, doubts would always linger in their minds.

There was understandable nervousness in all quarters. After all, we would be giving these rumours hitherto undreamed-of reach, exposing them to many who might not have heard them before.

To its credit, McDonald’s agreed to explore the potential of this approach.

Our first attempt was to model the journey of enlightenment that we wanted all doubters to embark on. We developed a campaign that would feature real people who had tweeted a myth, and whom we would then follow as they discovered for themselves the reassuring truth about the quality of McDonald’s food.

However, this approach fell short. People felt that we were focusing only on tackling myths for which we had a good answer.

And, equally importantly, while our strategy set pulses racing at client and agency, the output left consumers cold by comparison. The truth simply wasn’t as interesting as the alternative facts. 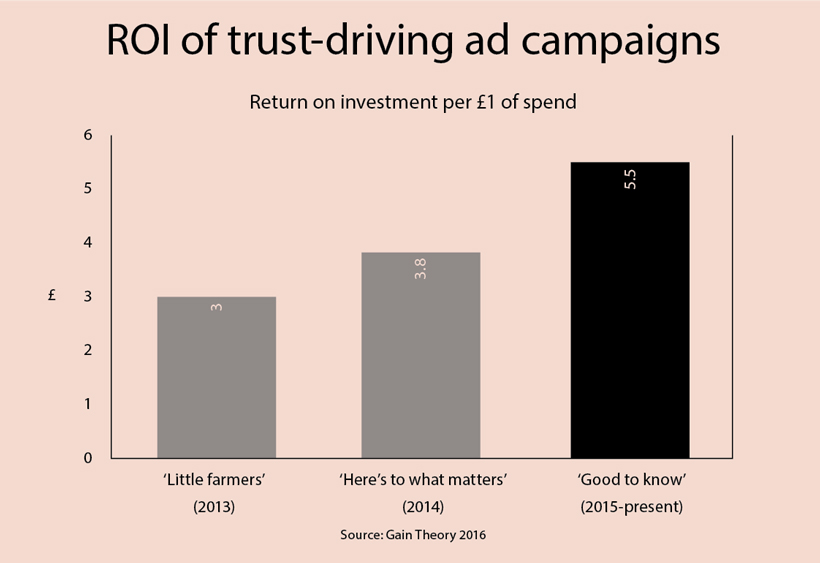 We faced a real challenge. We needed not only to tackle specific myths that were proving damaging, but also to address myths in general. Moreover, we had to be more interesting than myths that had often been designed for maximum intrigue.

In desperation, we scoured other fields of the arts that had tackled societal issues in previous eras, and hit upon a timeless tool – satire. Satire promised a combination of effects that made it particularly appealing. It holds up a mirror to society. It pokes fun to provoke reflection.

The mimicry and exaggeration that characterise much satire have a powerful dual effect. They shine a light on the behaviours the satirist wishes to address, while creating humour that makes otherwise uncomfortable scrutiny bearable – and even enjoyable.

Satire, then, seemed it might offer us a way to challenge both the myths themselves and those who believed and disseminated them.

We wanted to find a way to poke fun at the emerging culture of rumour and fake news and all who are drawn in by it.

So we set out to fight the fires of rumour that blazed around the brand with satire.

We explored a range of creative approaches to satire before we alighted on one that balanced humour and bite. The sweet spot in execution was a whimsical, tongue-in-cheek world.

We used social listening to identify the most persistent and damaging myths. These centred on McDonald’s core menu items of beef, chicken, eggs and fries.

We then took some of the most sensational myths, such as deformed cows, nasty bits of chicken, plastic eggs, and fries made of anything other than potato, and lavished upon them the love, care and craft normally reserved in advertising for the most cherished brand benefits. Charming, playful visual techniques included Plasticine animation and the cute illustrations of a child.

In addition, we gently and affectionately poked fun at the people who were accepting and sharing these rumours.

These entertaining executions, to which we could all relate, raised a smile and showed these rumours and rumour-mongers for what they were – really rather silly.

We also created content using independent voices. Working with the agency Blue Rubicon, we looked to infiltrate the online world that rumours and myths inhabit. We allowed larger-than-life YouTube personalities access to McDonald’s farms, factories and restaurant kitchens to find out for themselves how it makes and prepares its food. Having these vloggers stamp their own style on the content they posted about this on their channels gave the messages even greater credibility.

She adds: "Tackling deeply ingrained myths head-on is a tricky business, you don’t want to come across as too defensive or seeming like you really do have something to hide."

Results: the risk that paid off

We had found an approach that worked. It allowed us not only to tackle specific myths, but also make people stop and consider their response to myths in general.

So, the next time they were exposed to one, whatever it might be, they would pause and take a moment to think before believing or sharing it.

Communications tackled both specific myths and quality perceptions in general.

There is a wealth of information to suggest that our broadcast communications worked as intended. Not only did they deliver their specific ingredient messages well, but they also had a positive effect on sentiment measures, with more consumers agreeing with statements such as "McDonald’s has good-quality food", and "McDonald’s is a brand I trust" (see graphs, above).

This was supported by post-campaign, qualitative research that found the approach alleviated customers’ concerns for the first time. Consumers also commended us for leading the market by revealing more about McDonald’s food processes ("McDonald’s ‘Good to know’ campaign development, research debrief", Davies McKerr, 2016).

The same research showed that the openness and transparency of the vlogger content was effective in positively shifting trust perceptions. It spoke volumes about the confidence and integrity of the brand to give the vloggers the freedom to scrutinise the facts and divulge unknown information. As expected, this approach was particularly effective for convincing our more cynical consumers, according to the Davies McKerr research.

This was supported by increased quality perceptions of McDonald’s two main ingredients, beef and chicken, both of which achieved a 4%-5% year-on-year increase for this metric, according to Fast Track’s monthly brand tracking in 2016.

Econometrics demonstrated a strong contribution to the business’ bottom line.

Not only were the communications effective, but they were extremely efficient. For every £1 invested, the campaign returned £5.50 (after isolating the effect of communications).

This represents a significant increase from previous trust-driving campaigns – up 45% on the campaign that preceded "Good to know", which was particularly impressive, considering a backdrop of media inflation.

The risks we had taken had paid off. Fortune does indeed favour the brave.