The retail guru, founder and chief creative officer of Portas is on a mission to eliminate alpha culture within workplaces and bring creativity and collaboration to the forefront of business.

The window of Mary Portas’ communications agency on Emerald Street, London, is emblazoned with a big, brightly coloured manifesto that also serves as the title of her latest book: "Work like a woman." It’s an audacious headline that some people, including her daughter, warned her against.

"She said be careful, this isn’t just for women and you don’t want it to be anti-men," Portas recalls. "But, in the end, I thought: I want this to be bold because the only way we can make change happen is by being bold. And the only way you can do that is by pushing all the way out."

Portas, a retail consultant, author, broadcaster and agency founder, has set out on a mission to change the way we work. Following the release of her book late last year, she is rallying businesses to get behind her vision. Although there may be some who bristle at the suggestion to overhaul centuries of work culture, she is not worried about causing offence: "If I offend people, it’s probably going to be those who feel slightly threatened."

With Brexit looming and the marketplace shifting rapidly, many traditional businesses do seem under threat – not least retail and marketing, the industries in which Portas has spent her entire career. Yet she is convinced that if the ideas outlined in her book are embraced, the future doesn’t have to be doom and gloom.

First, what does it mean to "work like a woman"? Portas says it is about eliminating alpha culture in the workplace and embracing qualities that have historically been seen as "female".

"This isn’t just about changing some of your company’s offers, like maternity leave. This is about culturally shifting the premise of the values that we hold within business," she explains. "This could be called ‘Work like a decent human being’, really. What I’m trying to put back into business is fairness, kindness, collaboration and values that historically have not been recognised within businesses."

Portas is quick to clarify that this message is not aimed at one particular gender: "This isn't about male or female. Females have taken on alpha culture and behaved appallingly, and there are men within alpha culture who don’t want to work like that." 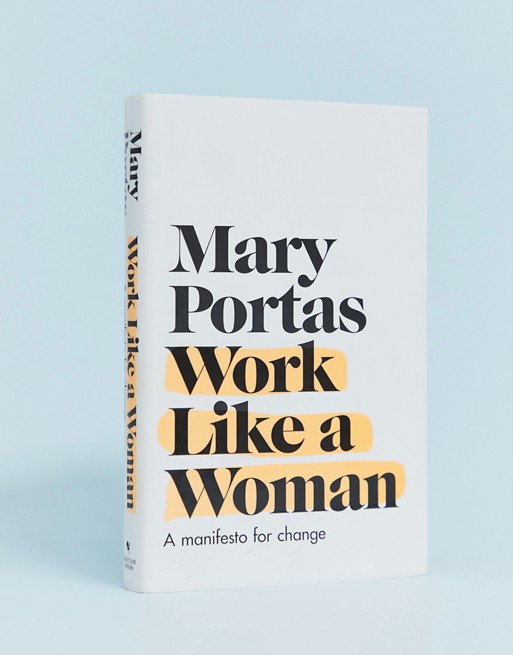 The marketing campaign for her book uses the phrase "Don’t man up", because "this is about young men too, and young boys told to man up is basically saying don’t show your emotion. And that is what we need to show", Portas adds.

In the wake of movements such as #MeToo and efforts to close the gender pay gap, Portas’ manifesto couldn’t be more timely. During her book tour, she says she has been "overwhelmed" by the response of readers, particularly young women who are "crying out for advice and guidance".

But change isn’t going to happen overnight. Many large corporations are taking these ideas into account by re-examining the services they offer, but few are diving "deep into their roots", Portas points out. She applauds those who have taken a long-term view to transformation, such as H&M, which has set a goal to use 100% recycled or other sustainably sourced materials by 2030.

"They know the end goal. They know consumers will be demanding it, but also they have a responsibility to lead the change to what is good and right," Portas says of the brand. "Short term, will their margins be the same? Probably not. But they’re looking at the long term. We should be looking at culture in business in the same way."

There is also more of a chance to start from scratch with new kinds of workplace cultures, because entrepreneurship is growing in the UK. According to a LinkedIn survey of UK members between 2016 and 2017, the biggest businesses are seeing the largest reductions in the size of their workforces, while entrepreneurs, sole traders and small and medium-sized enterprises are on the rise.

"More people are starting up on their own, because the big corporate systems are letting them down," Portas says. "So this [change in culture] can shift quite quickly."

Portas is optimistic about the retail sector’s future precisely because of the new players entering the space. She believes established retailers are suffering because "they’re working to the same format that they always have".

"They’re frightened of what the future is," Portas says. "Therefore they’re hanging on to the old rules. And the new players are coming in who don’t even know those rules – so they’re not bogged down by them – and creating what the future is. That’s exciting."

A return to creativity

One thing many of these new competitors share in common, and in line with Portas’ "Work like a woman" ethos, is a focus on creativity. She points to the example of Coal Drops Yard, the recently launched shopping and restaurant district in London that is centred on innovative design.

In fact, Thomas Heatherwick, the designer behind Coal Drops Yard, previously collaborated with Portas when she was creative director at Harvey Nichols in the 1990s. Heatherwick made an abstract artwork for Harvey Nichols’ windows that won a D&AD Pencil in 1998. That commission was part of Portas’ maverick experiment to transform the department store into a buzzing, social destination.

"Harvey Nichols became such a destination because it was a cool place where things happened," Portas says. "Nobody said: 'I must go because it has the best range of Dolce & Gabbana.' People went because it had a bar, for example, and no department store put a bar on the floor."

To survive, today’s retailers may need to take a similar approach by asking how people socialise and connect now. "If we just say bricks-and-mortar retail is about more bloody stuff – give me a break, you ain’t gonna be here," Portas stresses. "How do we create these new destinations, these new anchors that are no longer just about stuff and product?"

Modern retail spaces must also build community because "humans are neurologically wired to connect", according to Portas. She imagines a future when shopping centres or derelict stores are transformed to include start-up offices, gyms, wellness studios or crèches. The emphasis will be on collaboration "between brands that you wouldn’t have dreamt would mix", she adds.

"When you go outside, it should be about connecting, interacting – the trivial things that make us human," Portas says. "I want the discovery, I want the joy, I want to maybe bring my friends with me and have a social experience as part of it."

In the past, that focus on connection may have been dismissed as a "woman’s" pursuit. But as the workplace revolution arrives, more businesses may discover that such principles are simply common sense.

Kindness can be commercial

Top marketing trends according to LinkedIn

Brands must rethink how they talk to women