NEW YORK: If you aren’t nervous at the start of a campaign, you aren’t pushing the envelope enough. That’s the motto of communications teams at Arby’s and M&M’s.

"Every great thing I have done in my life, whether it was proposing to my wife, picking what college I was going to, or picking my career choice, has made me nervous," Arby’s CMO Rob Lynch said at the 2016 PRWeek Conference in New York on Thursday. "If you aren’t nervous about a decision, you aren’t pushing it enough."

Instead of getting angry last year, Arby’s embraced repeated jabs from The Daily Show with Jon Stewart, something that Lynch said went against every single thing he learned in a former role as a brand manager at Procter & Gamble.

"We could have sent him a nasty letter and said, ‘Stop making fun of us,’ which wouldn’t have worked because we didn’t spend any advertising with the guy," Lynch recalled. "Instead, we sent the whole crew lunch and they sent us back a letter that said, ‘Thanks for lunch, the food was awesome.’"

Arby’s nice gesture didn’t solve the problem. Stewart kept making fun of the brand, and each time, it sent him and his crew lunch. When Stewart announced his retirement, Arby’s joined the conversation with a video highlighting the chain’s rocky relationship with the show.

"What we did went against everything I have learned about managing your brand and managing the media," Lynch said. "But in today’s world, we don’t manage our brand. The conversation happens out there. We can try to contain it and hold it, but we can’t control it."

Even a campaign that seems safe has the potential for major fallout. Berta de Pablos-Barbier, VP of marketing at Mars Chocolate North America, noted at the conference that the idea of celebrating M&M’s 75th anniversary this year was almost tossed aside by the company.

The concept made some executives at Mars nervous, she said. Creative agencies told Mars no one would care, and it would look like self-promotion. However, Weber Shandwick, which worked with M&M’s on the campaign, was bullish about the birthday’s marketing potential.

"When you are the number one chocolate brand in the world, everything you do is going to be looked at," said de Pablos-Barbier. "So we have to be careful and there is a lot of risk involved, because if you get it wrong, you get it wrong big time and it is very visible."

De Pablos-Barbier pushed the idea and made it into a reality. The campaign, which will run through the end of the year, has led to an 80% digital engagement increase for M&M’s and sales are up double digits, she said. 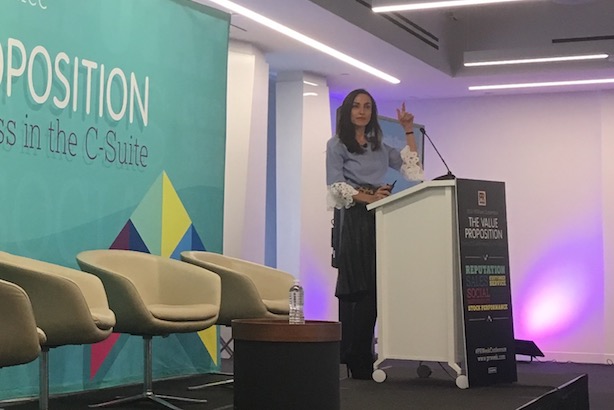 Arby’s took a similar approach in 2014 when it launched the slogan, "We have the meats."

"We wanted to tell people we have meat, so we came up with a tagline that said, ‘We have the meats,’" Lynch said dryly. "It is focused, not ambiguous; it is exactly what we put on our menu."

Brand apologies in the human era