Marketers have "held their nerve" in the face of an uncertain business climate following the UK's Brexit vote, according to the latest Bellwether Report by the IPA.

This is up from the 10.7% increased reported in Q2 and marks a fourth year of successive positive revisions. 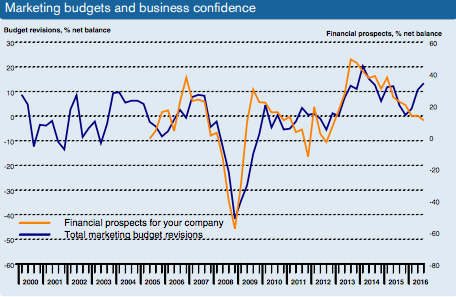 However, the uncertain economic and political climate since the UK’s decision to leave the European Union on 23 June has had a noticeable impact on financial prospects over Q3, the IPA said.

A net balance of -12.1% of marketers were pessimistic about their industry's financial prospects – the third quarter in a row of increasing gloom – down from -8.1% in Q2 and the lowest recorded figure by the survey since Q4 in 2012.

Those surveyed were more sanguine on their own company’s financial prospects during Q3, with 31% expressing optimism and a net balance of 10.6%. However, this is a less optimistic picture than the previous report in Q2, which posted a net balance of 13.7%.

Events enjoyed the strongest sub-category growth in Q3 2016 with a net balance of +9.9%, while internet budgets rose to 9.5% during the quarter. Direct marketing budgets were also revised up, recording a reading of +4.9%, the highest level for a year-and-a-half. 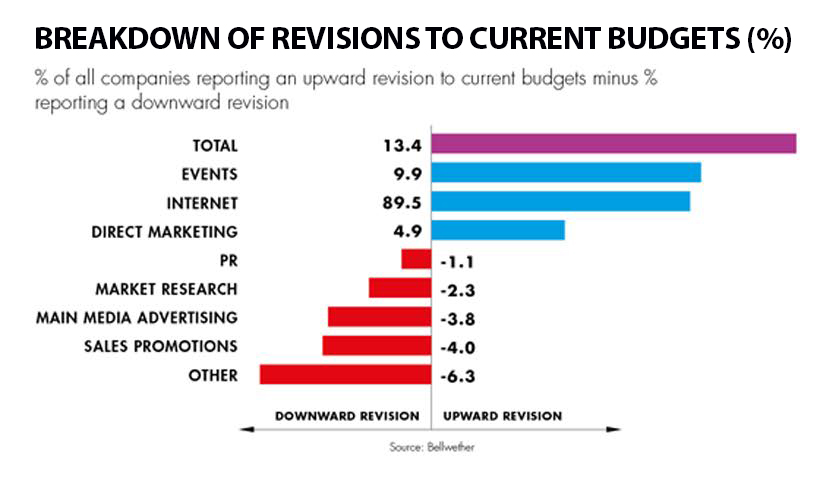 Paul Bainsfair, IPA’s director general, said: "With marketing budgets revised up to their highest degree in over two years, we can say that marketers have held their nerve in the face of Brexit uncertainty.

"It is also pleasing that in light of this, Bellwether is now predicting a positive forecast for adspend growth for 2016. As the negotiated terms of UK withdrawal from the EU will become clearer in 2017 Bellwether predicts a more challenging year. We are certainly living through interesting times."

Reasons to be cheerful despite Brexit