The former pollster and Burston-Marsteller CEO is building a new kind of holding company using digital-first agencies and disruptive technologies. Could his passion project upend the industry?

The digital revolution has left major brands unsatisfied, unsure if they’re getting the most out of their marketing dollars. It has opened the door for smaller entities that are unencumbered by legacy business structures and are empowered by disruptive technologies, firms that can create groundbreaking work and compete with established holding companies for lucrative business from blue-chip brands.

That’s Mark Penn’s view of the marketing landscape and the impetus behind The Stagwell Group, an evolving holding company he founded last summer. He sees Stagwell, officially an investment advisory firm, as the challenger brand to the WPPs and Omnicom Groups of the world. He believes he can build a more collaborative, nimbler group of agencies.

"Stagwell is the new kid on the block," he stresses during our interview in his K Street office in DC. "We are putting together a group of companies in the market­ing services area with leading-edge creativity, great analytics, and strong depth in digital."

There are self-implied dictates: No rosters of PR or marketing agencies doing virtually the same thing while competing against one another. Stagwell’s firms must be digitally driven. And agency CEOs must not look forward to retirement; rather, they must prove collaborative and work with sister shops in an era when household name brands seek their own version of cross-agency groups such as WPP’s Team Detroit.

The collaborative model
"The idea is to avoid situations that occur in holding companies," Penn says, "where you can have PR firms six deep all fighting for a single scrap of business. That doesn’t really create a model of cooperation. It creates a model of competition.

"We’re trying to create a collection of good firms that can work together and maintain their character and quality. There are more clients that will use a group of firms, and there is more of a common culture that will be created across the firms."

The former Burson-Marsteller CEO says he is eyeing three industries as specialty areas for Stagwell: the campaign-driven worlds of politics and entertainment, and finance. Its first three agency acquisitions fall in line with that strategy.

In October it bought SKDKnickerbocker, a power­house public affairs firm with politicos including Anita Dunn and Hilary Rosen who, like Penn, have roots in the Democratic Party and considerable experience with corporate and brand entities. A month later Stagwell agreed to acquire National Research Group, an analytics firm with offices in Los Angeles and London that works with Hollywood studios. And at the start of this year, it took a majority stake in New York–based Code and Theory, a digital creative firm with clients such as Burger King.

"Code and Theory is a good example of a digital-first agency," Penn explains. "It was born digital from start to finish." He then adds that SKDKnickerbocker is "a very strong firm with great leaders and one of the two or three go-to agencies here in Washington, DC."

The holding company, backed by former Microsoft chief executive Steve Ballmer for one, has hit benchmarks of 500 employees and $120 million in revenue. At its founding, the group raised $250 million in capital and had the capability of spending $750 million. Penn declined to speculate on whether he will sell the firm in the future or take it public. 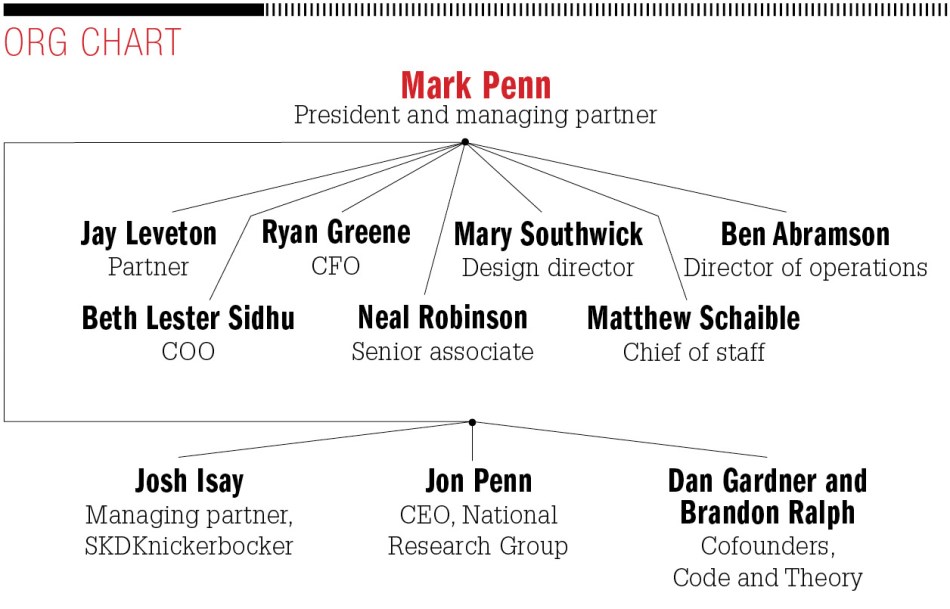 Assembling a new holding company
Penn made headlines in moving from Microsoft to Stagwell, but executives who have worked with him say that his moving into a role where he could build a company from the ground up came as no surprise.

"That’s his dream," says former business partner Mike Berland, now the CEO of DJE Holdings shop Edelman Berland. "When he was at Penn Schoen Berland, he was always building businesses. He learned a lot at WPP, watching it assemble companies."

Penn contends that Stagwell will be different from the big four holding companies — WPP, Omnicom, Publicis Groupe and Interpublic Group — in leader­ship experience, both at the holding company and agency levels. He touts his own experience as a campaign strategist, agency leader, polling shop founder, and Microsoft’s strategy chief. The "big holding companies are run primarily by accountants," he told The New York Times last October.

Penn stops short of saying the holding company model is broken, but explains Stagwell is looking for a more dynamic type of agency leader.

"It may be right for certain types of companies and we may be better for others," he says. "If you are a big, global, mature company and the owners and founders are looking forward to retirement, a holding company is probably the right thing. If you’re a creative company with young, ­energetic founders, we’re probably the right case."

Can Stagwell lure accounts from established agency networks? Observers say it’s unlikely the company will catch up with WPP or Omnicom in terms of sheer size anytime soon, but it could win campaign-driven business from clients willing to look past its relative lack of scale.

"In the tech world," notes Pivotal Research Group senior analyst Brian Wieser, "there are a lot of companies that raise capital against an idea, then build out a business to support it. Agencies tend to be very dependent on locking down revenue. You don’t build too far ahead, in part because you are operating basically as an outsourced extension of your client’s companies, until you’ve been able to build out your business and get confidence from a client that is willing to overlook the lack of scale. That gives you the opportunity to build something bigger."

Noting that Stagwell already has a star under its umbrella in SKDKnickerbocker, Penn says he could turn his attention to buying a consumer, healthcare, digital, or analytics shop or a firm focused on the U.S. Hispanic market. He contends that marketers are not reaching that demographic adequately.

"The Latino community is not being marketed to specifically enough," Penn notes, "there is [not] enough specific digital PR and communications, considering its growth over the past few years. We are going to look for agencies that can reach into those communities. If you look at the smartphone technology market, you will see Latino and African- American households are at the front of the line."

Though Penn has recently had the ear of CEO Satya Nadella and fellow Harvard alum Ballmer at Microsoft, he is best known for his work as a political strategist. His résumé includes some of the highest peaks — copies of the State of the Union and an inaugural address by President Bill Clinton hang on his office wall — but also stinging defeats.

Penn has advised leaders such as Clinton and UK Prime Minister Tony Blair during hard-fought campaigns, as well as Hillary Clinton’s initial run for the Senate. Yet he also took much of the blame after her defeat in the 2008 Democratic presidential primary.

It got personal in postmortems of that cam­paign.

Penn, its chief strategist, was accused of not under­standing the delegate process. Staffers protested his straightforward style in not-for-attribution quotes. As Clinton geared up for a second presidential run, with Penn officially on the sidelines, Mother Jones ran an article under the headline, "Hillary insiders say they won’t work for her if she hires this man."

The 2008 campaign had high and very low points for Penn, who continued to serve as Burson’s CEO. He masterminded the influential "3 a.m." ad, depicting Clinton as the best-qualified candidate to handle an unexpected crisis, which helped push her to victory in crucial primary states.

Yet in April that year, he resigned as her chief strategist after reports emerged he met with representatives from the Colombian government, a Burson client that was at odds with the campaign’s stance on a free trade issue.

Asked what he would do differently, Penn says he should have taken a leave of absence, but notes that WPP leadership didn’t want him to step aside.

"[The Colombia issue] came and went and didn’t have any impact," he contends. "In retrospect I would have taken a leave. There was too much confluence between clients at Burson and the political campaign."

Next up
Four years later Penn was widely reported to have helped Bill Clinton craft his blockbuster speech at the 2012 Democratic National Convention. And he advised Hillary Clinton in 2012 to consider resigning as Secretary of State after President Obama’s missile defense comments to former Russian President Dmitry Medvedev were caught on a hot mike and became public when the State Department released her personal email correspondence.

Although Penn says he was happy in the top role at Burson and not looking for wider responsibilities at WPP, he resigned in mid-2012 to join Microsoft and brought the edginess of campaign politics to the tech giant. While critics assailed its Scroogled campaign targeting Google’s data-collection practices, he contends the push is a model for other companies to straightforwardly take on competitors instead of doing so from behind the scenes.

"It raised some very important public issues around privacy. In fact, we got 250,000 people a day coming to the website, and it kicked up the dust it was supposed to," he says. "It’s an interesting model in terms of how you raise issues in the confines of commercial advertising and be very upfront about it."

Penn also helped Microsoft strike a less confrontational tone with its 2014 Super Bowl ad showing how its technology helps those with severe medical problems or handicaps, the first time he helped to craft a spot for the big game.

He isn’t swearing off campaign politics — "never say never," he says, while pointing out his focus is on building Stagwell. But don’t expect him to give up the role of strategist in favor of the traditional role of a holding company principal.

"I enjoy what I’m doing," he insists. "I enjoy marketing itself. Marketing to me, whether in politics or in general, is helping people be satisfied and learn about new products and things."

DDB's Sonal Dabral on starting your career, choosing an agency and staying curious

Is advertising creating culture or polluting it?

Is the creative of the future a computer?