Maltesers' work featuring disabled cast members was its most successful campaign in a decade, the brand's top UK marketer has revealed.

Having set a target of 4% sales growth, Oliver said Maltesers achieved an 8.1% uplift while the campaign was on air.

YouTube views for the launch ad, "New boyfriend", broke the two million barrier within the first 24 hours, more than double Maltesers’ one million target, while brand affinity was 20% – also double the brand’s target of 20%.

This, Oliver said, meant it was "the most successful campaign for an 80-year-old brand that we’ve had for over a decade. This has broken through all the barriers that we were facing".

"New boyfriend" launched in September 2016 during Channel 4’s Paralympic Games coverage. It opens with a familiar scene that could be lifted from an episode of US comedy Girls – a young woman tells two friends about having sex with her new boyfriend. Yet a couple of details are less familiar. The woman speaking is in an electric wheelchair and the awkward experience with her boyfriend that she describes was caused by a spasm, a symptom of her cerebral palsy. To illustrate her point, she spills a bag of Maltesers on to the table and the three women burst into laughter. 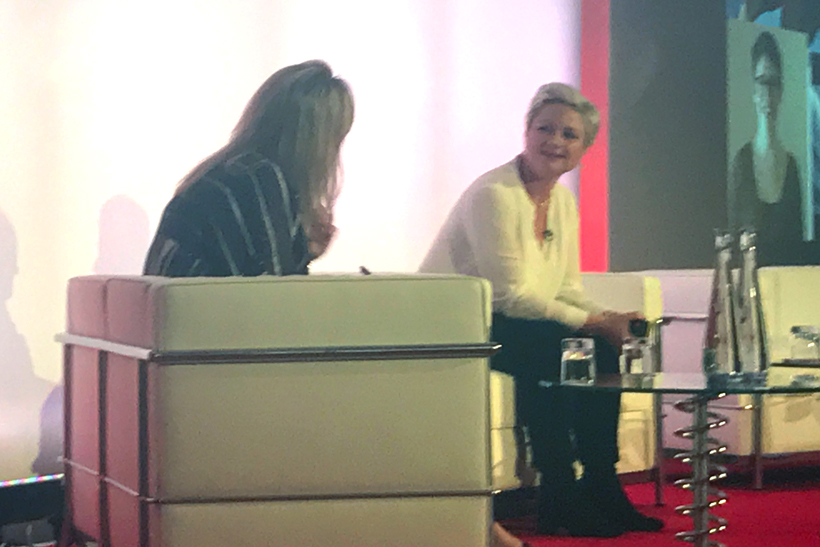 Oliver (above, right) told the Media360 conference in Brighton today that brands had a social responsibility and a business responsibility, which included a commitment to diversity in marketing.

"The industry spends £20bn a year on creating content that goes into people's screens at home and impact people's lives. With that voice comes an enormous responsibility to be inclusive and represent society in a really positive way," Oliver said. "We need creative that makes your brand the one that they’re going to choose. Diversity is what makes the best possible creative. Great ideas that cut through the clutter."

This spot is one of three Maltesers ads depicting people with disabilities, which were shown during Channel 4’s coverage of the opening ceremony of the Rio Paralympics' last night (7 September). The Mars brand and its ad agency Abbott Mead Vickers BBDO created them after winning a competition organised by Channel 4, which awarded £1m worth of airtime to the best campaign idea featuring disabled people.

Channel 4 launched the Superhumans Wanted competition in April as part of its Year of Disability initiative linked to the Paralympics. The broadcaster has championed the media representation of disability since the launch of its award-winning "Meet the superhumans" spot for the 2012 London Paralympics, which was followed this year with a TV ad featuring 140 disabled people.

Sales director Jonathan Allan said Channel 4 held the contest to encourage more advertisers to help improve perceptions of disability: "We would like to see the proportion of people with disability who are featured in advertising increase."

Oliver, who has been with Mars for more than 20 years, said diversity was on her agenda in the company’s communications when she was promoted to head UK marketing in 2015.

She acknowledged the controversial nature of the campaign, which was one of the Advertising Standards Authority’s most-complained about ads last year. The ASA did not uphold any of the 151 complaints it received, which mostly claimed it was offensive to disabled people or was overly sexual.

However, Oliver insisted: "It’s uncomfortable but you have to keep with it. It can be awkward talking about disability, casting disabled actors can be embarrassing and Scope helped us with that. It’s not easy but it’s worth it."

How adland should respond to Trump's inauguration

Maltesers unveils Braille billboard in next phase of disability campaign