Global ad expenditure will increase by 6.4% to $551bn (£416bn) this year - the fastest rate since 2010, according to Magna, the media research arm of Interpublic.

Small and medium-sized enterprises are driving growth in digital media while spending by traditional, big advertisers lags behind, according to the forecast, which was published today on the first day of Cannes Lions.

Vincent Letang, executive vice-president of global market intelligence, said: "Many brands in consumer packaged goods and automotive are freezing or cutting ad expenditure, which hurts the revenues of traditional media [owner] types while digital media, used by millions of small and local advertisers, seems to be immune from slow-down so far."

Industry observers say the changing market has implications for not only traditional media owners such as broadcasters and newspaper publishers but also agency groups because SMEs may be more likely to buy digital advertising themselves, rather than use an agency.

Interpublic has been one of the best-performing of the global agency groups so far in 2018, reporting 3.6% organic revenue growth in the first quarter, but that is still behind Magna’s forecast for global ad expenditure. 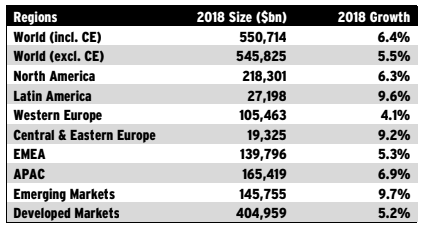 Magna said the Fifa World Cup and the US mid-term elections have helped to boost spending.

Meanwhile, Asia-Pacific is forecast to rise 6.9% and Latin America 9.6%.

Magna admitted the performance of the UK, which is set to generate a record £19.2bn in ad expenditure this year, was "counter-intuitive" when the economy is slowing. 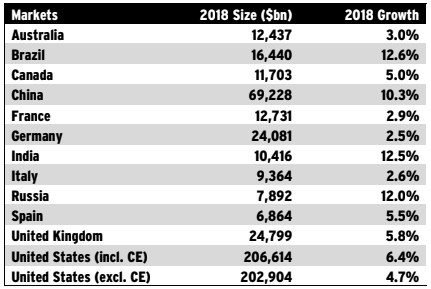 On the the UK, its forecast said: "the main reason behind the resilience of the ad market lies in the thousands of small, mid-sized, local advertisers who are increasingly using direct digital ad formats such a search and social", notably Google and Facebook.

It had a similar message as it said SMEs and ecommerce businesses are hiking digital spend, while FMCG giants are being more cautious.

Brian Wieser, analyst at Pivotal Research Group, said at the time of Interpublic’s first-quarter results in April that advertisers demanding greater transparency from the media supply chain and tightening up their contracts is having some "negative" effect on revenue growth for "all agency holding companies".