Campaign comes on back of #BLM.

Marks & Spencer is taking a strong stance around diversity and inclusion with the roll-out of a campaign for its new, multi-skin-tone lingerie range.

Created in-house, "Nothing neutral about it" is predominantly a customer campaign running in-store, but will also appear in paid media, across press and digital out-of-home.

The creative features pictures of models of differing skin tones, shape and size. Each model chose their own lingerie and even how they posed in the photography.

The imagery will appear across M&S various channels, including social and store signage.

M&S sells one of the broadest size ranges on the UK high street and has already produced more "inclusive" lingerie such as post-surgery bras.

Neutral, aka "nude", coloured bras and knickers have historically been produced in a single, typically light, shade of skin tone, but increasingly brands are looking to better reflect the diversity of skin tones of people from different ethnic backgrounds.

M&S' "new neutrals" are opaline, rich amber, rich quartz, rose quartz and topaz. The colours will appear on items such as M&S' T-shirt bras, its Rosie range and first-bra Angel. 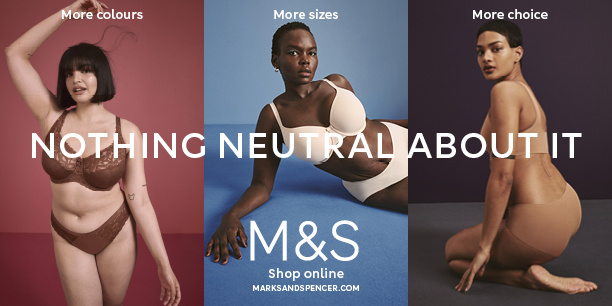 M&S said it decided to "redefine" its inclusive colours partly in response to Black Lives Matter and the murder of George Floyd, as well as on the back of customer feedback on industry standard colour names such as "tobacco". M&S' culture and heritage staff network was involved in the process in order to canvass employee opinion.

Laura Charles, director of M&S lingerie, said: "The global conversations around race and equality over the past 12 months spurred us to go faster in creating a better, more inclusive range.

"From the product offer to the names, to the marketing, we've worked hand in hand with our colleague culture and heritage network to deliver a campaign we're proud of and an underwear range that provides more colours, more sizes and more choice so that all of our customers have the freedom to complement or contrast."

Brands are increasingly making moves to better reflect skin tone in their products. Last February, Tesco became the first supermarket to launch a range of plasters for diverse skins tones – available in light, medium and dark.

Media was by Mindshare. Copywriting and art direction were handled by M&S's in-house creative team, which is led by Anthony Cassidy.

How brands can find strength through consumer unity amid disunity

In-housing is here to stay and growing

Is M&S right to drop its clothing and home Christmas TV campaign?

Should brands hold back on the blockbuster Christmas ad?