West Coast shop announced closure on Twitter in early hours of this morning.

M&C Saatchi has closed its Los Angeles office after 18 years amid the independent agency group’s financial woes and the global coronavirus pandemic.

The West Coast shop announced its closure on Twitter in the early hours of this morning (Friday), citing "the recent pandemic and economic certainty". 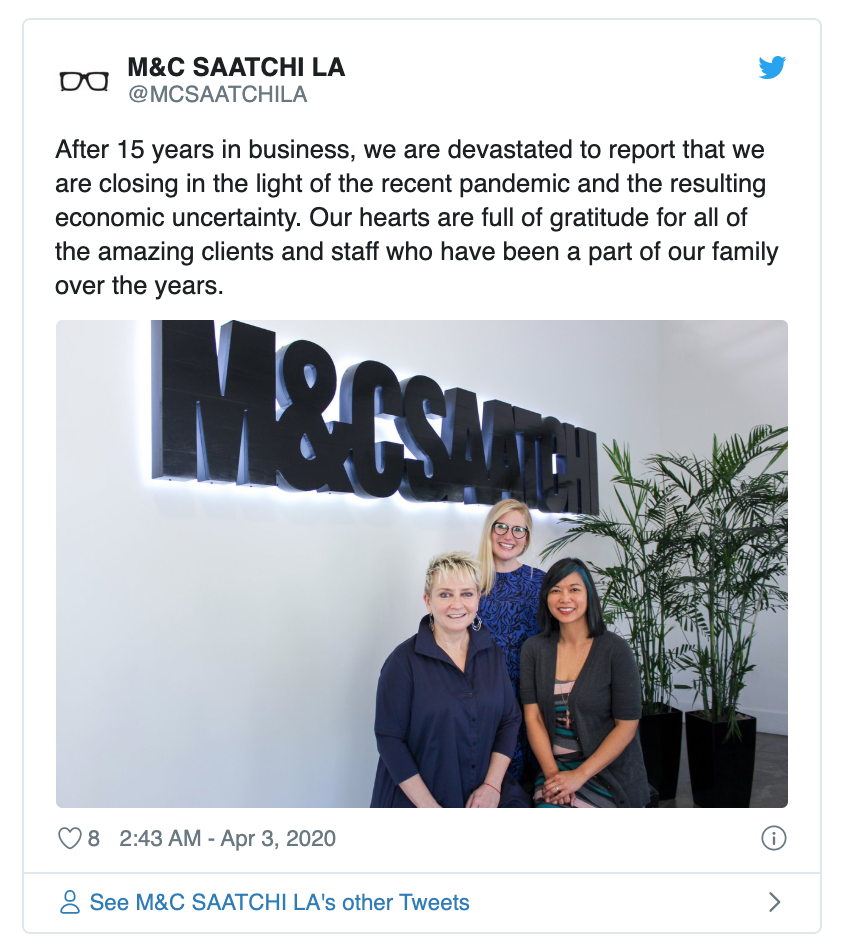 It did not mention, however, that M&C Saatchi is being formally investigated by the UK’s Financial Conduct Authority after an accountancy scandal was revealed in August 2019 involving an £11.6m "adjustment" over two years.

The company, which is listed on the London Stock Exchange, is trading at just over 30p a share this morning – down from almost £4 a year ago.

M&C Saatchi also described the LA office as having had a "poor first half" of 2019 in the company’s most recent financial disclosure. The LA branch had lost clients including Epson and Fox Restaurant Concepts, and this had a "material impact" on its results, but the agency had also won projects for Amazon Music and Origin Hotel.

Yesterday, the independent agency group confirmed a number of staff had either been furloughed or taken a pay cut, while there are also redundancy consultations that began before the coronavirus pandemic took hold around the world. The World Health Organization announced the pandemic on 11 March.

Since opening in 2002, Los Angeles was one of the first offices that the then seven-year-old M&C Saatchi launched outside the UK. In 2012, worldwide chief executive Moray MacLennan admitted that it was a mistake to assume the company’s US operations could be serviced out of LA instead of New York, where it had virtually no presence at the time.

Tomorrow we will be judged by our actions over coronavirus today

We don't save people's lives

How are creatives staying inspired during the lockdown?