Love Island sponsor Just Eat dropped its idents during the first airing of the show since the death of Caroline Flack, instead running a version urging people to #BeKind and to contact the Samaritans if they are facing mental-health issues.

The plainly coloured ident, created by ITV Creative, ran last night (17 February) during the broadcast of the reality show on ITV2. It read: "Talking and listening can help, whatever you’re going through. Call Samaritans on 116 123. Supported by Just Eat and ITV."

Reaction on social media has been largely positive, with one user sharing the ident and tweeting: "The only tweet that should blow up tonight #LoveIsland." 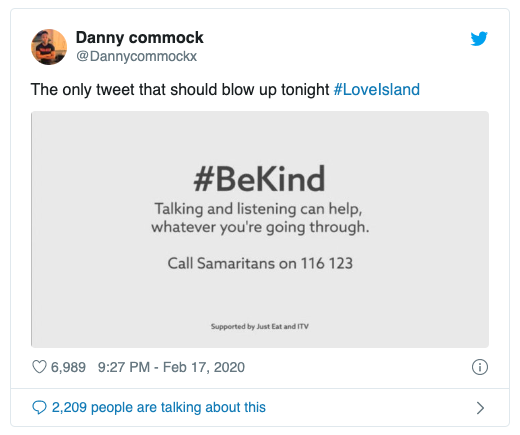 In a statement, ITV said: "In light of this weekend’s tragic events, Just Eat and ITV have worked with Samaritans to replace the idents for this evening’s episode of Love Island so that anyone affected by Caroline’s death can access support."

Love Island narrator Iain Stirling paid tribute to Flack on the show, saying: "You were a true friend to me." He also described her "warmth and infectious enthusiasm" and how she was "crucial" to the show’s success.

Flack died by suicide in her home on Saturday (15 February). She had stepped down as presenter of the show in December after she was charged with assault of her boyfriend.

Samaritans in the UK can be reached on samaritans.org or 116 123

7 ways to make the most of connected TV