Forest Road brewery is asking fans to take photos of BrewDog ad with its own beer obscuring Punk IPA.

A brewery in east London is aiming to play BrewDog at its own game with a guerrilla campaign that makes use of the Scottish craft beer giant’s advertising assets.

BrewDog last week launched what it called the "most honest ad ever", created by Uncommon Creative Studio – a series of variations on the word "Advert" in black letters on a white background, accompanied by a can of Punk IPA.

It followed a campaign created for the brand last year by Isobel in which Punk IPA was compared with popular lagers by their score on the website RateBeer. But these have marked a strategic shift for BrewDog, which previously pledged never to advertise.

Forest Road Brewing Co in Hackney spotted that the new ads could be easily commandeered for their own purposes by placing a bottle of its own beer, Work, in front of the Punk IPA can. 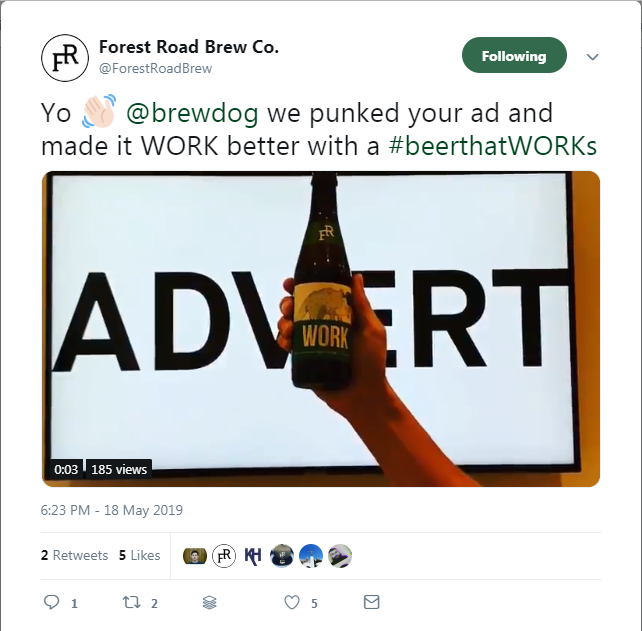 According to The Drinks Business, the brewery is asking fans to take their own pictures of hijacked BrewDog ads and share them on social media – and anyone who does so is entitled to a free beer at Forest Road’s tap room.

Meanwhile, the brewery's founder, Pete Brown has been in touch with BrewDog to ask for a list of advertising sites in London to facilitate his takeover. 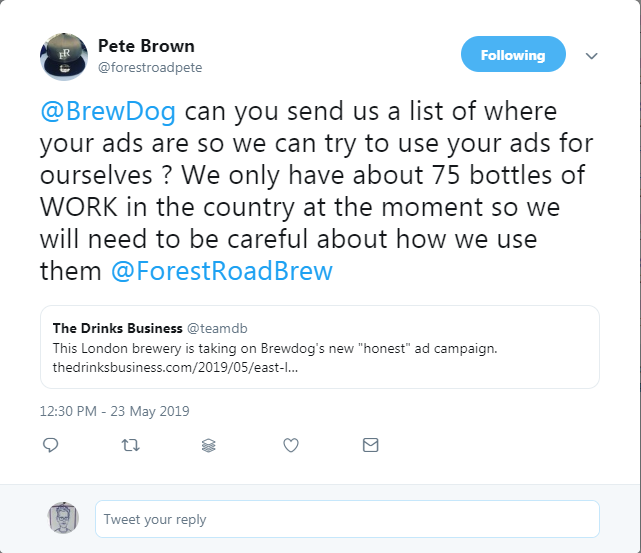 The idea came from creative studio Few & Far. Brown said Few & Far's founder, Aaron Howard, was a fan of the brewery and pitched the idea to him while visiting the tap room.

Forest Road's website contains a two-minute brand video that Brown said was the only previous occasion Forest Road had spent any money on marketing.

He said: "As much as we love that BrewDog are flying the flag for craft beer, the smaller, independent craft-beer breweries like us simply can’t afford to spend this sort of money on media.

"So we loved the fact that this idea means we can get our name out there for free, and hijacking the BrewDog ad with our beer is a fun way to do it."

Brown founded Forest Road in 2016. He was previously a brewer at Camden Town Brewery, but left after feeling that its drive to rapidly expand was affecting the quality of its products. Camden Town was later acquired by Anheuser-Busch InBev, the world's largest brewing company.

As well as brewing beer under its own brand, which is available in east and central London and a few areas in the south, Forest Road brews the Soho House beer, House Lager.

Should agencies do more to stand up to unreasonable client demands?