It takes on average 5.3 tweets to sell one ticket to an event, according to statistics revealed at Live Tech 2013.

Guests at the event also heard that three in five people spend more time on their electronic devices than with their other half.

Members of the event industry descended on the Hippodrome Casino in Leicester Square, London, to understand how technology can enhance the publicity, experience and sales of an event. 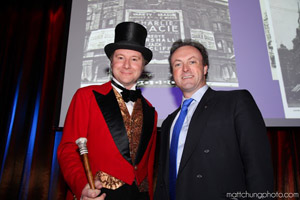 The day-long session at the former circus hosted speakers from the events industry and featured talks by the likes of Jon Ross of Social Fuel, who discussed the importance of social media pre- and post-event with his 100-strong audience.

Also on stage discussing technical innovations were David Ball of Brand Fuel and Tim Williams of Luma, who specialises in creating the high-tech personal touches for visitors at large-scale events.

In a first for London Launch, every guest was welcomed to the event with an iPad that contained books that included the speakers’ biographies and interactive displays that allowed visitors to ask questions as each talk went ahead.

Will Broome, chief executive of London Launch, said: "The downloaded content went down very smoothly. It was very slick, and a lot of people are a bit sheepish about asking silly questions so it enabled them to make comments as well as ask questions as the talk was going ahead, rather than storing them up until the end when they can seem a bit irrelevant. We were absolutely thrilled."

The day was attended by events managers from global companies such as Goldman Sachs, Price Waterhouse Coopers and Siemens, while attendance for the evening’s networking event saw nearly 300 people through the doors.