Creating a series of three original videos and working with influencers, social publisher The Hook led Facebook conversations for Lionsgate in the weeks ahead of the release of their film Jigsaw.

In October 2017, Lionsgate and horror movie franchise, Saw, wanted to "take back" Halloween for their first film in seven years - Jigsaw. Social publisher The Hook was tasked with building a campaign that drove awareness, engaged with fans and drove sales.

Rather than killing his victims outright, Jigsaw traps them in situations that he calls "tests" or "games" to suffer their will to live through physical or psychological torture. He believes if they survive, they will be rehabilitated. Kramer communicates with his test subjects by delivering recorded messages through the infamous Billy The Puppet. 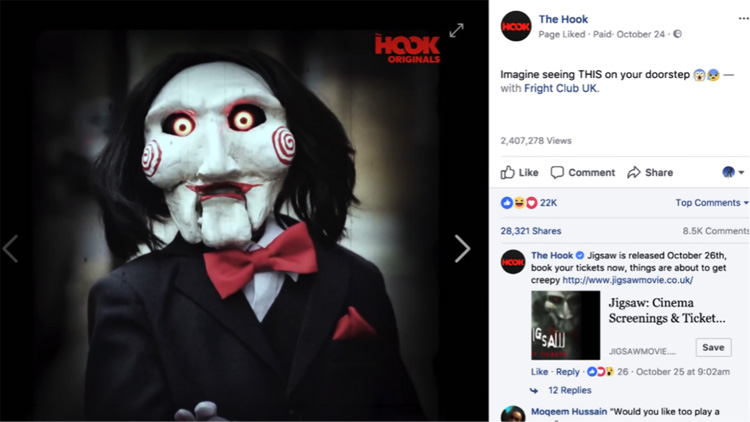 The team began working on their creatives and scripts and were able to secure sign off from the studios in the US for the services of both the official Billy The Puppet from the movie and Tobin Bell, the actor who plays him, and created three videos with them.

The Hook aimed to mirror the sentiment of Jigsaw in their branded content, to play on the plot of the movie and draw the right emotions from their fans to help scare, entertain and whip up anticipation for release. In short of creating a fully functional escape room just like in the movie, a series of prank ideas were put on the table resulting video content for the campaign.

The Hook also put together a special trailer push, which saw Tobin talking to "The Hook Followers".

And tapping into the reach of influencers, The Hook staged a VR stunt that terrified popular influencers Goubran Bahou of Goubtube and Jahanna James who were blindfolded and led to the vaults at Waterloo. These influencers were chosen both for their combined following of more than 3 million fans across several social platforms, as well as the theme of their channels – comedy sketches, pranks and reaction videos.

The Hook’s three videos clocked up a combined reach of 16.1 million with 5.2 million views, which is five times more views than target/minimum guaranteed and an engagement rate of 3.3%, smashing the industry average rate of 0.5-0.8%.

The campaign exceeded all expectations and was the top branded film content on YouTube and Facebook in the month of October 2017. In addition, it was the only UK and Film campaign to be in the Global Top 10 Branded Campaigns on both platforms in the week of 16-22 October.

Let's end the horror shows and start scaring ourselves

YouTube safety and the Logan Paul problem: Brands are facing an age of extremism

Harvey Nichols: five of the best ads by Adam & Eve/DDB

Why Deliveroo created an edible billboard of burgers