Created by Jam3, the bot responds using machine learning and image recognition, and eventually reveals a scene of the movie.

To promote the upcoming film "John Wick: Chapter 2," Lionsgate partnered with digital design and production company Jam3 to create a chatbot fans can interact with to get sneak peeks into the upcoming film.

"John Wick 2," the sequel to 2014’s "John Wick," stars Keanu Reeves and arrives in theaters on Feb. 10. The movie follows John Wick, an ex-hitman, who comes out of retirement (again) to defeat assassins. This time, Wick travels to Rome to help out a former associate whom he swore a blood oath to help.

The chatbot, which takes on the persona of an assassin with mysterious connections, uses machine learning and image recognition to guide users through the plot of the film. Eventually, users get to speak with John Wick himself and see an exclusive bonus scene from the movie.

Greg Bolton, creative director at Jam3, calls it a different take on a traditional movie trailer. "It’s a look at what’s to come, but in this case, it’s augmented with interactive dialogue and a few other technical tricks that we hope get people buzzing in new ways," he said in an email. "Any time a fan feels like they're part of a story, they're much more likely to seek out more info and have a positive experience."

To access the chatbot, users first text ‘WICK’ to 313131 or enter their phone numbers online. After opting in, the nameless assassin chatbot messages, "Accounts payable, can you confirm your name, please?" If a user doesn’t text back their name, the chatbot will continue asking three times before it moves on. "We really don’t have time for niceties today," texts the chatbot, "Your account’s on hold because you need to fulfill your oath." However, not all answers correspond to questions asked. For instance, in reply to "When do I go to Rome?" the chatbot assassin says, "I suppose I should be flattered, but no. Anything else?" 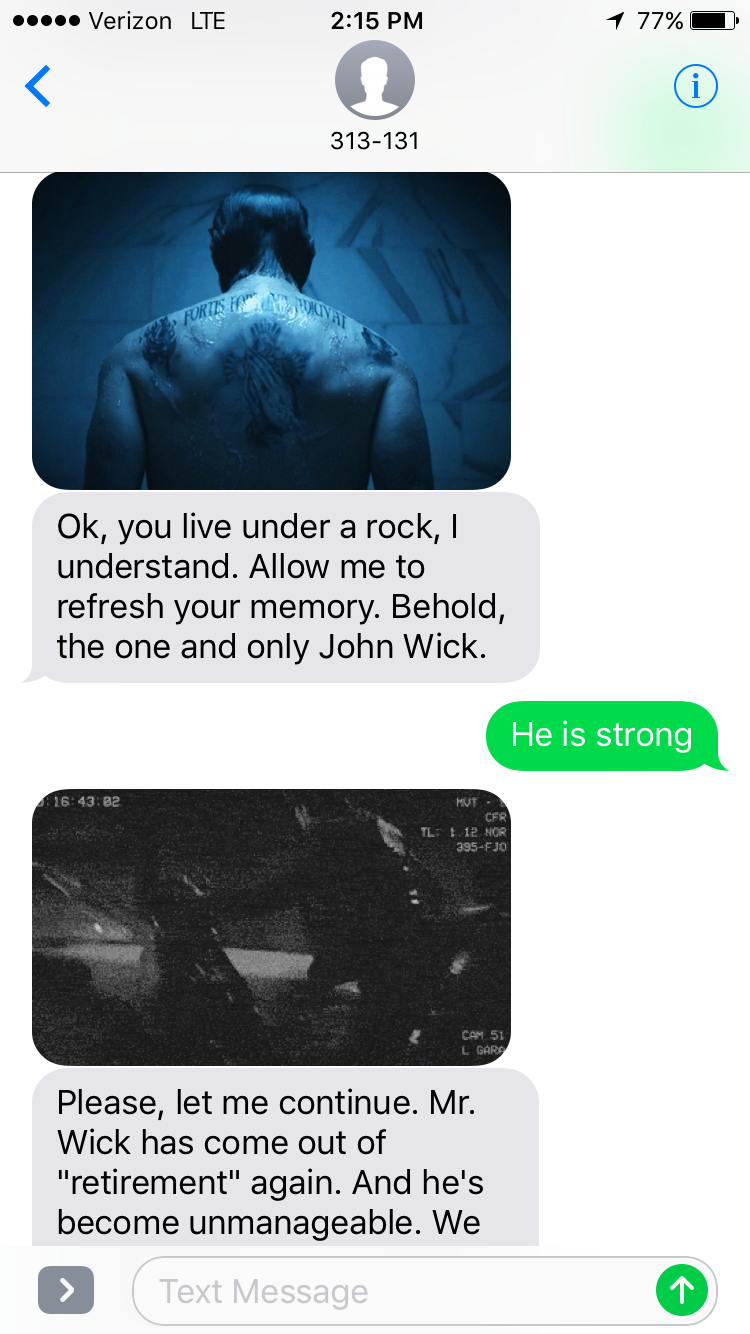 Elsewhere in the experience, the chatbot asks the user to submit a photo of themselves. Using image recognition, the bot analyzes what the user is wearing and comments on it. For instance, if the user is wearing glasses, the bot will bring them up in the conversation, mentioning to be careful not to get glass in their eyes when fighting breaks out. "It’s one of those little ‘how’d they know that?’ moments that makes an experience like this really come alive," said Bolton.

The entire experience takes place on a smartphone through texting, or SMS/MMS. Bolton said Jam3 chose to use SMS over another a messaging app like Facebook’s Messenger (a popular choice for chatbots) because it correlates to a scene in the film where an assassin contracts a hit on John Wick and contract killers receive details through a text message.

"Using SMS/MMS to let fans live that scene was an opportunity too perfect to pass up," said Bolton in an email. "Also, as fans of the first film may remember, there's sort of a neo-retro vibe in the world of the film. A familiar and widely used mechanism like SMS felt perfect."

How social media is killing your chatbot

This digital agency built a chatbot to recruit summer interns

Who will build the million dollar brand bot?