Studies have found that consumers are now spending more time with digital than with linear TV and, in the UK, mobile trumps TV.

Of this, time spent with online media will overtake time spent with linear TV for the first time. Online will have a 38% share, TV 37%, and the balance spread primarily across print and radio. 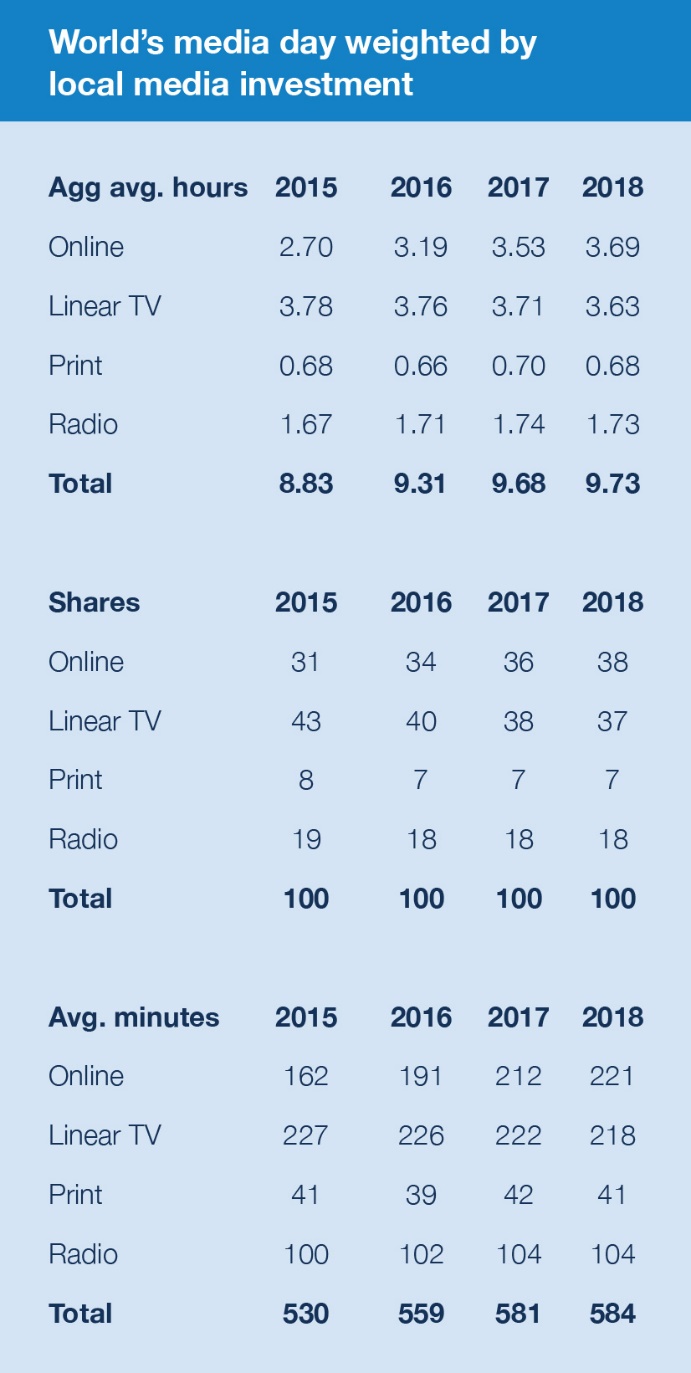 Mobile overtakes TV in the UK

A separate report by eMarketer, found that mobile will account for 32% of time spent with media by UK consumers this year – overtaking TV (30.8%) for the first time.

Overall, adults in the UK will spend half of their media time (averaging 9 hours, 23 minutes each day) with digital.

"The way that people consume media will continue to change," eMarketer’s UK analyst, Bill Fisher, said. "Many traditional habits are simply transitioning over to digital devices and platforms, while digital-only habits continue to proliferate. However, what’s apparent from this forecast is that UK adults have reached a plateau. While the media mix may ebb and flow, and it will increasingly flow toward mobile, adults’ media consumption capacity has reached its peak."

Group M also examined programmatic (automated) ad investment trends. On average across reporting countries, 44% of online display investment was transacted programmatically in 2017 versus 31% in 2016. This will rise to 47% in 2018.

The report’s writers have "scant evidence of practical application" of the technology within programmatic advertising.

"Blockchain’s main attraction is its distributed ledger which tells everyone everything and thus presents the opportunity to reduce inefficiency or cheating," Adam Smith, Group M’s futures director, added. "However, its Achilles’ heel is the need to keep every participating computer updated with everything all the time, and that’s too slow for a real-time world."

"Arguably, today’s most advanced marketing tools are the advanced algorithms helping brands analyse which creative or media placement is performing the best, at scale and speed," Smith, said. "Among many future applications, we expect AI to helpfully emerge in fighting fraud that evades conventional rules-based solutions."

Regarding marketer application of data to media investment, respondents cited ample room for improvement. Clients are increasingly aware of the value of owned/acquired data, but are often risk-averse to harvesting, storing and distributing it.

In many smaller countries, available data is poor. Most US clients are using first-party data to activate digital media, and they’ve frequently invested in enterprise data management platforms. Other markets are not so far along for varying reasons.

Because measurement of premium video audiences across platforms is woefully inadequate in every market, GroupM asked respondents to simply estimate the share of TV incumbents versus digital insurgents. Legacy TV players are believed to hold three-fourths of all video hours but less than a third (29%) of online video hours.

No look at the global digital landscape would be complete without acknowledging that Google and Facebook continue to be the key growth drivers. Google search is critical to clients, and YouTube is increasingly important for scaled, "premium" video.

Concerns over the quality of programmatic inventory in the Google Display Network persist, but remedies are being pursued. Facebook’s success is partly due to the delivery of younger audiences via Instagram.

"Automation and talent are the big themes in advertising’s current revolution," Kelly Clark, chief executive, Group M Global, said. "One of the downsides of specialisation is the increase in specialists who know more and more about less and less. We have to use automation to liberate brain-power, so talented people can look across the entire media ecosystem to help clients optimise short-term results and create long-term brand value."

Why Snapchat's next move could alienate Gen Z even more

With media, as with fruit cake, quality matters as much as quantity

Mark Read interview: WPP must focus more on clients and less on how we organise ourselves