The adults of today grew up in a time when hurling homophobic slurs on the playing fields wasn’t just tolerated — it was encouraged. Today’s schoolchildren, by contrast, have memorized every lyric in Macklemore and Ryan Lewis’s gay rights hip-hop anthem, "Same Love."

And they sang along and cried along when the duo performed on the Grammys just before Queen Latifa, by the power invested in her by the state of rap royalty, performed a mass gay wedding.

It was a beautiful vision.

Only the world is a lot more complicated than that.

"Same Love" was the moment when the mainstreaming of gay culture became unstoppable, when it became clear that America once again is moving a culture from the margin to the mainstream.

The mainstreaming of minority cultures is hardly new. Our society has been steadily moving from oppression to appropriation to acceptance since the dawn of the suffragettes and the beginning of the civil-rights movement.

Consider the profound influence Black culture has had on America, in politics, literature, entertainment, scholarship, business, sports, and every other human endeavor.

But we didn’t exactly celebrate that in the past. In the first half of the 20th century, racist ads were epidemic in our industry. Eventually Madison Avenue figured out that non-whites were people, too. Wait, scratch that. They figured out that they were consumers!

The ad biz responded, producing highly targeted spots going after Blacks, Hispanics, and Asians. They were, to modern eyes, cringe-worthy, but they were a start.

Around about 1969 — the year of Woodstock, Jimi Hendrix, the Summer of Love, and the Vietnam War — something started to change. 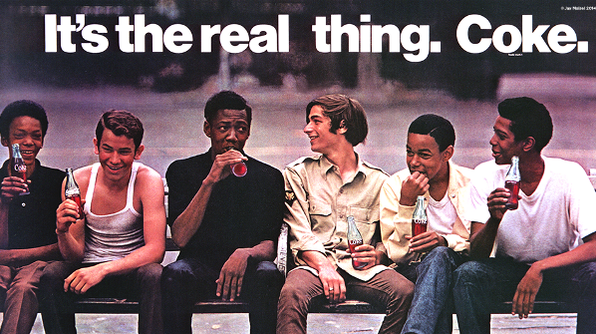 This, the famous Coke "Bench" ad, is the beginning of integration in advertising. I’ll hazard a guess that you have no idea what makes this ad revolutionary. After all, it’s just a bunch of guys sitting on a bench drinking Coke. Look again. Whites and Blacks are together in the ad. No, not just together. Intermingled.

Of course, race is visible, but how would we know if one of those guys was gay? Gays and straights, after all, have been intermingled for all of human history, hidden in the shadows.

But no hiding place is perfect, and we’ve been granted glimpses of gay culture for far longer than we may realize.

Kapow! Batman and Robin were living as a couple under our noses, as this panel from a 1954 comic makes plain.

Or get an eyeful of this ad for Cannon Towels. 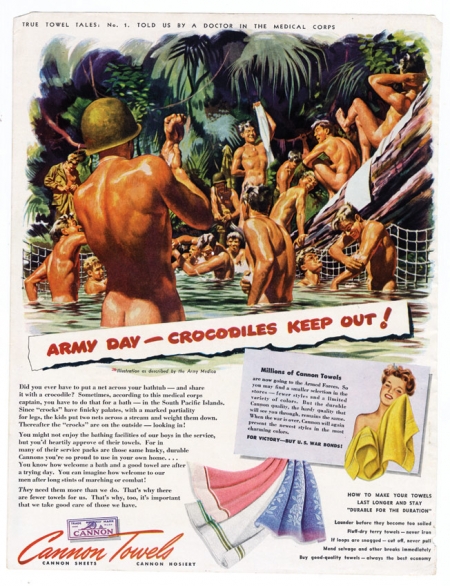 Ads like this seem so frankly homoerotic to our eyes today, but ideas of sexual identity were more fluid then. It was an innocent time where people didn’t discuss things as they do now. As an ad it doesn’t work, but as an example of what was called "gay window dressing," it was perfect.

Things were changing, however. In 1950, President Eisenhower signed a federal order criminalizing homosexual behavior. LGBT individuals were, in essence, outlawed.

The LGBT community started to fight back.

Driven by persecution, LGBT identity became stronger, more defined. Culture followed, becoming much more homoaware, even as the Lavender Scare drove advertising firmly back into the closet. Homosexual imagery didn’t start reappearing in advertising until the 80s. And then came the AIDS crisis.

For once, advertising didn’t mirror the culture of fear and hate that pervaded at the time. Advertising helped lead the way with a painful, shocking image that stops you cold — a modern Pietá. 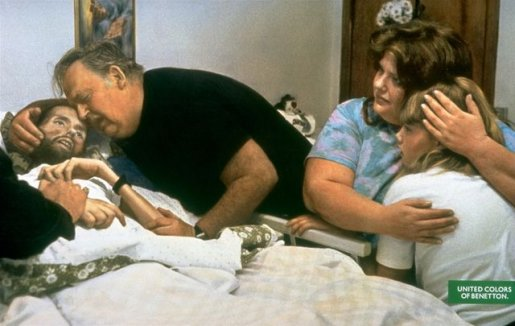 LGBT individuals were not content to suffer for our sins. They were angry. They grew tired of being criminalized, ignored, and left to die. Today, people live with HIV. Back then, they died from it, and they died fast.

As culture became more overt, so did its mirror, advertising. In 1994, Ikea debuted the first overtly gay TV commercial.

The past 20 years have been a rush of our culture moving toward inclusion. The inclusion of LGBT individuals in society has moved faster than any other social justice movement. Acceptance of sexual differences isn’t just common; it’s required. We’re moving toward a condition where the fact of one’s sexual identity just doesn’t matter. It’s all part of the tapestry of difference that we now live.

A tapestry that has grown more intricate in recent years. Not only have major figures such as Apple’s Tim Cook come out of the closet, thus finally ushering equality into the boardroom (and onto the agenda of the World Economic Forum), we are watching our culture tentatively coming to terms with the trans person community as they stride proudly out of the closet. 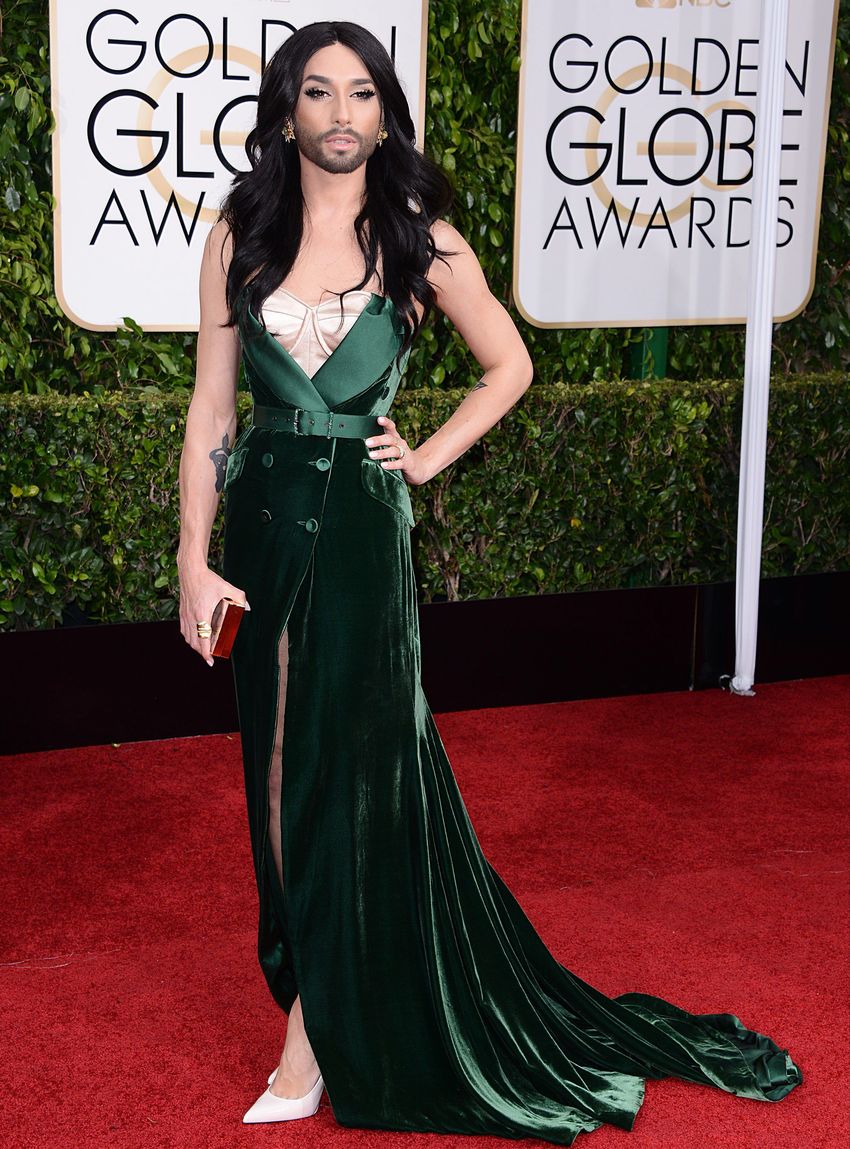 Conchita Wurst shocked the world last year when she appeared on the Eurovision Song Contest. By the end of the competition, shock gave way to seduction. Shows like "Orange is the New Black" and "Transparent" are normalizing the trans person experience for millions — just in time for Bruce Jenner, who is transitioning before our very eyes.

We are, as a culture, transitioning as well, moving toward a cross-cultural society. Strict racial and identity boundaries will be with us forever, but increasingly, we in communications are speaking to everyone at once. We are, says the Census Bureau, soon to be a nation where the majority of us belong to minority groups.

We are, like those boys on the bench that Coke pictured all those years ago, intermingled. Reflecting on this, I’m drawn to an old African proverb. 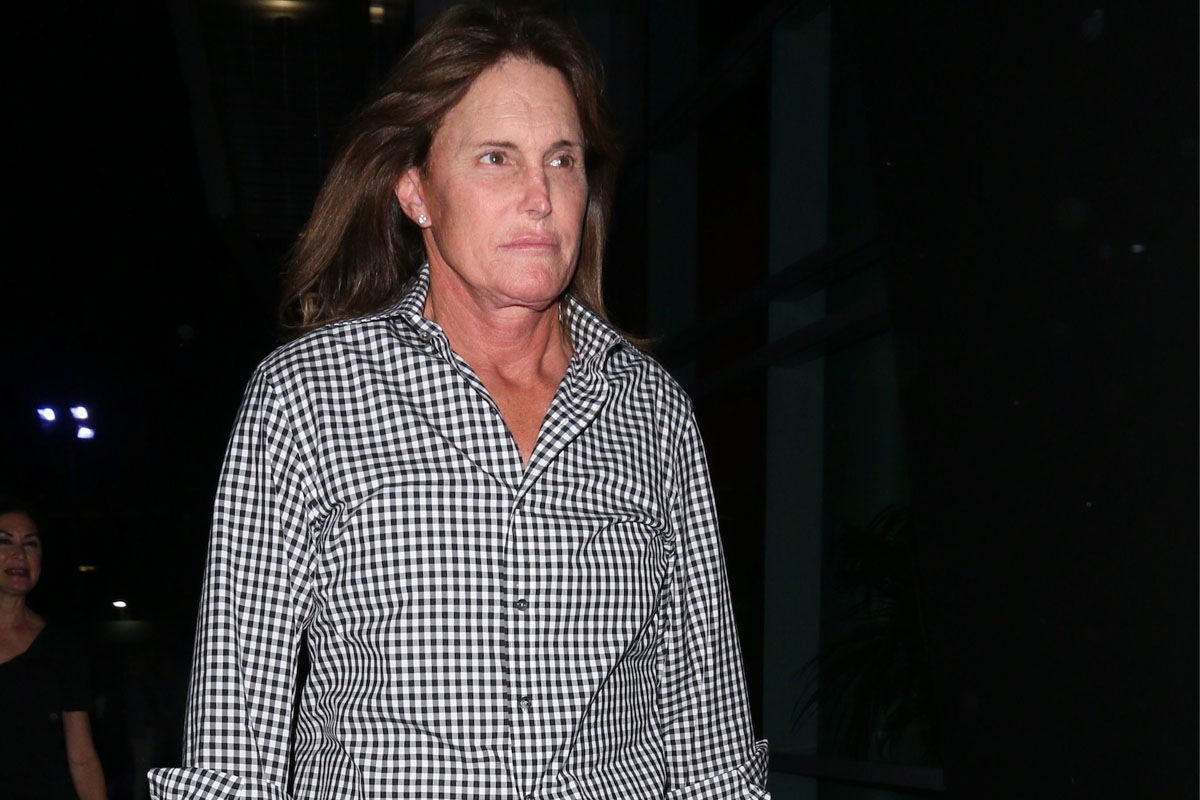 Maybe advertising can lead the way. It can show us that identity is at once core to who we are as individuals and utterly irrelevant to our worth, our dreams, or, as this Tiffany ad shows, our aspirations. 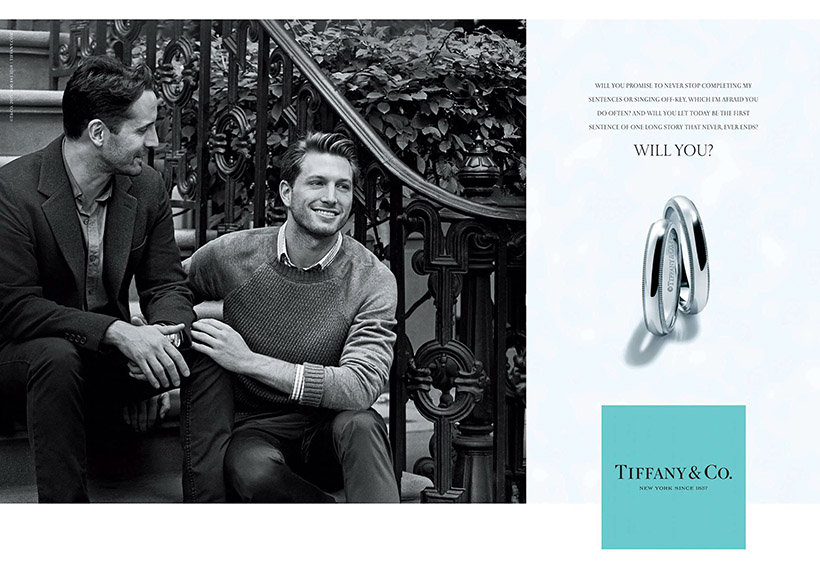 Our culture is the summation of millions of individual relationships. And like all good relationships, it deepens and grows as it matures.

Why brands can't afford to ignore the US Muslim consumer