In so many aspects of our lives, including this industry, inarguable truth is so rare that it has become something to savour.

I spent Saturday taking my two boys to the People’s Vote march. The 10-year-old seemed particularly committed to the chant "Bollocks to Brexit". He had a point.

The march ended in Parliament Square, where a huge banner was unfurled over people’s heads. Shot from the sky, it showed a tweet from David Davis, ex-Brexit secretary and long-time advocator of Brexit: "If a democracy cannot change its mind, it ceases to be a democracy."

Putting (my son’s) political opinions aside, I was struck by the elegant ending to a march pushing for another vote.

Anyone following the creators of this banner, Led By Donkeys, on social media will know what they do. Amid the chaos and confusion that have become the recent norm, they highlight the hypocrisy of certain leaders by presenting their own words back to them. Simple.

These messages hinge on and are driven by the one thing we currently miss most in politics: inarguable truth.

In fact, in so many aspects of our lives, inarguable truth is now so rare that it has become something to savour. Something delicious. 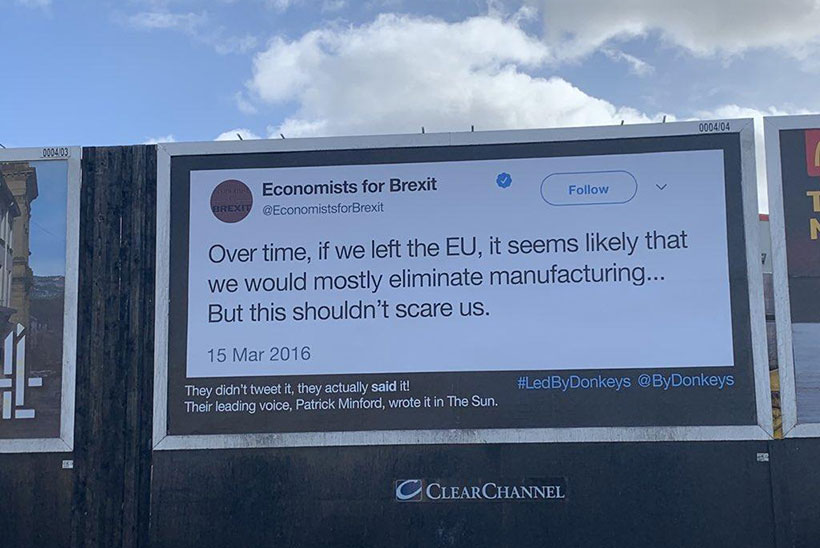 For a long time, it has been at the heart of the best work this industry has produced. We come to work every day and try to think of ideas this good. Then a few blokes who don’t even work in advertising come along and show us how to do it. What do they know that we don’t? Or, more importantly, what do they not know that we do?

Their idea is quite brilliant in its meditative simplicity. I’ve thought long and hard about whether I love these posters more because I’m a Remainer. Possibly. Probably. Ah, fuck it – yes, definitely. But even the most hardened Leaver would struggle to deny the seductive power of inarguable truth, deployed with humour, playfulness and intelligence.

I’ve even donated money to their crowdfunding page. Not because I think it might reverse Brexit. Not as a form of therapy. But just because I want to see more of what they do.

Led By Donkeys have gone from pasting over 48-sheets, guerrilla-style, to using paid-for ad space and special builds. And then on Saturday, in what I hope isn’t a logical conclusion to their campaign, their poster became the focal point of the finale of a national news event. 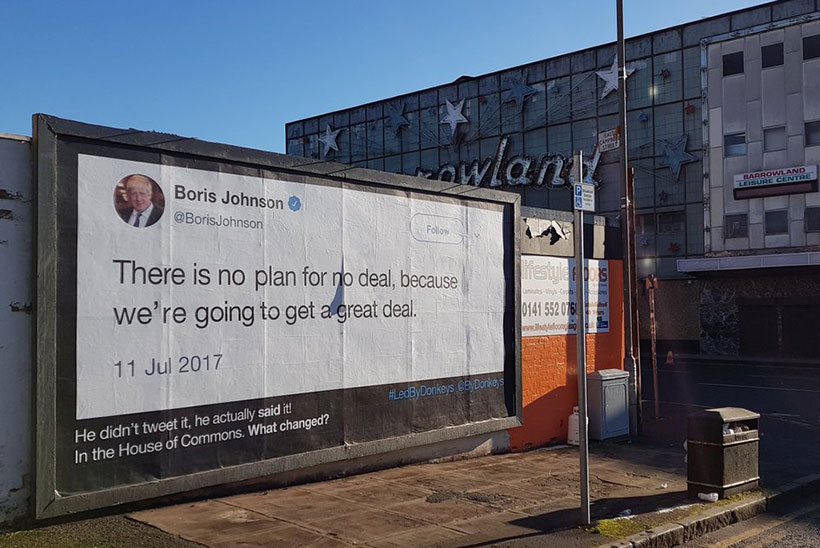 And who didn’t enjoy the clip of Nigel Farage clocking the arrival of a digital van turning up at his "March to Leave" launch? He, along with his followers, were treated to: "If Brexit is a disaster, I’ll go and live abroad. I’ll go and live somewhere else." You could almost feel Nigel’s sphincter clenching at the unavoidable responsibility he has absolutely no choice but to take for his own words.

So, what can we learn from what must be the most powerful, fun, elegant, topical, tactical, political, cultural, cheeky, intelligent political posters we’ve seen for a long time?

Maybe that it’s sometimes better for the copywriter to get out of the way. Maybe that when an idea is this good, you’ll be prepared to put your hand in your pocket to see more. Maybe that timing is everything. Maybe that no-one likes ads, so make your ads less like ads. Maybe that the best communication is honest and truthful above all else. Maybe that when you talk to the right people about something they genuinely care about, you’re really on to something.

Brexit: what's in store for the industry?