A year after the election, 100 women in the industry are still fighting back against the Trump administration's initiatives.

On Feb. 9th of this year, in the middle of a record-setting blizzard, two dozen creatives from almost as many agencies trudged to MPC’s Manhattan office for an off-the-clock strategy meeting. As heavy sheets of snow cascaded across the city, the women talked for hours about fears that had boiled over since President Donald Trump’s inauguration: the defunding of Planned Parenthood, threats to the Affordable Care Act, anti-LGBT legislation, increased deportations. Tired of feeling powerless, they were ready to mobilize in the best way they knew how—through advertising.

"We were in shock and frustrated, feeling like our lives were being taken away," said Kathrin Lausch, MPC’s head of new business and one of the meeting’s organizers. "We wanted to do something to make us feel better and actually use our tools, instead of draining energy on Facebook."

Ten months later, the coalition that grew out of that stormy day has over a hundred members and a name: Never The Less, christened for Sen. Elizabeth Warren’s now-infamous persistence in opposing the nomination of Jeff Sessions as attorney general. The far-ranging network has, since its initial meeting, created assets for Planned Parenthood, partnered with a grassroots women’s health organization and solidified connections between women at every level in their careers. It’s ready to mobilize any time its members feel women’s lives are under threat. Which is always, said Never The less co-founder and former Deutsch NY CCO Kerry Keenan. "There’s a fundamental fear that things are becoming like ‘The Handmaid’s Tale.’" 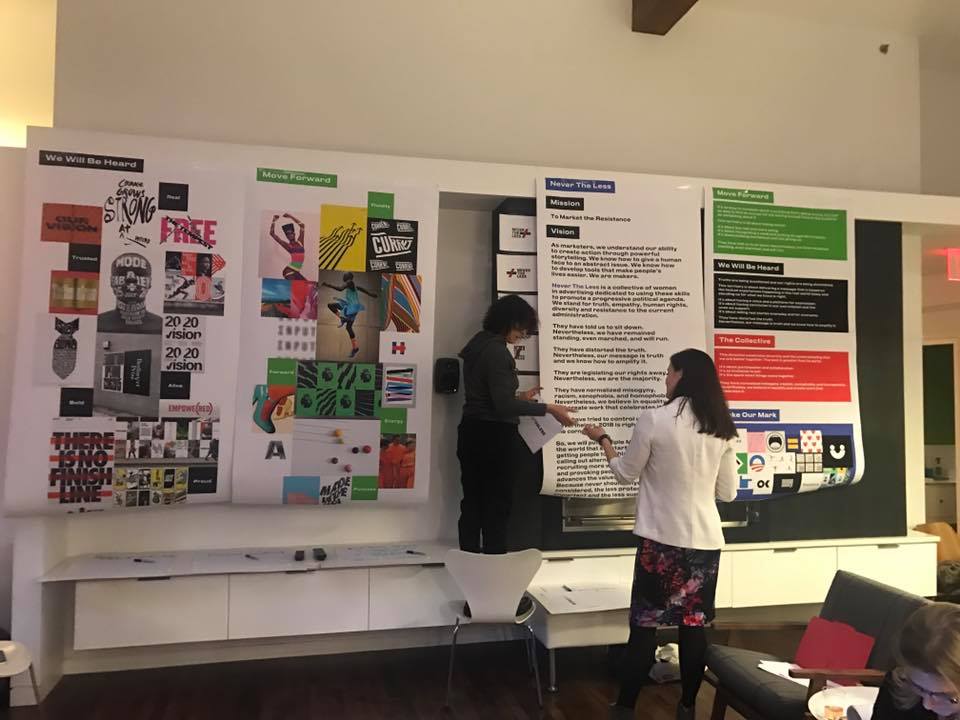 Although they share many mutual friends and colleagues, Keenan and Lausch didn’t meet until last year’s 3% Conference, which happened to be scheduled just a few days before the election. Shortly after Trump’s ensuing victory they met over coffee to regroup, still reeling from a change neither of them saw coming. Keenan had canvassed for Hillary Clinton, and Lausch admitted their industry, at least in New York, is part of the so-called coastal bubble that doubted a racist populist could ascend to power. Anticipating that women would not fare well under a Trump-Pence-Bannon triumvirate, they decided that tapping into their network would be the most effective and efficient way to fight back. 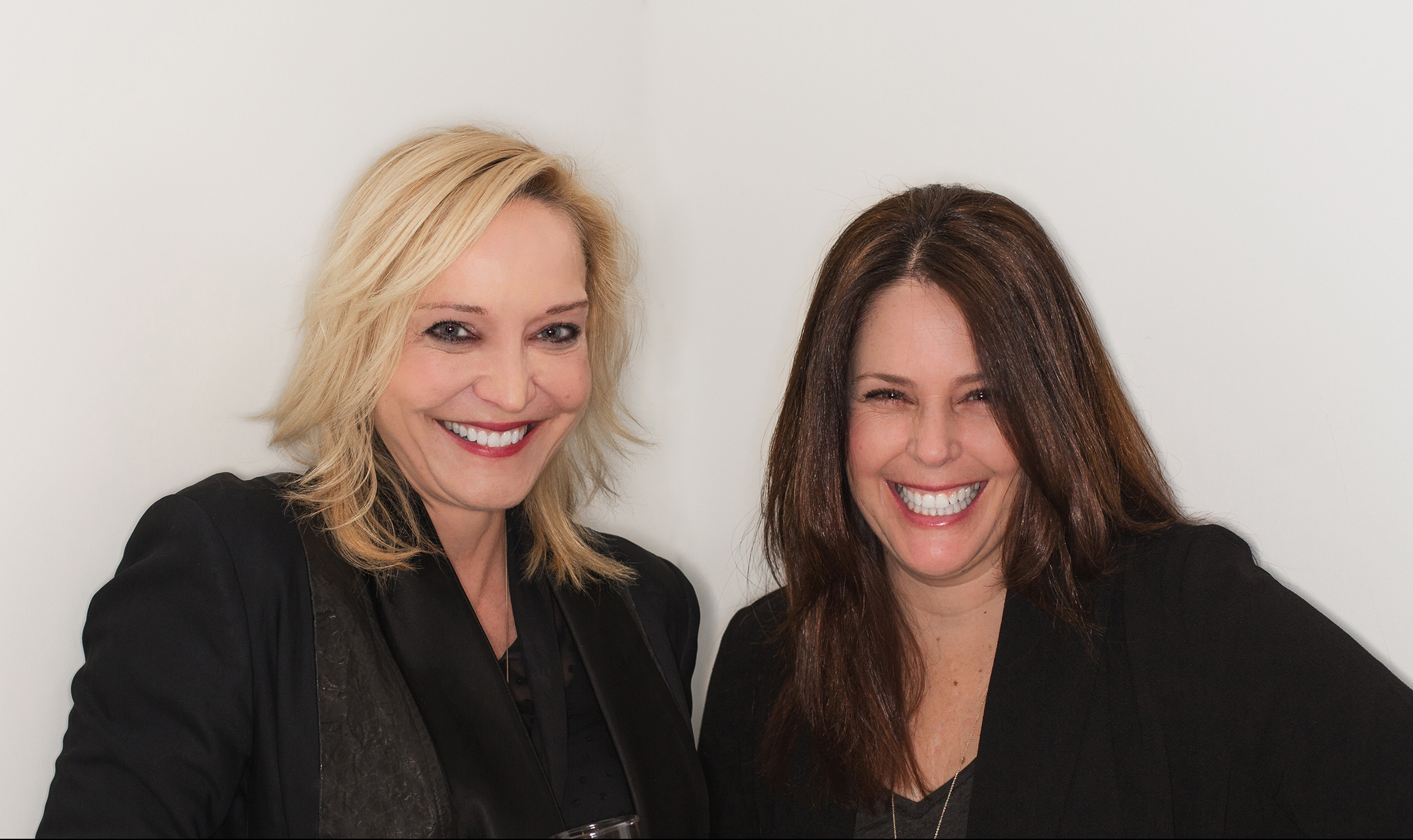 Within a few months, the new president was in office and making swift work in undoing the Obama administration’s largely pro-choice policies. He reinstated and strengthened the so-called global gag rule, prohibiting the U.S. from funding international aid organizations that include abortion in their counseling or services. He nominated a Supreme Court justice favored by anti-abortion activists hoping finally to overturn Roe v. Wade. His party included a partial defunding of Planned Parenthood in its first attempt to repeal the Affordable Care Act.

This was the news cycle raging outside during the February meeting. So when Keenan and Lausch asked the group, comprised of some of the most prominent and powerful women in advertising, what their nascent network should focus on, health care was at the top of the list.

It was the most pressing concern, too, at the second meeting a month later. The group that amassed that day was nearly twice the size of the original, and to the organizers’ surprise, many of them were millennials just starting out in the industry. Quickly, mentorship was emerging as an unintended but welcome aspect of the coalition. "For the first meeting we wanted to bring in powerful, strategic-decision-making women, because we thought we’d need an agency behind it to get something done, but then a ton of people wanted to bring their friends," said Lausch.

By that time, Trump had signed an executive order clearly aimed at decimating Planned Parenthood’s funding, and despite many other concerns—immigration, LGBT issues, the environment—feeling nearly as urgent,  the group identified Planned Parenthood as its priority. "That’s what everyone wanted to work on, and when you have volunteers, you have to let them lead," said Keenan. She and Lausch organized teams and sent them to work.

Over the next three months, Never the Less members—almost all of whom have full-time jobs—brainstormed campaign ideas and, on the back burner, drew up initial branding for Never the Less. On June 13th, they launched a Planned Parenthood social campaign, developed in partnership with a group of entertainment industry women in Los Angeles. organized by former CBS chairwoman Nina Tassler. The one-day push replaced all of the nonprofit’s logos with what Keenan called "the longest brand name ever"—"The Center for Reproductive Health Care for Women Needing…" followed by a list of the dozen-plus services they provide "…also known as Planned Parenthood." 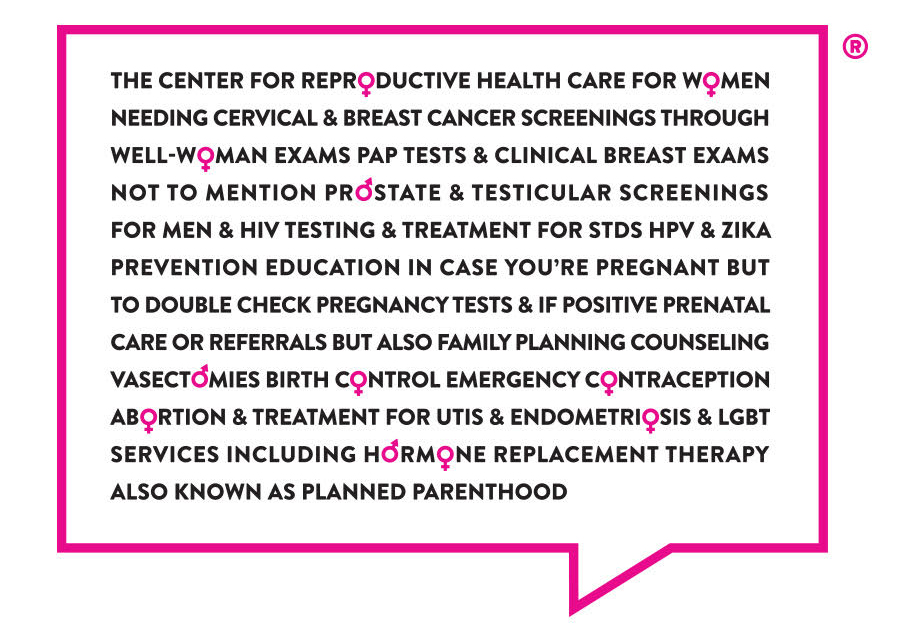 Having successfully executed such a wide-reaching campaign for a national brand, the volunteers were eager to continue. In August, at a now-monthly meeting held at Cutters Studios in SoHo, Never the Less member Amy Zarin piped up to say she had an idea for the group’s next project: supporting Raising Women’s Voices, a nonprofit working to improve health care access for women of color, low income women, and LGBT people. Zarin, who now works at the nonprofit after retiring from advertising, told her colleagues that RWV needed help cutting through the cloud of the GOP’s multiple failed campaigns to gut the ACA.

"There’s been so much publicity that would lead many people to think that the ACA has been repealed or is no longer the law, and we needed to spread the word that open enrollment is still happening," Zarin told Campaign US. "I felt like with the women who I met through Never The Less, there was a high potential for things to actually get done." Specifically, RWV needed video content, which was too costly and complex for in-house production.

Three Never The Less members volunteered and soon met with Zarin. The development process was quick, she said, and more successful than even she expected. "This wasn't about doing maybe the most exciting and splashy creative work—it was about doing something that's really going to help people," she said. "They took the time to understand the issues we're dealing with so they could create something that will really work for the consumers we're trying to help." The result will arrive later this week.

This kind of collaboration and lightning-fast turnaround has also impressed Zoe Kessler, a senior art director at Barton F. Graf who’s been collaborating with Never The Less for several months. "Women in general are really driven and not lazy," she said. "When you’re in a space that’s mostly men, you work even harder to get those things done you need to get done, so when we bring together a highly motivated, highly talented group of women, we can take on almost anything." Several members of the group have gotten involved in Coverage Campaign, a BFG initiative she helped to create that invites other agencies to help combat the Trump administration’s gutting of ACA advertising budgets. While Never the Less is not involved in an official capacity, members were eager to help Kessler when she mentioned her project at the same meeting Zarin introduced RWV. 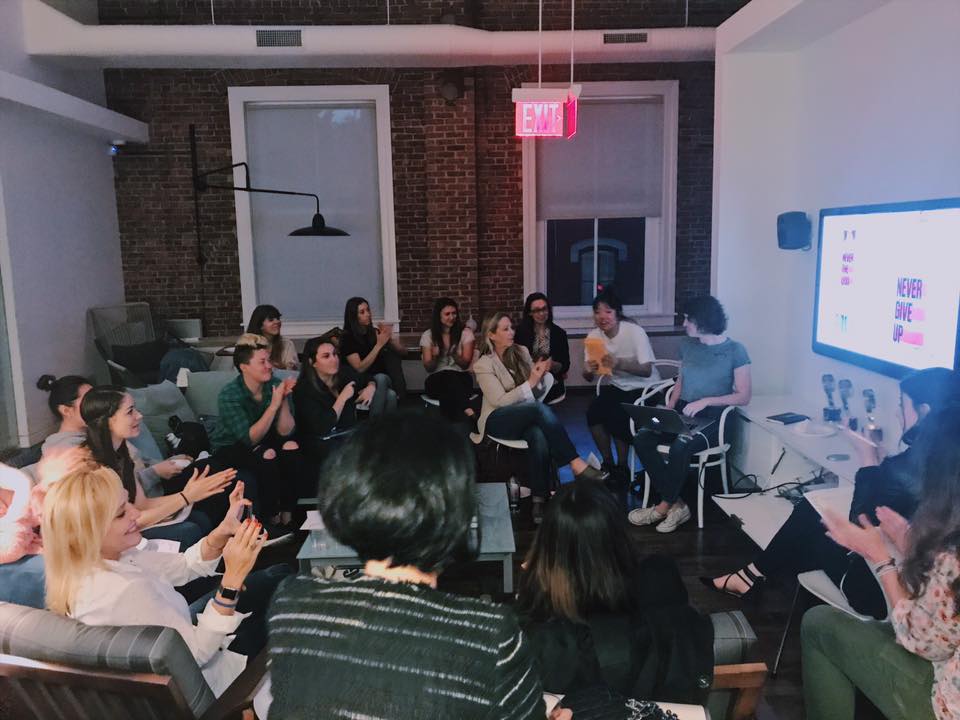 Although health care advocacy has so far dominated the group’s activism, Keenan’s eyes are trained on the long game: next year’s congressional races, at both the state and national levels. "It’s easy to forget that 2018 is what really matters," she said. "If we can flip the house we can actually slow down and tackle problems more efficiently rather than as a barrage that’s happening all the time." Those campaigns will be new territory for Never The Less, which so far has operated on resources from its members’ agencies—none of which are in a position to stake out a political stance.

Regardless of the outcome of those projects, Never The Less has become a force of its own, to the point where Keenan and Lausch are considering whether to make it into its own agency or consultancy. "We would love to have more conversations with brands about creating content that’s meaningful and takes a stand," said Lausch. "We have the creatives and tools to do that, and it’s an interesting time for brands."

But beyond any one brand or campaign or candidate, Keenan said that Never The Less proves an important point: a group of women in marketing can, and should, try to make change. "This has reminded me what it is that we as an industry do so well, which is talk to people and understand where they come from," she said. "That’s where the advertising community has a unique advantage to help heal this divide. And we’re not usually known for that—we’re known for just selling stuff.

One year in Trump's America: what advertisers and marketers have learned about the rest of the country

How amplified consumer voices are changing the role of brands

Trump them all: Five things the 45th president shows us about using emotive language

Tecate VP on last year's border wall campaign: 'It's not about politics'

Stubborn politicians get flooded by women's health facts via fax