Following the success of The Lego Movie in 2014, the UK box office expectations for The Lego Batman Movie wouldn’t be met if its publicity didn’t help it appeal beyond a younger, family audience by demonstrating that the movie was both funny and "not just for kids".

To achieve this, it was decided to target a young adult audience on Channel 4 with "Continuity Bat" – a content partnership that made Lego Batman a continuity announcer on Channel 4 in the run-up to the movie’s release in February 2017.

This resulted in the creation of 18 different continuity announcements, which were specially written and animated to introduce Channel 4’s biggest shows and showcase Lego Batman’s legendary belief that he is awesome at everything.

Custom-built for results at scale

"Continuity Bat" was vital in showcasing the movie’s humour to an older target audience at scale.

It was not only created in collaboration with the creators of the film and the broadcaster to feel like a natural part of Channel 4’s on-air branding (something that wasn’t easy to execute, as you’ll read later), it was also a piece of content-led marketing that didn’t just run for one ad break then disappear.

"Continuity Bat" ran across four days in primetime, ensuring that it was seen by the volume of audience required to make an impact, but also that the character was given enough exposure for viewers to get a feel for his personality and the tone of the movie.

Measuring the success of specific marketing campaigns around movie launches is difficult as there are so many factors that drive the decision to go to see a film at the cinema (including its stars, whether it’s part of a franchise, and critics’ reviews).

That’s why independent research consultancy BDRC International was commissioned to specifically measure the influence of "Continuity Bat" on the decision to go and see The Lego Batman Movie among those who saw it on Channel 4.

The data on those who booked a ticket to see the movie as a result of seeing "Continuity Bat" could then be combined with the total volume of people who saw the campaign, to identify a box-office ROMI that specifically reflected this partnership in isolation from the rest of the movie’s launch campaign.

Despite the breakout success of Lego Batman as a supporting character in The Lego Movie, a key challenge for this campaign was that The Lego Batman Movie was not a sequel to the earlier release.

It would be Lego Batman’s first standalone theatrical movie, so the character needed to stand on his own two (square) feet.

…against an improbable adversary 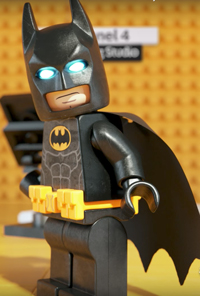 In addition, Lego Batman faced the unlikeliest of foes in the race for UK box-office supremacy: Fifty Shades Darker’s Christian Grey – a rival who was also a handsome millionaire (with a penchant for masks and secret lairs) and had a movie launching on the same weekend.

With Fifty Shades Darker threatening to steal both mothers and the 16-34 audience that makes up the majority of UK box-office revenue (this age group accounts for 50% of all UK cinema takings), the success of The Lego Batman Movie depended on him appealing beyond a family audience.

Therefore, it was decided to dial up the comedy and target young cinemagoers through a unique partnership with the top converting commercial TV channel for 16- to 34-year-olds: Channel 4.

Lego Batman is a comically egotistical superhero, in no doubt about his own ability to be brilliant at anything (despite the audience seeing that this is very obviously not true).

The campaign was therefore based on bringing out his best/worst personality trait, and on the highest-profile platform possible.

Lego Batman would barge in as a self-appointed station announcer on primetime Channel 4 to show everyone just how easy a job it is.

It was at this point that Lego Batman encountered another challenge: Section Nine of the Ofcom Broadcasting Code. Among other things, the principles of this section include:

Channel 4 comes into its own

To ensure Ofcom compliance, Channel 4 put together a solution in which Lego Batman would appear within the commercial breaks before the shows he introduced.

It also restructured its ad breaks so the end of Lego Batman’s introductions would be immediately followed by the show he’d just introduced, or by one of the existing Channel 4 continuity announcers, who would then interact with Lego Batman’s announcement in the ‘real’ programme intro.

To make the partnership as contextually relevant as possible, Channel 4 also allowed its branding to be used in the animated intros and secured permission from the makers of some its most famous shows – including Hollyoaks and The Jump – for Lego Batman to mention them by name.

Getting the studio and voice talent on board

With all this in place, Warner Bros. in the UK then had to negotiate with the US studio to have actor Will Arnett, the voice of Lego Batman, agree to record custom-written announcements, and for the movie’s creators to animate them all from scratch.

This meant securing a significant amount of recording and animation time to create pieces of animated content that could be used in just one of the 52 countries in which Warner Bros. was releasing the movie.

Nonetheless, with the idea having been conceived to revolve entirely around Lego Batman’s personality and feel like a natural part of Channel 4, rather than a crowbarred brand tie-up, the studio and Arnett both enthusiastically signed up.

The outcome was a set of 18 Lego Batman intros for Channel 4’s most popular shows. Some were show-specific, while others could be used for multiple shows in the same genre, such as Houses or Cooking.

Across four days (from 5pm on Thursday 2 February to midnight on Sunday 5 February, the weekend before the movie’s release) these announcements were used to introduce 50 primetime Channel 4 shows.

Lego Batman even took over Channel 4’s official Twitter feed to comment on the shows he’d introduced and responded to tweets from viewers while they were being broadcast.

While "Continuity Bat" contributed to that success, there were also many other factors in play. However, BDRC International measured the impact of the Channel 4 activity.

Making Lego Batman feel like part of the channel, rather than just a star advertising his new film, delivered impressive results:

Convincing evidence of the campaign’s success, as far as the judges were concerned. But ask Lego Batman why he thinks "Continuity Bat" was a winner and you’ll get only one answer: "BECAUSE I’M BATMAN. AND YOU’RE NOT."